Erdoğan and Trump on different frequencies 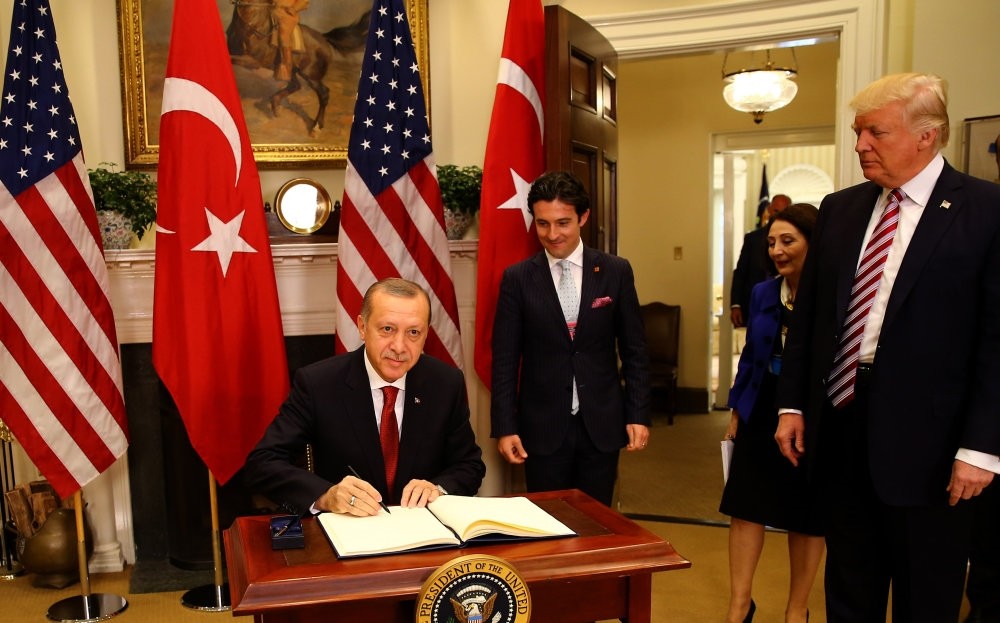 President Erdou011fan signs on the U.S. guest book in the Oval office of the White House during his first visit to Washington since Donald Trump became the president, May 16.
by İlnur Çevik Sep 20, 2017 12:00 am

Considering the hefty differences between Erdoğan and Trump's demands from the U.N., it's impossible to expect the two leaders to reach a common understanding in their next meeting

Trump wants the U.N. to function like a well-oiled business establishment and get his investment back, which means the world body should be effective but should serve the interests of the select. Erdoğan wants the world body to change its system of decision making and overhaul the Security Council so that international justice is served.

On Monday, Trump made his long-awaited debut at the U.N., opening his remarks with a critique of the world body and a boast about a successful business deal he made across the street from its New York headquarters.

Trump has been a harsh critic of the U.N., but with world leaders and foreign ministers, including President Erdoğan looking on inside the U.N.'s packed Economic and Social Council Chamber the U.S. president did soften his words.

Trump endorsed U.N. Secretary-General Antonio Guterres's plan to reform the U.N. "In recent years, the United Nations has not reached its full potential because of bureaucracy and mismanagement," he said.

"While the United Nations on a regular budget has increased by 140 percent, and its staff has more than doubled since 2000, we are not seeing the results in line with this investment," he said. "But I know that under the secretary-general, that's changing and it's changing fast."

However, this is not the change that President Erdoğan is looking for. Erdoğan also agrees that the world body needs a major administrative overhaul but besides this he demands a fundamental change in the Security Council which takes all the vital decisions to preserve world order.

He feels that with its current set up where the five permanent Security Council members, the U.S., Russia, China, France and Britain have the vote power, justice is not served properly which deepens international problems instead of solving them.

That is why Erdoğan keeps repeating to the U.N. General Assembly that "The world is greater than five" and demands an overhaul of the system starting by scrapping of the veto powers of the Security Council members.

He says despite the fact that there are 1.5 billion Muslims in the world; there is not a single Islamic state as a permanent member of the Security Council, which is also an injustice.

Under these circumstances it is very hard for the U.N. to be an honest arbitrator or a source of hope for the oppressed of the world to find justice. This is exactly where President Erdoğan and the American leader differ. Trump wants a well-oiled machine that will serve the interests of the U.S. while Turkey seeks more fundamental changes.