Macron, Barzani playing their own game 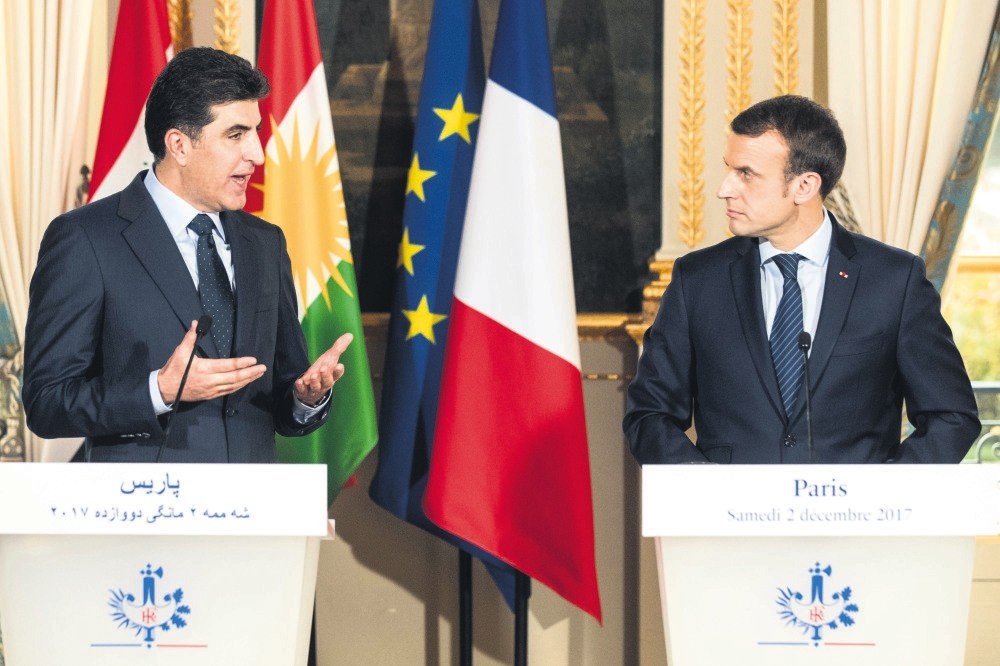 French President Emmanuel Macron and Iraqi Kurdish leader Nechirvan Barzani recently met in Paris in an empty gesture that will hardly make any impact on the crisis surrounding the Kurds of Iraq whose so-called independence referendum last September resulted in a massive fiasco.

When Barzani came through the Habur gate and entered Turkey from Iraq, Ankara was buzzing with speculation that Barzani would meet Turkish leaders. Yet, as long as the Iraqi Kurds fail to declare the illegitimate referendum and its results as null and void, that is pretty much impossible.

So just like they used to in the 1990s, Iraqi Kurdish leaders have to travel to Habur, enter Turkey, take the road to the Turkish southeastern city of Diyarbakır and from there fly to Istanbul and then travel abroad to Western countries. Turkey, Iran and Iraq have closed their airspace to planes traveling to Irbil and Sulaymaniyah, which has simply isolated the Kurds of Iraq.

Thus, Nechirvan Barzani flew to France to seek some much-needed support from the French president, but besides nice words and encouragement Macron can hardly offer anything.

Nechirvan is trying to play to the Iraqi Kurdish public opinion that his isolated enclave in Iraq still commands some respect in Western capitals. He is trying to find some legitimacy and sympathy but all this is rather hallow as the man in the street in the Kurdish areas of Iraq know very well that the referendum was a terrible mistake and the people of the region have to pay the price for the mistakes of the Barzanis.

Sources close to the Kurdish diaspora in Paris have told us that Macron on his part was under intensive pressure from the pro-Kurdish lobby in the French capital to meet Barzani. So he has appeased the lobby. Yet, that is all he did.

Nechirvan is still playing for time. At a press conference after meeting Macron he said, "We are now in a brand-new phase, the referendum is something of the past. We will now chart a new course as the Kurdistan Regional Government [KRG] of Iraq. We respect the verdict of the Iraqi Federal Court to cancel the independence referendum."

However, Nechirvan and other Kurdish leaders simply cannot bring themselves to say the "referendum is null and void." They don't understand the fact that once a referendum is held and not declared invalid afterward, and instead you just say you "respect" the decision of a court to declare that referendum null and void, then in fact you are not saying much.

Nechirvan and his colleagues among the Kurdish leadership have to accept that the referendum is invalidated along with its results. Or else, in an opportune time in the future, they can bring the referendum results back on the agenda and demand secession.

Nechirvan knows this very well. He is just playing a subtle game of trying to put everyone to sleep and when the time comes he will try to resurrect the referendum.