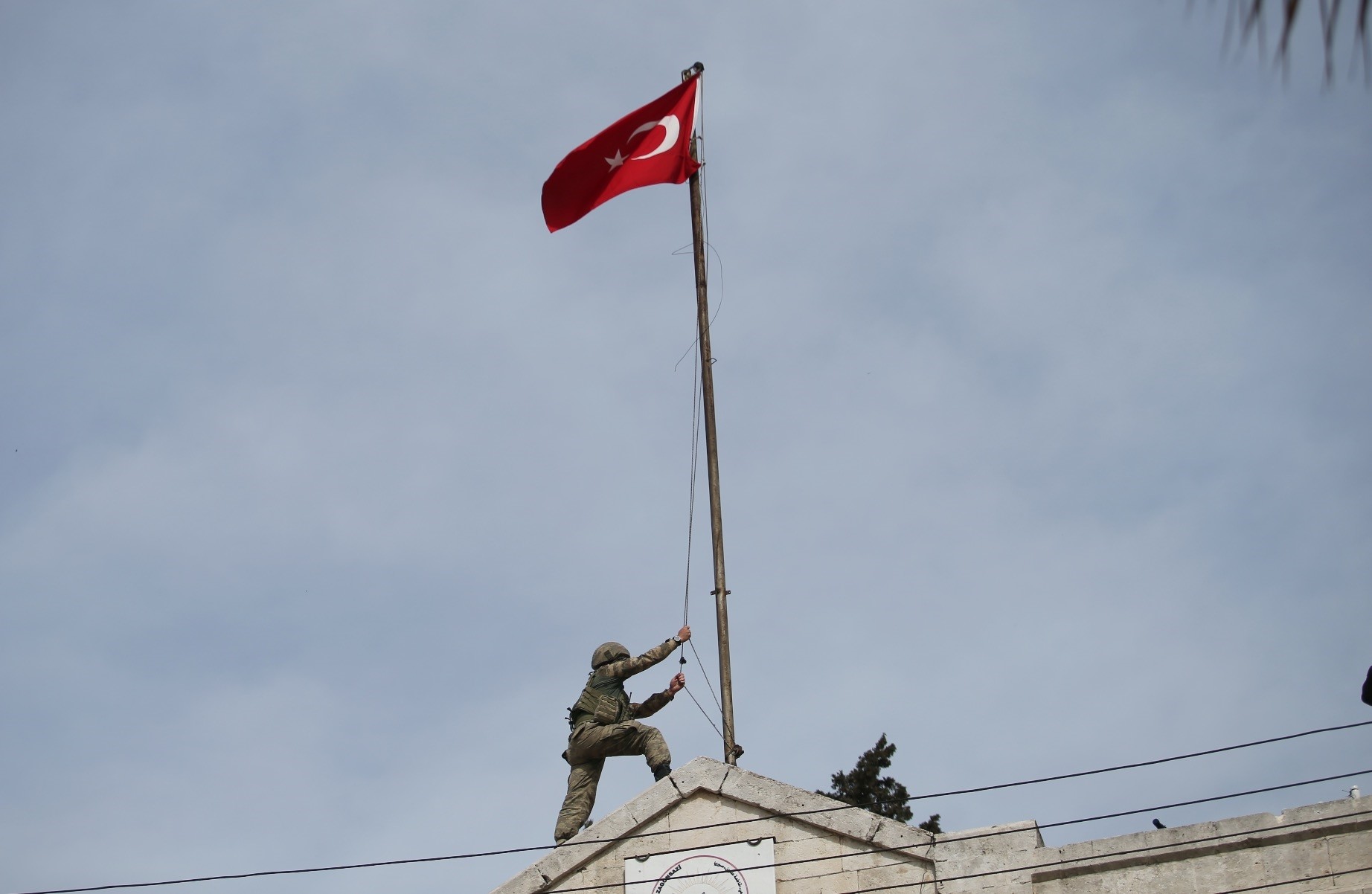 A Turkish soldier hoists the Turkish national flag on a building after after it was liberated from YPG terrorists as part of Operation Olive Branch, March 18.
by İlnur Çevik Mar 19, 2018 12:00 am

On Sunday Turkish forces and the Free Syrian Army (FSA) liberated the city of Afrin in this northern Syrian enclave and pushed the PKK terrorists and their affiliates out of the region.

The liberation of Afrin coincides with the 103rd anniversary of the famous Battle of the Dardanelles that ended in a victory for the Ottomans who battled the allies led by Britain. There the world powers had ganged up against our forces but had been treated to a humiliated defeat. So the message to the West was clear. We bashed you at the Dardanelles 103 years ago but you failed to take a lesson from this. Now you have ganged up against us in Afrin supporting the PKK and its affiliates despite the fact that the PKK is on your list of terrorist organizations.

So now on that very day of the Dardanelles victory we are giving you another message by liberating Afrin. You cannot push the Turks around. You cannot jeopardize our national security. If you do then we just march on and undertake any sacrifice to protect our vital interests. We did that before, we did that in Afrin today and we will do it in Manbij and the east of the Euphrates in Syria tomorrow.

The PKK had enslaved the people of Afrin with its Marxist-Leninist kind of rule and the Americans and the Europeans simply turned a blind eye just because the affiliates of the PKK in Syria were fighting against Daesh.

The West led by the Americans did everything in Afrin to stall Turkey but failed. They tried to help the PKK with a smear campaign claiming that Turkish forces and the FSA were hurting civilians. The perception campaign failed. They tried to claim Turkey had used chemical weapons against the people of Afrin but that too proved a big lie. They even claimed the PKK had diverted its attention to Afrin and had lost interest in the fight against Daesh thus Turkey was accused of jeopardizing the fight against Daesh. The Americans failed to mention that Daesh is already dead in Syria and there is no real fight.

Only on Friday the PKK spread lies that Turkish war planes had hit a hospital in Afrin and the fake photos of this alleged incident were distributed to the world through The Associated Press (AP), Reuters and Agence France-Presse (AFP). Now they are all red faced because everyone has seen that when Afrin was liberated the hospital was unharmed and remained fully intact.

Now the real show will begin. The West hardly took notice on how Turkey liberated the Syrian Arabs lands just south of its border in Operation Euphrates Shield in 2016. They did not even bother to see what had happened in the region after the area was cleared away from Daesh. Yet, Turkey mobilized all its resources in the region, rebuilt the destroyed infrastructures in Jarablus and al-Bab, created municipal services, trained the locals to run their own local administrations and created a mini-safe area in northern Syria. Now the same will be done for the Afrin region.

Turkey will rebuild and heal the social wounds created first by the Assad regime and then by the PKK. Then Turkey will handover Afrin to the people of Afrin to run their own administration.

Turkey took extreme care not to harm civilian settlements and cities during the Afrin operation. It did not overrun cities and reduce them to rubble like the Americans did in Raqqa. That is the difference between being a perennial neighbor to these people and arriving here from thousands of miles away and not caring because these people are not your neighbors.