US trying to downplay Afrin fiasco 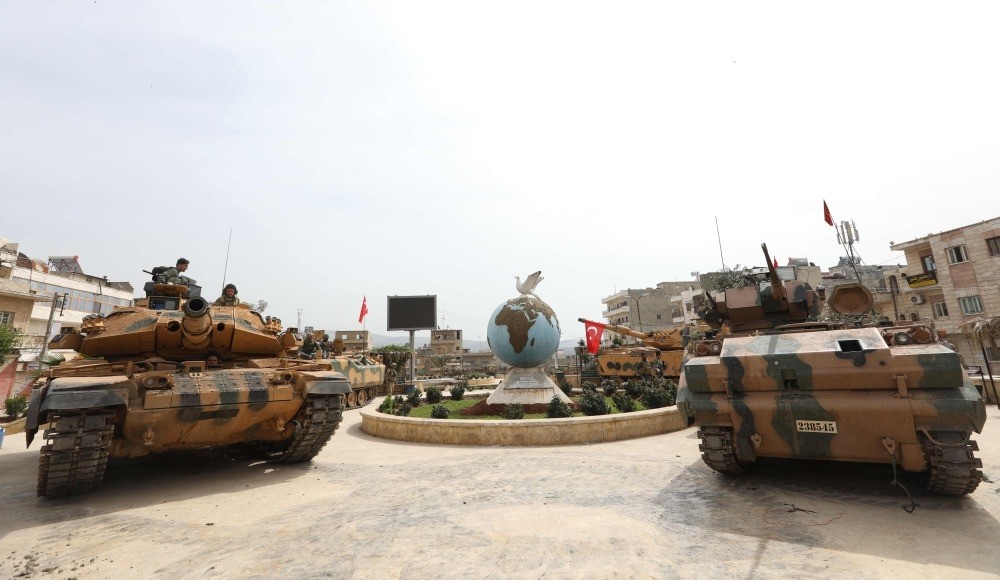 Turkish soldiers gather in the city of Afrin in northwestern Syria after taking control over it from the YPG in cooperation with the Free Syrian Army.
by İlnur Çevik Mar 21, 2018 12:00 am

The humiliating defeat suffered by the YPG, the PKK's Syrian branch, in Afrin has shown that the Pentagon wasted billions of taxpayer dollars on a colossal failure

The victory scored by the Turkish Armed Forces (TSK) and the Free Syrian Army (FSA) is also a great fiasco for our American allies who armed the PKK and its affiliates to the teeth with modern weapons, created massive concrete defenses for them and trained them to face modern armies.

Yet it is clear the PKK and its affiliates, the forces of the Democratic Union Party (PYD) and the People's Protection Units (YPG), were hardly a match for the TSK and its Syrian allies because the PKK and its hordes are simple terrorists who cannot fight a decent war. They are cowards who kill innocent civilians and soldiers by setting up traps.

The Americans made a colossal mistake by relying on terrorists to fight other terrorists. Thus, they gave the YPG heavy arms to fight Daesh or the so-called Islamic State. Today our forces have recovered huge arms depots full of modern American weapons, they have captured bunkers and other giant concrete defenses financed by the U.S. and other Western powers. All a huge waste of American tax payers' money.

It is clear that the Americans played on the wrong horse and thus deserve to suffer this fiasco.

But now the American spokesmen, the U.S. media and some opinion makers are trying to run a smear campaign which is really sad.

Those who until last week were claiming Turkey was bogged down in its Afrin campaign are now the same people who are saying the victory in Afrin is not such a big deal. They now say the TSK was far more superior to the PKK's Syrian branch and that the outcome in Afrin was a foregone conclusion.

So how does anyone explain why the YPG terrorists abandoned their American provided arms worth millions of dollars and just took off without a proper fight?

The same goes for the FSA. Now they are claiming that this force is in essence a gathering of al-Qaeda and Daesh terrorists. They seem to forget that all the fighters of the region wear the same clothing and brandish the same arms. The fact that Turkey has created a viable fighting force out of the Syrian Arab opposition seems to be the envy of the Americans who failed to do this in the past.

Then there is the fact that Turkey and the FSA have approached the local people with affection and compassion. Yet, the same American sources are claiming there is a threat of the local Kurds being subjected to ethnic cleansing.

That is really absurd. Turkey has rushed to the help of the needy in Afrin, it has mobilized the Turkish Red Crescent and the resources of the Disaster and Emergency Management Authority of Turkey (AFAD) to provide all kinds of humanitarian aid and relief to the peoples of the region.

The Americans would be better advised to concentrate on the ongoing atrocities still being committed by the PKK and its affiliates all over Syria. Afrin is now in safe hands thanks to Turkey.

The Americans should keep the PKK at bay. On Monday, PKK/PYD/YPG terrorists tried to attack the Turkish border outpost near Ceylanpınar in the Şanlıurfa province on the Syrian border. That is the east of the Euphrates where the Americans are trying to create a safe haven for the PKK. Turkey hit back and killed 23 terrorists. Yet this shows not only Afrin but that east of the Euphrates is also the hub of a serious threat to the security of the people of Turkey.