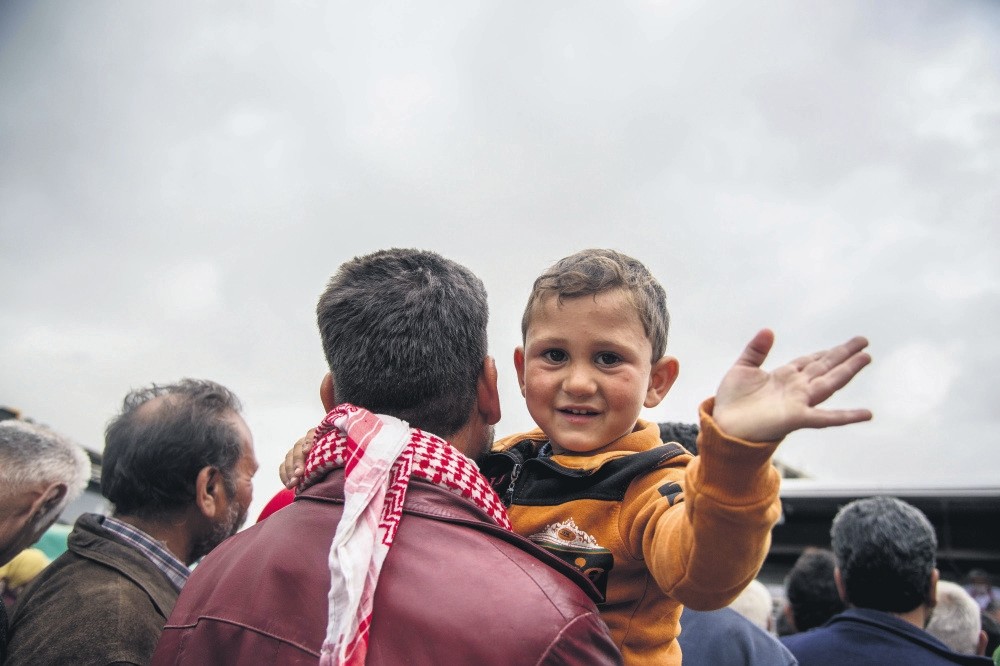 A child waves to the camera in Afrin after the city was liberated by the Free Syrian Army (FSA) backed by Turkish Armed Forces (TSK) in Operation Olive Branch.
by İlnur Çevik Apr 13, 2018 12:00 am

Before Turkey started Operation Olive Branch to liberate Afrin and throw out the PKK's Syrian affiliate People's Protection Units (YPG) from the area, international nongovernmental organizations were eager to provide aid and relief to the region with billions of dollars.It is estimated that the relief and aid material distributed in Afrin was to the tune of $1.5 billion. Yet it is also known that most of the relief and supplies did not actually go to the suffering people of Afrin, but to the militants of the Democratic Union Party's (PYD) YPG militia.

What was given to the terrorists and their affiliates was not just food supplies, but also other material like arms and ammunition. The NGOs included IMPR-Humanitarian, Catholic Relief Services (CRS), Danish Refuge Council (DRC), World Vision, International Rescue Committee, (IRC) the Norwegian Refugee Council (NRC), the People In Need and Irish Aid.

The people of Afrin were left on their own to sustain themselves.

It is sad that foreign governments are using such NGOs more like an extension of their political system and espionage outfits. They serve their governments instead of addressing humanitarian considerations.

Unfortunately, we have seen similar irresponsible actions by some foreign NGOs in Turkey, even among those that are supposed to be providing relief for the 3 million Syrian refugees who fled to Turkey to escape the regime's brutality.

The people of Afrin are bewildered as they see that the foreign NGOs disappeared from the city and its environs overnight to leave the people of the region with no relief or aid.

But that is not so. Turkey has rushed to the help of these people with all its resources. First, the Turkish Armed Forces (TSK) entered Afrin and provided medical help to the local people. All the people in the liberated towns and villages had medical screenings and children were treated and inoculated. Then, the Disaster and Emergency Management Authority (AFAD) stepped in and for weeks has been tending to the needs of the people there. The head of AFAD, Dr. Mehmet Güllüoğlu, has been visiting the area on a weekly basis and overseeing the relief work. The people of Afrin are being well taken care of. The Turkish Red Crescent is also busy providing relief in the region.

Turkey has mobilized its resources to create a safe environment for the people in Afrin and thus help some of the Syrian Kurdish refugees who sought safety in Turkey to return to their homes. Turkey has no intention of staying in Afrin forever, and when the conditions are right, will hand Afrin back to the people of the region, who are predominantly Kurds.

What is sad is the performance of the foreign NGOs in the region and the hypocrisy they have shown.