Washington insists on blowing up the Middle East 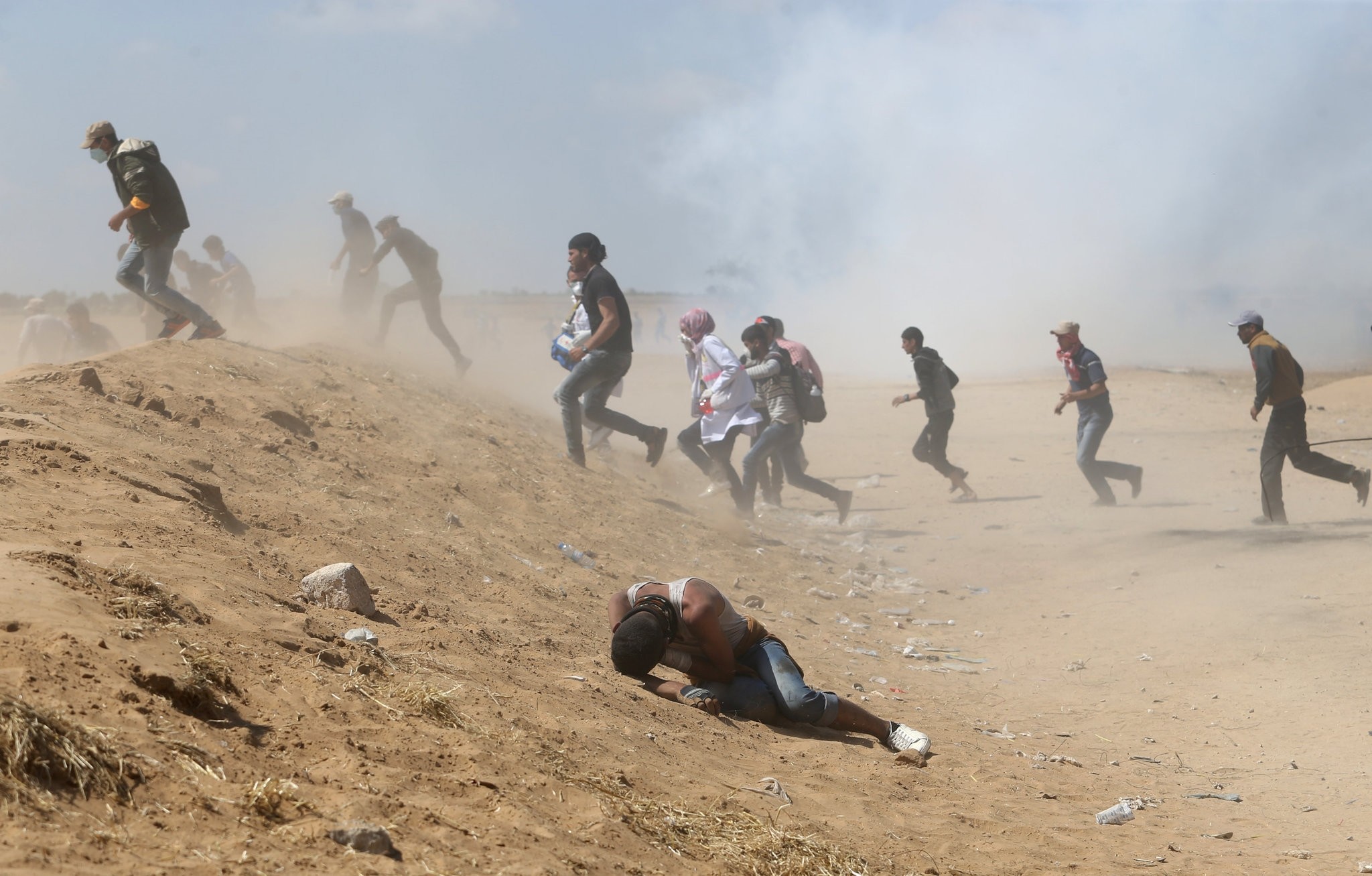 A Palestinian demonstrator reacts as others run from tear gas fired by Israeli forces during a protest marking the 70th anniversary of Nakba, at the Israel-Gaza border in the southern Gaza Strip yesterday.
by İlnur Çevik May 16, 2018 12:00 am

Whatever U.S. President Donald Trump is doing, he's not sowing the seeds of a peace solution in the Middle East but rather he is destroying any hope of any kind of peace process.

He has effectively taken Jerusalem off the table – handing it to Benjamin Netanyahu on a gold plate. Or at least that is what he thinks he is doing. He does not see that with the Jerusalem card off the negotiating table in the Middle East peace process the Palestinians are left with nothing to discuss with Israel or anyone else.

This is the most irresponsible statesmanship that has been displayed by any world leader in modern times and it is putting world peace at risk.

Trump has given the go ahead for the Israelis to display intransigence at the highest degree, shooting at unarmed flag waving Palestinian demonstrators, killing 61 of them and wounding at least 2,000 others. The Israelis had the audacity to say this was an act of self-defense and the Americans supported this. But the world did not. The Israelis even went as far as to claim some Palestinians in the crowd had fired upon the Israeli forces.

A BBC commentator openly asked the Israeli government spokesman "if this is the case then why is it that only one soldier was slightly wounded while scores of Palestinians died and were wounded on the other side?" The Israeli was lost for words.

The Israelis are completely on the wrong track. Trump has pushed them into the fire and yet they have been blinded with the euphoria of the opening of the American embassy in Jerusalem.

Some Arab countries like Saudi Arabia, the United Arab Emirates and even Bahrain had started warming toward Israel and even going to the extremes of turning their backs on the Palestinians. Now those states are caught in an impossible situation. They cannot fall behind Israel when it comes to Jerusalem not because they are so loyal to Islamic values but because they fear their own public opinions will turn against them.

Israel was trying to unite some Arabs to counter Iran's expansion in the Middle East but with the mess created by Trump in Jerusalem that too will have to be put aside.

Trump and Netanyahu can rejoice today but tomorrow will be a different picture.

President Recep Tayyip Erdoğan, just back from a visit to the United Kingdom, will make sure to spare valuable election campaigning time for the sake of Jerusalem, to rally the Islamic nations to stand up against Trump and his Jerusalem flop.

Turkey has declared a three-day mourning period for the martyrs of the latest Israeli attack on Palestinians and has called its ambassadors in Washington and Tel Aviv back home for consultations. Turkey will now bring together the leaders of the Islamic world to declare a new action plan against the U.S.'s move and Israel's massacres. Then Turkey will seek action with the United Nations.What Trump has done is a favor to Erdoğan. President Erdoğan has united Turkish public opinion on Jerusalem and thus created a positive atmosphere that will help him in the presidential elections campaign. Even opposition candidate Muharrem İnce has gone as far as to demand that Turkey recall its Washington ambassador.

Trump continues to make fatal mistakes in the Middle East and Erdoğan is trying to clean up the mess.