What if Israel had held pastor Brunson? 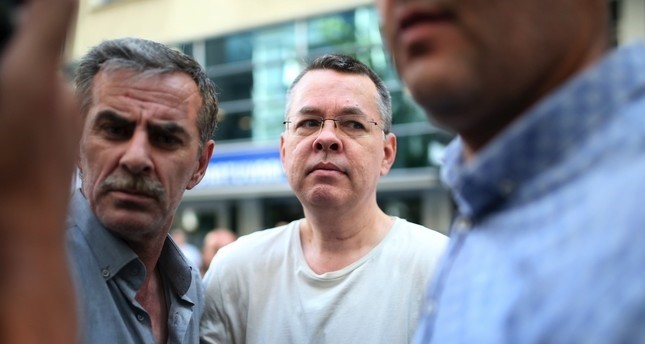 The U.S. evangelical pastor Andrew Brunson, who has been under house arrest due his active involvement in terrorist campaigns in Turkey, is appearing in court today in u0130zmir province.
by İlnur Çevik Oct 12, 2018 12:00 am

Resolving the Brunson dispute may not completely end all the problems between Turkey and the U.S. but it will surely pave the way for drastic changes

Today, a high criminal court in the Aegean port city of İzmir will be hearing the case of pastor Brunson, who is accused of collaborating with terrorist groups in Turkey.

There are high expectations that the court in İzmir may actually release the pastor and thus defuse an explosive situation between the U.S. and Turkey.

The issue was blown out of proportion in the last few months actually threatening the alliance between Ankara and Washington with President Donald Trump spearheading the campaign against Turkey by ordering sanctions and threatening the Turkish government.

The case came to a boiling point when the İzmir court decided to release the pastor from jail but ordered him to remain under house arrest. The American administration expected the pastor to be released and sent back home.

Of course, the elimination of the Brunson case or some positive developments in this regard may not erase all the hitches we are experiencing in Turkish-American relations. There are still many outstanding issues, especially the American support given to the militants of northern Syria who are offshoots of the PKK terrorist group that has been waging a secessionist campaign in Turkey for the past four decades.

What is sad is that Washington is not eyeing Turkey from the same window, as it does some of its vital allies like Israel.

Would the U.S. and President Trump treat Israel the same as they have done Turkey if pastor Brunson was arrested in the Jewish state.

Something like that could happen. There are Christian clergy in Israel and in Palestine who feel strongly about the way Israel treats the Palestinian people. It would not be a great surprise if a pastor with American citizenship was arrested by the Israeli authorities and required to stand trial because of their ties with Palestinian groups that Israel regards as terrorists.

They could well say that the pastor had collaborated with Hamas. Would Washington display the same sensitivity towards Israel that it has been displaying against Turkey?

We doubt that strongly.

Look at the recent case in Israel where a young American girl of Palestinian origin wanted to enter Israel with her student visa to do post graduate studies but was denied entry to the Jewish state and is now under detention at Ben Gurion Airport.

The American reaction to this incident to say the least has been lukewarm. U.S. spokesmen say Israel has the right to decide who enters the country. No one questions why an American citizen has been detained for a week in an airport cell.

Let us hope Turkey and the U.S. sort out the pastor incident and concentrate on more pressing matters.