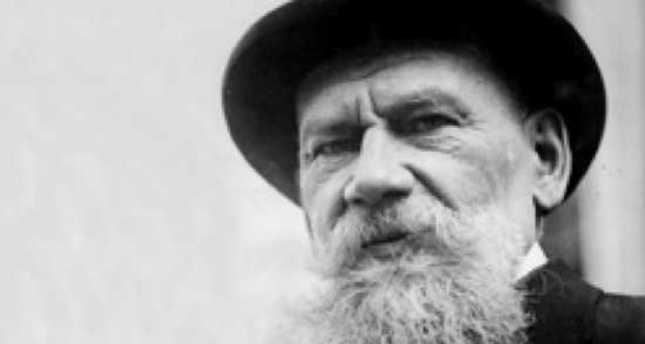 Leo Tolstoy was not only the author of some of the most important novels in the history of literature, but also a thinker and a researcher who attempted to understand the causes of major historical changes and events. "War and Peace," beyond narrating the story of several prominent families, philosophizes on war and the historical changes that took place in 1800s. Tolstoy was extremely skeptical about the "great man" theory, which argued that history was shaped by the impact of individual leaders, generals, and commanders.
Instead, he emphasized the role of the will of ordinary individuals and/or their resistance toward the will of others as the most significant dimension of historical transformation. By planting the seeds of nonviolent resistance, Tolstoy became a source of inspiration for leaders and theorists such as Gandhi.

Tolstoy's thoughts on change and politics are now being challenged in Crimea, where he served as an officer during the Crimean War, the war that inspired him to write his most significant work. After a change of government in Ukraine was brought on by protests and demonstrations, Russian President Vladimir Putin emerged as a major actor who may shape the path of the conflict. He has already crafted an ideology and governance of his own, Putinism, in Russia, a country that controls not only thousands of nuclear warheads but also the second largest oil reserves in the world.

Putin came from a generation of statesmen who witnessed the fall of the Soviet Union - an empire that he and many of his peers hoped to revive when Yuri Andropov became the General Secretary of the Communist Party. The fall of the Soviet Union not only brought disorder and instability to Russia, leading to tectonic shifts in the geopolitics of Eurasia, but also became a major source of international humiliation for Russians like Putin that lasted over a decade. After assuming the presidency, domestically Putin acted to provide order and stability and to ensure the survival of his regime.

Internationally, his policies toward different countries and his attitudes toward other world leaders reflected the profile more of a prestige-seeker than a powerseeker, as a man who wanted to be recognized as a major power broker and game changer.

Putin partly achieved this goal by using his veto power in the United Nations Security Council and gaining subsequent diplomatic victories during the war in Syria. Given his actions in Ukraine, Putin not only singlehandedly negated the positive image Russia gained during the Sochi Olympics, but also caused significant shifts in the geopolitical and strategic calculations of different states around Russia.

Putin's attempt to invade Crimea demonstrated that he is ready to use force whenever Russia's interests are at stake and illustrated the cost of anti-Russian foreign policy to Russia's neighboring states. His willingness to use force may cause countries in the region such as Poland to take precautions before engaging in bold foreign policy moves. Putin's intervention in Ukraine may also send mixed signals to the Middle East, particularly to hopefuls in the al-Assad regime, who may interpret the move as a show of commitment to friends of Russia. Under both circumstances and interpretations, however, the crisis in Ukraine may lead to the most significant break between Russia and the U.S. since the Afghanistan War from 1979 to 1989 and the isolation of Russia in the international community.

The attempted or actual invasion of Crimea after the 2008 Georgia crisis created an increasing degree of insecurity in the Central Asian nations as well, some of which also have a sizable Russian minority. In recent years, China challenged Russia's influence in Central Asia due to its investments and trade relations with Central Asian nations. Recognizing the potential threat of China in this region, Putin has ruminated about forming a Eurasian Union. After the events in Ukraine, most of these Central Asian nations will reconsider joining such an organization and more likely align with China in order to pre-emptively balance a possible Russian intervention.

As evidenced by recent events, one man may change a great deal in terms of strategic foreign policy calculations of different nations. And as such, Putin's actions in Ukraine have created many varied interpretations and concerns about the future of politics in the region.