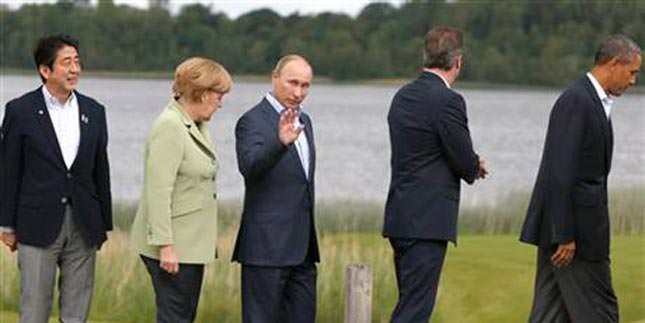 Mike Tyson, the former heavy weight boxing champion, once said that everybody has a plan until they get punched in the mouth. After the punch, all previous plans become obsolete as you have to react to the situation. After the match you start asking yourself how you did not see that coming.

Tyson's quote later became one of the most cited statements in the books of strategy as it indicated the necessity for preparedness before receiving a blow from rivals or competitors.

The lack of strategy of Western powers towards Russia became obvious with the crisis in Ukraine. After the Russian invasion of Crimea, it was revealed that neither Europe nor the U.S. had a strategy on how to handle a potential crisis in Ukraine even before Putin's "punch" to Crimea.

In fact since the election of Medvedev to presidency in 2008, most U.S. foreign policy makers misread the situation and power balance in Russian politics. In 2008 when Obama and Clinton were competing to win Democratic Party's candidacy for the presidential elections, in a televised debate, neither of them were able to answer the question: "What is the name of the newly elected president of the Russian Federation?" - the only name that was known and mattered for foreign policy makers in the U.S. in regard to Russia was Putin. However, during the first term of Obama's presidency, for four years, they tried to do business with Medvedev. U.S. foreign policy makers had never interacted with him before and he did not really have much power and influence in Russian politics. It was a serious miscalculation on the part of the U.S. administration and failure to understand the politics of Russia.

As a result, policymakers in the U.S. were startled by most of Russia's foreign policy stances, including the last Russian invasion of Crimea. In fact, last week, it was leaked that National Intelligence could not project the invasion of Crimea, despite the escalating crisis in Ukraine and the massive military maneuver of Russian military in the south. Since my column last week on the crisis, neither the U.S. nor the EU were able to provide a solution for the problem regardless of the diplomatic attempts by Secretary Kerry and President Obama's two phone calls with Putin.

On the other hand, the analysis of the events in Washington with respect to the events in Ukraine mostly depended on historical analogies.

Those who are critical about Obama's policy in Ukraine in particular, increasingly utilized Cold War analogies and a Cold War discourse. Republicans accused President Obama of being too soft on Putin (unintentionally praising Putin's toughness) while failing to show any form of leadership in the global system. The Democratic Party's historical analogies were even older, extending back to the pre-World War II period. Clinton, the most prominent candidate for the 2016 elections, made an analogy between Hitler and Putin with reference to Hitler's invasion of Sudetenland. There was a message in this for the Obama administration to refrain from appeasing the Russian threat and act tougher against Putin. In addition, the most significant names of the Cold War era, including Henry Kissinger, Zbigniew Brzezinski expressed their opinions and proposed some solutions to the problem.

The most surprising aspect of these debates and analogies was to see that Russian actions actually ruffled the American foreign policy establishment. Apparently, no U.S. agency or institution with the exclusion of Sarah Palin, were expecting such an move from Russia. Though now it sounds like the wishful thinking behind "reset" shadowed the reality and led to miscalculation. However, Russia's policies towards Syria in the last three years, was enough to signal Russia's increasing assertiveness in foreign and security policy. In addition to its support for the regime at the U.N. Security Council, Russia sent an immense number of weapons to Damascus to help Assad destroy opposition forces. In fact, the Syrian opposition mostly fought against Russia's heavy weapons and ammunition. Despite the Assad regime's attacks on its own cities with SCUDs and barrel bombs, its use of chemical weapons and crimes against humanity towards its own people, Russia during this period never felt direct pressure by Western governments to stop its support for Assad. Some argue that Syria's significance for Russia is linked to its concern for possible threats that certain radical groups may pose to the stability of southern Caucasus. Yet, Syria was more of a test case for the Russian government to be more assertive and aggressive in terms of its foreign policy. The U.S. and Western inability to react and resist Russia's policies in Syria partly encouraged the Putin government to try more direct forms of military intervention. In this sense it is almost impossible to consider both issues separately, because the United States' deterring effect on Russia has faded with its inaction in Syria, despite Kerry's statement that all options are on the table to deal with Russian action in Ukraine.