US and the Gulf after Camp David 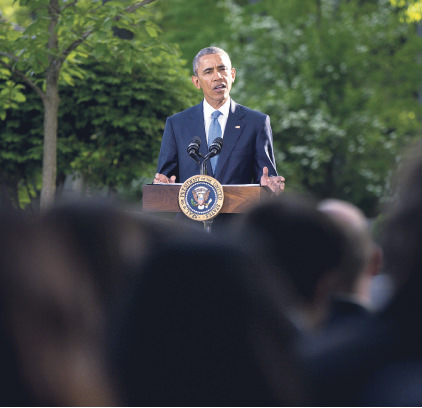 In the aftermath of nuclear talks between Iran and P5+1 countries, the U.S. is facing a more complicated relationship with Gulf countries. It seems that the Camp David summit was not very successful in refreshing Gulf countries' confidence in the U.S. as a diplomatic ally

The meeting of Gulf leaders with the U.S. administration ended last week. Once again - despite some rhetorical good will messages following the meetings - it seems that not much has changed in regards to U.S. relations with the Gulf countries. For the most part, the final declaration repeated the security interests of the U.S. and its partners in the region; however, at least according to the public statements, problems that arose between the U.S. and other Gulf states following the Iranian nuclear deal were not totally resolved. The only positive development was a statement of support by the Gulf countries in regards to the Iranian nuclear deal if the security interests of these countries are properly met. At least for cosmetic reasons this statement helped President Obama; however, again it is important to remember that skepticism is still there and will remain so.

Following the meeting, Gulf leaders returned to their countries without a security agreement or more integrated air defense systems to balance the potential threat from Iran. According to reports, instead there will be substantial military assistance for these countries that may include weapons and systems that will provide security against maritime threats, possible missile strikes and cyberattacks. However, even these types of support and verbal commitments during the press conference did not entail a binding U.S. commitment to protect the territories and citizens of Gulf countries if they are attacked by Iran. Most probably, such an outcome was obvious during the preparation phase of the meeting, and it might have had a big role in King Salman's change-of-mind and some other Gulf country leaders with regards to attending the meeting. This cancellation also demonstrated problems in the organization of the summit.

Of course, securing a security alliance with the U.S. against Iran was the most significant issue at the meeting, as the invitation to these leaders was publicly extended in the immediate aftermath of the framework agreement between Iran and the P5+1. However, what complicates relations between the U.S. and these states and what made the Camp David meeting extra challenging was the existence of multiple problems in the triangle of Iran, the U.S. and the Gulf countries. Consequently, when the Iran issue was being discussed with the Gulf countries, the nonproliferation of this country and its nuclear program was only one of the variables. In fact, although the most significant agenda item at the meeting was the Iranian nuclear deal and the concerns of Gulf leaders about the conventional threat posed by the Iranian regime, other very significant issues, including the war in Yemen, the civil war in Syria and the war against ISIS in Iraq, were behind the thinking of all these leaders. Although the U.S. administration, since the beginning of the nuclear deal with Iran, tried to isolate other policies of the Iranian government, including its actions in Syria and its human rights violations, from the nuclear issue, for the GCC members these issues are all part of a bigger problem of Iranian expansionism in the region.

A second problem during the meetings was the concerns of the Gulf countries about the commitments of the U.S. and its vision of developments in the Middle East. Six years ago after a period of serious discord between the U.S. and the Islamic world due to the war in Iraq and the problems in its aftermath, President Obama addressed the Arab world in Cairo and signaled the beginning of a new era between the U.S. and the people in this part of the world. There were high hopes in the Middle East about a serious revision, damage control and confidence building in relations between the U.S. and the Arab world. However, in a short period of time it turned out that most of what was said during this speech was rhetorical, and there was not much policy preparation or strategy design to match the rhetoric.

The pivot to Asia resulted in major concerns for some Gulf States. Many during this period considered that the geopolitical shift in the focus of U.S. foreign policy would generate "losers" and that the Gulf countries would be among those states. The increasing discovery of oil and natural gas in different parts of the world, most significantly in the U.S., also weakened one of the pillars of bilateral relations. Following the Arab Spring, the U.S. position of "being on the right side of history" was considered yet another major commitment of the U.S. administration in regards to developments in the region. However, with the crisis in Syria, the U.S. demonstrated a confusing indecisiveness and disappointed its allies in the region by signaling a "green light" for the regime by following the policy of inaction against Assad regimes and its crimes against humanity.

In Syria, what was more challenging for the Gulf countries was the lack of any U.S. reaction to increasing Iranian destabilizing actions in Syria during this period. Through its Quds force, Hezbollah and volunteers, Iran was funneling money, weapons, ammunition and foreign fighters to Syria under the nose of the international community. Gulf countries once more felt abandoned by the U.S., and this time they also felt their lack of strategic outreach capabilities like the Iranian regime in the region. In the four years of the Syrian civil war, in different instances, such as the red line incident, the Gulf countries felt again and again U.S. unwillingness to act in accordance with its commitments. However, they also understand their lack of capability to conduct an independent foreign policy. This understanding resulted in a paradoxical situation in which the Gulf countries felt abandoned by the U.S. and reached an understanding that it will be hard to conduct foreign policy without U.S. cooperation.The Iranian nuclear negotiations were another blow to U.S.-Gulf relations. A few years before the beginning of the rapprochement between the U.S. and Iran, Wikileaks documents revealed the concerns of Gulf countries concerning a nuclear deal between the U.S. and Iran. After the lack of military action in Syria following the use of chemical weapons, negotiations between the U.S. and Iran have become another major shock for Gulf countries. One more time, relations suffered from the failure of revision and restoration after changes in the region and the international system.

One of the critical junctures in relations between the U.S. and Gulf countries took place with the fight against ISIS. The rise of ISIS and its increasing threat to the region and international security was regarded as a common threat for both Gulf countries and the U.S. that could bring these countries closer together under the umbrella of a military coalition. At the beginning, there were even some who thought that this could be the beginning of a new strategic alliance between the U.S. and Gulf countries. However, soon after increasing Iranian influence in the fight against ISIS in Iraq, a new wave of skepticism emerged among Gulf countries about relations between the U.S. and Iran. On top of the disagreement over Syria, skepticism in Iraq and tension in the Gulf, when Iran-backed groups started to threaten Saudi interests in Yemen, the Saudi government started using military force in Yemen with the help of some Gulf countries. During this period, the U.S. was reaching the final steps of the framework deal with Iran.In the current circumstances, the U.S. is facing a more complicated relationship with Gulf countries. On the one hand, the aforementioned commitment issue is producing skepticism in Gulf countries. On the other hand, the presence of multiple areas of conflict and different triangular relationship in the Gulf, Iran and the U.S. complicate the situation. Of course in the meantime, the lack of a U.S. strategy towards the region produces more confusion amongst its allies in the Gulf. For the U.S., the Gulf is keeping a significant dimension of its geopolitical significance, due to the possible impact of these countries on the price of oil. In addition, the U.S. considers Gulf countries as a significant part of the fight against ISIS. However, its relations with Iran and President Obama's attempt to reach an "equilibrium" between Sunnis and Shiite groups is generating skepticism that will be hard to overcome in the coming period.