Egypt two years after the coup 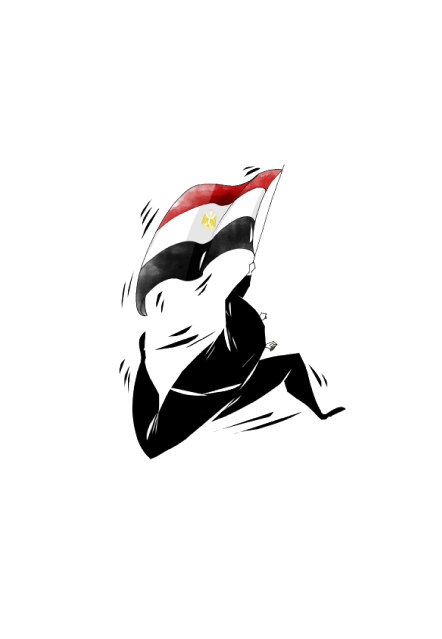 After two years of political suppression, nobody was surprised by the recent decisions of the military junta courts to sentence Morsi and other prominent members of his party to death. It was something that was to be expected by such a regime

When Abdel-Fattah el-Sissi overthrew the democratically elected leader of Egypt, Mohammed Morsi, most observers of the region's politics knew what might come with the military junta. For many years the country lived under the iron fist of President Hosni Mubarak and faced the harshest repression of basic freedoms and liberties. For most of its recent history the country was turned into a prison for political opposition. During these darkest periods of political history, Mubarak tried to acquire political legitimacy by arguing that he was a frontline fighter against radicalism and for the protection of secularism in the country. This period of authoritarianism and dictatorship ended only with the Tahrir revolution, during which the people of Egypt broke down the fear factor that the regime in Egypt had created through its repressive state apparatuses and with inspiration from the developments in its neighbors. The situation after the revolution opened a window of opportunity for the people of Egypt to establish a democratic and pluralistic political system. Morsi was elected president when the revolutionary fervor was still very high and when the expectations of ordinary Egyptians from the new government were way more than the capabilities and power of it. In a very short period of time Morsi started to face the challenges of maintaining the regime and a counterrevolutionary wave from certain segments of society and political system began. Right now it is not very clear what the movement against Morsi wanted from him and his government. However, from the very beginning a significant group within this movement aimed to overthrow the democratically elected president, and they did not have any intention to do it through the normal procedures of elections. While these groups were trying to present themselves as the real democrats of Egyptian society through street protests, both Egyptian society and the international community faced a difficult test. A few days after the protests it became obvious that the demonstrations started to be used by the former regime elements, specifically the Egyptian military, and they were ready to reverse the process of democratization in the country. However, the silence of especially the international community was considered a green light for the military to step in. The welcoming of the military by certain segments of Egyptian society further increased the power of the military.

With the coup two years ago, the military overthrew the government and started to rounded up the members of the government and the ruling political party. For many who followed the developments, the aftermath was just like a horror movie. Against the supporters of a democratically elected president and legitimate political party, the military junta used the most violent techniques of suppression. Because of its failure to control social media, the world watched the ruthless violence and bloodbath on the streets of Egypt. The mosques turned into large-scale morgues and every day the regime, together with its cronies, committed massacres in the main squares of Cairo. Thousands of people died in a very short period of time. The goal of the military junta was very clear. It wanted to re-establish the fear factor in Egypt and stop another wave of protests against the regime. Despite the unacceptability of the situation, those that protested against Morsi for not being democratic enough silently started to re-establish the psychological threshold that they destroyed a few years ago. Western countries failed to strongly criticize the happenings while the U.S. avoided to using the word "coup" to describe the military intervention. Those that played a key role in Morsi's ouster tried to demonize him and his government in order to feel better about their contribution for the establishment of a suppressive regime while some of the Western governments expressed their hopes that the military could restore democracy in Egypt. With internal and international support, the military junta successfully presented itself as the only party able to counter radicalism while institutionalizing its suppressive methods. As a result, the voices of society that ask for political reforms from the regime or protest economic difficulties almost disappeared because of the fear of facing suppression and death and the presidential elections turned into its default authoritarian settings of being unfair and un-free mechanisms of political machinery.

After these two years of political suppression, nobody was surprised by the recent decisions of the military junta courts to sentence Morsi and other prominent members of his party to death. It was something that was to be expected by such a regime. Yes, the regime did not surprise anyone, however despite its track record of supporting authoritarian regimes that can provide stability at the expense of liberty and freedoms, many in the world still hoped that there would be a stronger voice and message from the Western democracies about the situation in Egypt. But one more time many governments in the world preferred to turn a blind eye to the decisions. The only hope here is to generate a campaign of public awareness around the world about the situation in Egypt. Some civil society organizations around the world recently launched a campaign to free Morsi from prison. This is the first step for generating a more meaningful pressure over Western governments about their silence in regard to Egypt and a more effective way of demanding some form of change in their policies on this country. At the end of the day, authoritarian regimes that do not have much source of legitimacy domestically pay attention to its international legitimacy. A strong message from the international public as well as governments can be significant for reversing the wave of repression in Egypt.