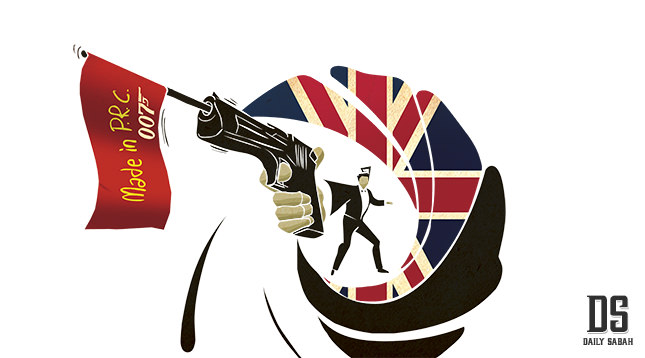 by Kılıç Buğra Kanat Oct 26, 2015 12:00 am
Looking for an economically well-off partner in the international system, Britain shows itself to be courting China with the warm welcome extended by Queen Elizabeth II and the government to President Xi on his latest trip to the U.K.. James Bond, the character created by Ian Fleming, has been one of the most cited and referred to film characters in the world. Almost everyone has heard James Bond's introduction: "My name is Bond ... James Bond" and his title, 007. The way that he holds his gun, his inquisitive mind, his gadgets and his relations with women became one of the most significant popular culture tropes in the world. Bond movies also had something to do with the international system and geopolitics. As Jason Dittmer aptly expressed in his book "Popular Culture, Geopolitics and Identity," these films also had something to say about the international system and Britain's role in it. Unlike other fictional heroes, who are mostly American and most frequently live in American cities or cities that look like American cities, James Bond is British and with his intelligence, sophistication and skills, demonstrates a different dimension of British prowess around the world.

He represents a sleek, smart power in world politics even before the existence of the term in literature. He was not only very good in using force and hard power, but also through his charm most of the time wins the hearts and minds of mostly women, who also play an important role in dealing with and eliminating enemies. He sometime saved the world, sometime helped the U.S. protect itself from threats to its security. As Dittmer said in an interview, "The whole premise of James Bond is that the U.K. is a major player in preventing the overturning of the world order, with the Americans a clumsy, muscular, sidekick to the debonair and suave British Intelligence." If James Bond represented the search for a place for Britain post-WWII, can he find a response to this query since then? The visit by China's President Xi Jinping to Britain and his reception by the British government and royal family demonstrated that Britain is looking for an economically well off James Bond instead of a politically motivated one. In fact, despite its involvement in most of the international crises alongside the U.S. around the world, Britain may be more comfortable to be a reclining middle power waiting for an economic bandwagon in the coming decades.

Although receptions for world leaders and ceremonies are symbolic in nature, they provide a lot of clues about the desired position of that country in world politics and the international system. Years ago, Thomas Friedman wrote about his witnessing of Bill Gates's reception in China. In his book "The World is Flat: A Brief History of the Twenty First Century," he mentioned that Gates received an enthusiastic welcome from thousands in China. This interest in an innovator and computer genius in China, according to Friedman, demonstrates the desired place in the world of the Chinese people and the government for their future. In comparing this situation with the United States, Friedman wrote: "In China today, Bill Gates is Britney Spears. In America today, Britney Spears is Britney Spears- - and that is our problem." The reception of Xi in Britain reminded me of this quote and made me and probably many observers around the world guess the British plan for the future.

Last week, Xi made a historic visit to the United Kingdom. Xi received a very warm welcome from Queen Elizabeth II and the British government. The parties signed important trade agreements and a nuclear deal with an immense amount of media coverage. The visit provided a great opportunity for China's president to solidify his status as a leader of a superpower in world politics. Xi became a celebrity during the four days of his visit. There were all forms of photo ops for Xi, such as a 41-gun salute, a red carpet and a ride with Queen

Elizabeth in her royal carriage, which was extensively used in the Chinese media. The itinerary included all types of ceremonies that showed a leader how majestic it is in Britain, including lavish banquettes and royal welcomes, and that helped him with his own charm offensive, including a selfie with Ronaldo and fish and chips with British Prime Minister David Cameron. Compared to the tense press conference between Xi and

For some, this visit is the beginning of a golden era in bilateral relations between the two countries. For others, this rapid improvement may create some problems in Britain's relations with its traditional allies. Of course, as mentioned above, it is very troubling for Britain to avoid mentioning the human rights issue in meetings with Chinese officials. As Xi became the strongest leader in China since Mao Zedong after his purges and political corruption operations, to have such cozy relations with him can be considered problematic. But for now, the British government seems to be embracing China and Xi as they are. But it is still to be seen whether this warm atmosphere in relations will survive. In fact, although Xi is a rock star in the U.K., he is Xi in China, and that could be Britain's problem later.
Last Update: Oct 26, 2015 11:08 am
RELATED TOPICS