A Nobel is not enough for Kilis, AFAD, local communities 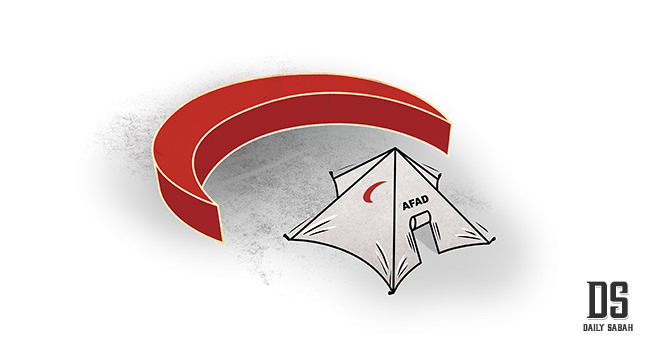 The city of Kilis, its local communities, nongovernmental organizations and AFAD, which all provide for the needs of Syrian refugees in a very systemic way, deserve much more international recognition, than only a Nobel Peace Prize

A year ago in this column after visiting some of the cities on the Turkish-Syrian border and seeing some of the refugee camps run by the Disaster and Emergency Management Authority (AFAD), I wrote that "there is something almost legendary going on in Turkey in regard to the Syrian refugees. This amazing work by AFAD and local nongovernmental organizations deserves better international recognition. They demonstrate what can be done about natural and man-made disasters once there is a hardworking, dedicated and motivated staff with good management and political will. AFAD and local nongovernmental organizations that have been touching the lives of so many for the last four years really deserve a Nobel Peace Prize."

Almost a year after this trip I visited two other cities on the Turkish-Syrian border that were directly impacted by the refugee crises during a period when many people around the world expressed their fascination at how a small border city, Kilis, handled the influx of refugees. After this visit my previous opinion about the crises and the work of AFAD and local nongovernmental organizations was only confirmed. Yes, the city of Kilis, the local communities, local nongovernmental organizations and AFAD deserve a lot of international recognition. They deserve more than a Nobel Peace Prize.

It is an interesting contrast to see the intolerance, fear and anxiety of some European communities about the Syrian refugee wave since last summer and the tolerance, generosity and consideration of the people in Kilis and the public in different cities along the Syrian border. After seeing the desperate conditions of Syrian refugees on their way to Europe, the death of thousands of them on the Aegean and Mediterranean Seas, cities along the border make you somehow optimistic about the future of humanity. A fine example of this, for us on this trip, was Kilis.

OBSERVATION ON THE INFLUX

It is a small historic city that was squeezed between two major cities in Turkey and Syria, Gaziantep and Aleppo. Just a few miles to the border, the city never became an industrialized hub, but instead a classic border town whose economy depends on agriculture and cross-border trade. The population of this small city was around 90,000 and, officially, it still is. However, since the beginning of the war in Syria this town has faced a major refugee influx from Syria. Because it was very close to the border, the town has been one of the primary targets for Syrians who flee the mass atrocities in their country. Turkish authorities established one of the first refugee camps in this city at the Öncüpınar border gate.

At the beginning, many expected that the crisis would end soon and refugees would return to their homes, but since then the crisis has turn into a major civil war with horrifying consequences. With this devolution to war in Syria, the pattern of the refugee influx also changed dramatically. Throughout the conflict, after becoming a safe refuge for the people who escaped the violence, the city also became a destination for transit refugees who were trying to go to other major population centers in Turkey, including Gaziantep, Ankara and Istanbul. Thus the city temporarily housed hundreds of thousands of refugees at different points of the conflict. In the immediate aftermath of the Russian airstrikes the city felt new pressure with the arrival of new group of refugees and accumulation of many more on the other side of the border. As of today the city has almost 130,000 Syrian refugees – almost 150 percent more than local population.

KİLİS: A SHELTER FOR REFUGEES

We visited the city at a critical turning point when there were increasing concerns about security due to several rocket attacks from accross the border. In two different instances the city had been the target of rockets from DAESH. There were legitimate worries about these attacks, but the population of the city was impressively mature about these threats. The locals, the civil society groups that flourished in the city because of the Syrian civil war and local authorities that we interviewed in the city clearly identified the real perpetrators of these attacks and were able to distinguish vulnerable refugees from terrorists. Despite the shock of these attacks, the fear factor did not run the attitude of the locals and authorities on refugees.

When conversations with the local people and authorities turn to the challenges that these refugees bring to the city, many were shy to express them right away. The city's infrastructure and public services were designed to handle and serve a population of more or less 80,000 people; the capacity of the city has been totally stretched beyond its limits. Medical services and educational facilities were hit hardest. The influx of refugees also generated an increase in the prices of real estate and decreased labor costs due to the emergence of an informal economy. The city also took a major security risk, as especially during the major influxes, it was hard to achieve border control and proper screening. However, as mentioned above, even though these challenges were written and expressed by different observers, when talking to local people these challenges were expressed only in a very shy and hesitant manner. Even the most concerned interviewee, after expressing his or her concerns, also demonstrated a significant level of empathy for Syrian refugees. All of the concerned conversations ended with sentences such as: "But we have to remember that that could be us." The flourishing of civil society organizations in the city is extremely amazing. Most of them focused on relief work for Syrian refugees.

DAESH started to attack the city with rockets from the other side of the border while we were there. In downtown Kilis everyone in the city can clearly hear the sounds of rockets and explosions. Eight rockets landed in the city and two people, one woman and one child, were killed. Six rockets hit unpopulated areas. Despite previous attacks, this was the first time DAESH had fired so many rockets at the city. There was shock and fear in the city in the aftermath of the attack, but the people of the city one more time did not give in to fear and did not act impulsively. As the Turkish military started to retaliate against these attacks the sounds of the shelling of DAESH target could easily be heard from the city center.

While leaving Kilis, we were quite amazed by the prudence and maturity of the local people. The contrast with some communities in Western countries was amazing. We also realize that the situation despite all these positive aspects is not sustainable. The city, as many other communities in different parts of Turkey, demonstrated a heroic stand against the violence, war and conflict. The first step of the international community at this point is to properly recognize this stand. At the same time, a second step needs to be taken that will start to share the burden of these local communities. Of course in the short run this needs to be to help cities handle these refugees and start accepting them to their respective countries. But in the long run it is clear that the resolution of the Syrian civil war in a proper manner will be the most important dimension in dealing with the refugee crisis.