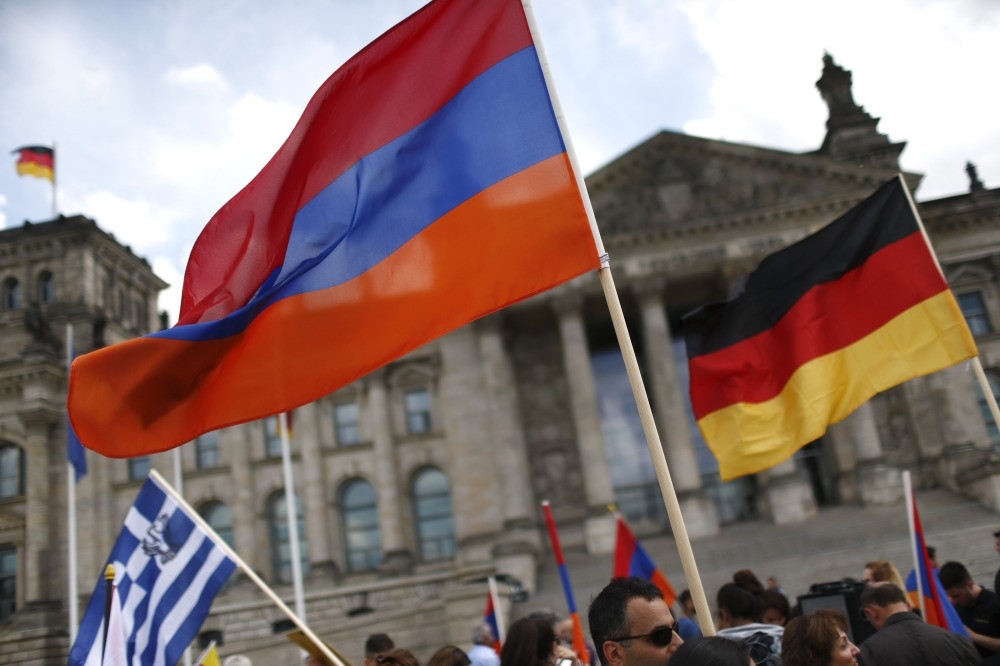 People waving Armenian and German flags in front of the Reichstag in Berlin as they protest in favor of the decision by German parliament that defines the 1915 Armenian incidents as 'genocide'.
by Kılıç Buğra Kanat Jun 04, 2016 12:00 am

The Armenian genocide debate will only end if Armenians and Turks remember their peaceful, shared history in Anatolia

The German parliament's decision to pass a resolution about the 1915 events last week regenerated the debate about the historical events and the relations between Armenians and Turks. For years now the issue has been discussed in some Western capitals, but despite the decades-long debates, countries around the world did not contribute to the peaceful resolution of this dispute and the improvement of relations between two countries and peoples. These debates instead has contributed to negative feelings and opinions on both sides and has prevented the development of neighborly and friendly relations. Several policymakers around the world even tried to utilize the issue in their policy disputes in Turkey. It has been used as a bargaining chip in bilateral relations.

One of the first positive development in this dispute took place a few years ago. A few years ago, then Prime Minister Recep Tayyip Erdoğan sent a letter to the Armenian people expressing condolences and emphasizing the shared pain of the all people who suffered from the consequences of World War I. This letter still provides an important road map for the resolution of this dispute among the former subjects of the Ottoman Empire in an already unstable region. It was a first step for the alleviation of this tension and beginning of the commemoration of the human suffering. Although the Armenian side did not respond positively to this, the letter is still an important opportunity for the future of relations between the two nations.

In his letter to the Armenian people, Erdoğan first extended his condolences to the grandchildren of Armenians who lost their lives in the events of 1915. H also said that all Ottoman subjects suffered from the pain of the events in those fateful years of world history, and all of this pain needs to be recognized. "It is indisputable that the last years of the Ottoman Empire were a difficult period, full of suffering for Turks, Kurds, Arabs, Armenians and millions of other Ottoman citizens, regardless of their religion or ethnic origin. Any conscientious, fair and humanistic approach to these issues requires an understanding of all the suffering endured in this period without discriminating as to religion or ethnicity." Erdoğan also mentioned not discriminating between the pain and not trying to prioritize the suffering of the people. In the letter, he said: "Certainly, neither constructing hierarchies of pain nor comparing and contrasting suffering carries any meaning for those who experienced themselves." Finally, one of the most important parts of the letter was his stressing shared pain and dialogue. He said: "The incidents of World War I re our shared pain. ... In today's world, deriving enmity from history and creating new antagonisms are neither acceptable nor useful for building a common future."The German parliament's decision and the regeneration of the debate in a way that will increase tension does not help any people in the region. Armenians and Turks have lived together in this region for thousands of years and continue to be neighbors. The historical problems may help the improvement of relations between them when the two nations start to commemorate their shared pain and tragedies.