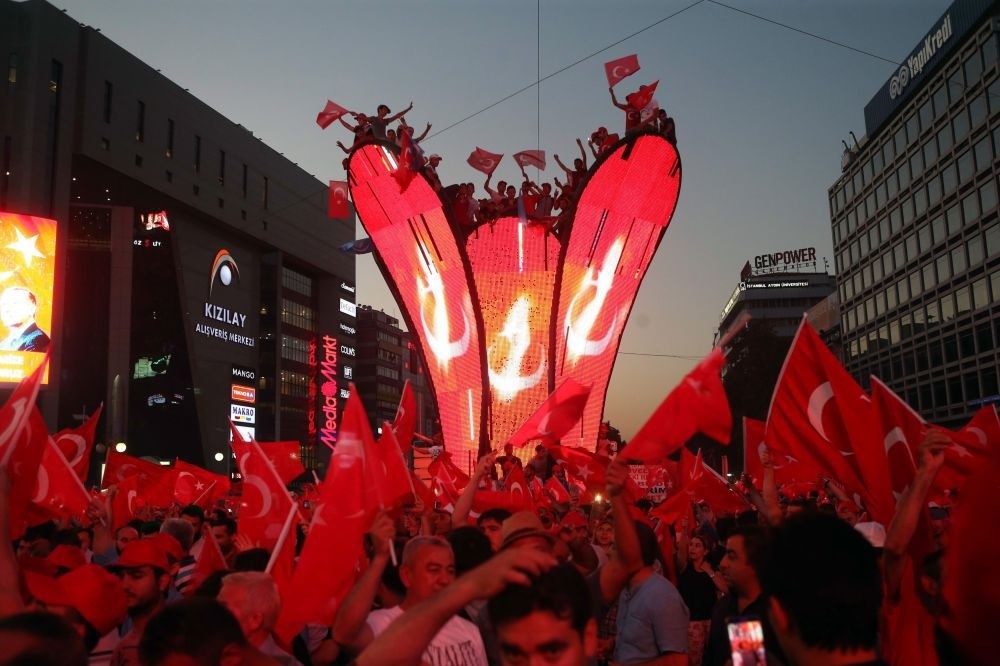 People wait for President Erdou011fan at Kizilay Square in Ankara during a demonstration in support to the government following the failed coup attempt, July 17.
by Kılıç Buğra Kanat Jul 19, 2016 12:00 am

It was a surreal moment in history, not only for Turkey, but also for the world

It was a surreal moment in history, not only for Turkey but also for the world. The Turkish people, especially the young who had never lived through a coup or junta rule, faced the threat of military intervention and experienced a short preview of a coup. When the announcement was made on a public broadcasting channel about a curfew and martial law, some even started to lose hope and express despair and hopelessness. The noise of low-flying fighter jets, the sounds of bullets from helicopters on the crowds, the bombing of Parliament and the silence and shock on the streets for a while happened in the darkest moment of the night. Foreign news channels and outlets, after the declaration of coup plotters, started to spread news that the coup had taken place and the military had taken control of the government. Some commentators on foreign TV stations even started to explain how the coup would save Turkey and the Turkish-U.S. alliance. Breaking news on some networks passed on information that "the Turkish president is seeking asylum in Germany but has been refused." People who were following social media were appalled by this ingenuity, disinformation and betrayal of democratic principles and ideas.

In the midst of the darkness, different segments of society united against the coup makers and with the help of security forces defeated them. It was the best of times when thousands of Turkish people stood in front of tanks and climbed on them to defend their democratically elected government. In Russia it was Boris Yeltsin, in China it was an unknown hero, about whom now there is an award-winning documentary. However, in Turkey it was thousands of people suddenly emerging from their homes, leaving their dinner tables and filling the streets. The fact that the coup was prevented by the people shows the maturity of Turkish democracy. For the last 15 years the political, institutional and legal infrastructure of the active civilian control of the military was achieved by the government. With the resistance and resilience of the people against the coup a new step was taken to complete the social dimension of the civilian control of the military.

One can only understand heroism and resilience after seeing the violence of the plotters from the videos uploaded to social media in the aftermath of that night. We watched how the Parliament building was bombed, the headquarters of the National Intelligence Organization was attacked and the hotel where President Rcep Tayyip Erdoğan was staying was stormed by coup soldiers. The violence and the attempted coup show one more time that Turkey has been trying to deal with a very different threat over the last few years.

The success of the coup attempt could have resulted in tragedy for Turkey and for the region. The reaction of the people to the coup showed that the coup could result in the instability of Turkey and further insecurity of the region as a whole. While there was still momentum for the coup makers, the fact that the U.S. Secretary of State John Kerry responded to a question by emphasizing stability and peace in Turkey without stressing the fact that Turkey's democratically elected government was under threat and Turkish people are facing the danger of military rule shocked everyone in Turkey. Whatever Kerry's intention, that he did not underline democracy, but instead emphasized stability, generated a major negative reaction among the people in Turkey. The statement that came after the coup attempt lost its momentum did not satisfy anybody in Turkey. Without serious damage control over the next few weeks by the U.S., this moment will be very damaging in the history of bilateral relations.