Everybody knows who killed whom 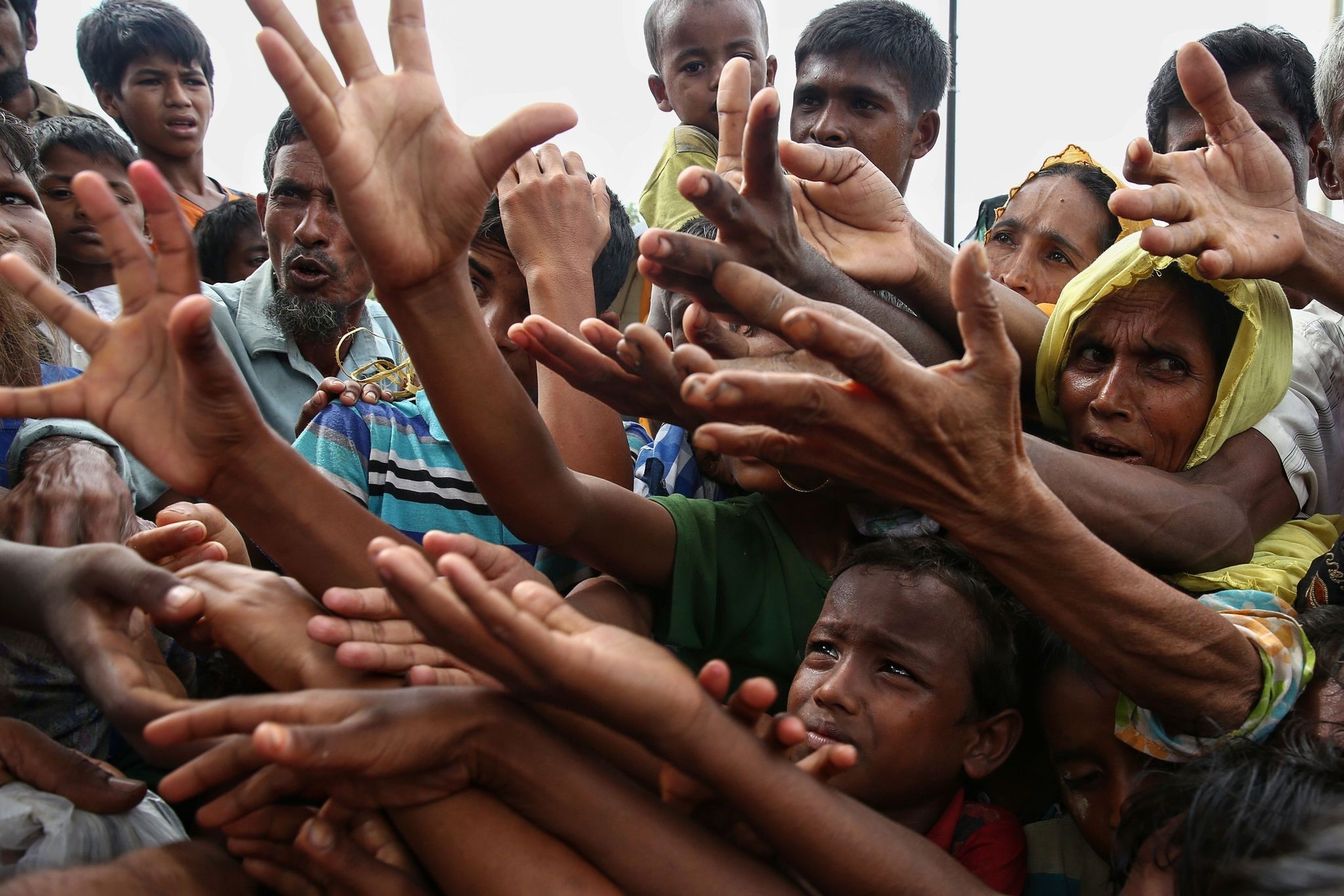 Rohingya refugees reach for food aid at the Kutupalong refugee camp in Ukhiya near the Bangladesh-Myanmar border. At least 18,500 Rohingya had crossed into Bangladesh since fighting erupted in neighboring Myanmar's Rakhine state six days earlier.
by Kılıç Buğra Kanat Sep 01, 2017 12:00 am

Once recognized as a human rights icon, Aung San Suu Kyi now rules a country that violates the most basic rights of its Rohingya minority, including the right to life

We are living in one of the most interesting times in the history of humanity. In previous periods there have been wars and conflicts that resulted in the loss of millions of people. In different times, people said "never again" in order to avoid another such atrocity. In most of these instances the international community did not realize the extent and severity of these atrocities in time. Later, they have been commemorated and remembered and became very significant for those countries' histories and those peoples' identities. As the technology improved and globalization expanded, we now have the opportunity to hear and sometimes see the atrocities that are taking place in different parts of the world.

The distant shrinking nature of globalization and the internet is bringing the information from these crisis points quicker than ever. However, as the information increases, we are increasingly becoming less sensitive to the atrocities. But the intensity and frequency of the violence always reaches a new height. And soon after, it almost becomes a routine for the international community. It is almost as if someone is trying to increase the threshold and prepare us for something worse.

For the last six years the international community has been watching the tragedy in Syria and the failure of the international system and the Western governments to stop the killing of the innocent civilians through conventional and chemical weapons. As one of the most well-documented massacres in today's world, everybody knows who killed whom and everybody knows who tolerated, helped and supported a regime like this. The Assad regime gradually increased the level of violence and upgraded the destructive effect of its weapons when it saw a similar type of insensitivity around the world. Of course these massacres in Syria encouraged and emboldened many regimes around the world to use instruments of suppression against the groups that oppose the regime's rule.

For the last week we have been seeing the pictures and videos of the persecution and mistreatment from the state of Myanmar. Rohingyan Muslims have been facing this tragedy for years now. In recent years however, the persecution has intensified and the situation for this minority has deteriorated. The written and visual documents about the atrocity of the security forces in the region is plentiful. Observers of the incidents in the region described them as genocide. What makes these incidents in the minority areas of Myanmar more tragic is that it is taking place when the head of the government in the country is a recipient of the Nobel Peace Prize and is a person who was previously persecuted and had fought against it.

Aung San Suu Kyi, who was regarded as an icon of human rights around the world and recognized together with renowned names like Nelson Mandela, today rules a country that violates the most basic rights of the Rohingyan minority, including the right to live. Not only has she failed to condemn the violence against the minority in the region, she also denied entry for the U.N. team investigating the human rights abuses in that particular region. Her attitude toward the issue ra﻿ised criticisms from former Nobel Peace Prize laureates as well. Last year in an open letter some prominent Peace Prize recipients stated the danger of "ethnic cleansing" in the region.

They wrote, "Thousands have fled to neighboring Bangladesh, only to be sent back. Some international experts have warned of the potential for genocide. It has all the hallmarks of recent past tragedies - Rwanda, Darfur, Bosnia, Kosovo." They also harshly criticized her by stating that, "Despite repeated appeals to Daw Aung San Suu Kyi, we are frustrated that she has not taken any initiative to ensure full and equal citizenship rights of the Rohingyas. Daw Suu Kyi is the leader and is the one with the primary responsibility to lead, and lead with courage, humanity and compassion." Following this letter, she has remained defiant against the criticisms directed at her. The silence of the international community to the violence in the region will only increase the threshold of the atrocities. It is another test and the actors that will take advantage in the case of the failure of this test will be those committing the atrocities today. If they are not stopped, they will gradually increase the level of violence and pave the way for another genocide.