US skepticism on crown prince's role in Khashoggi case 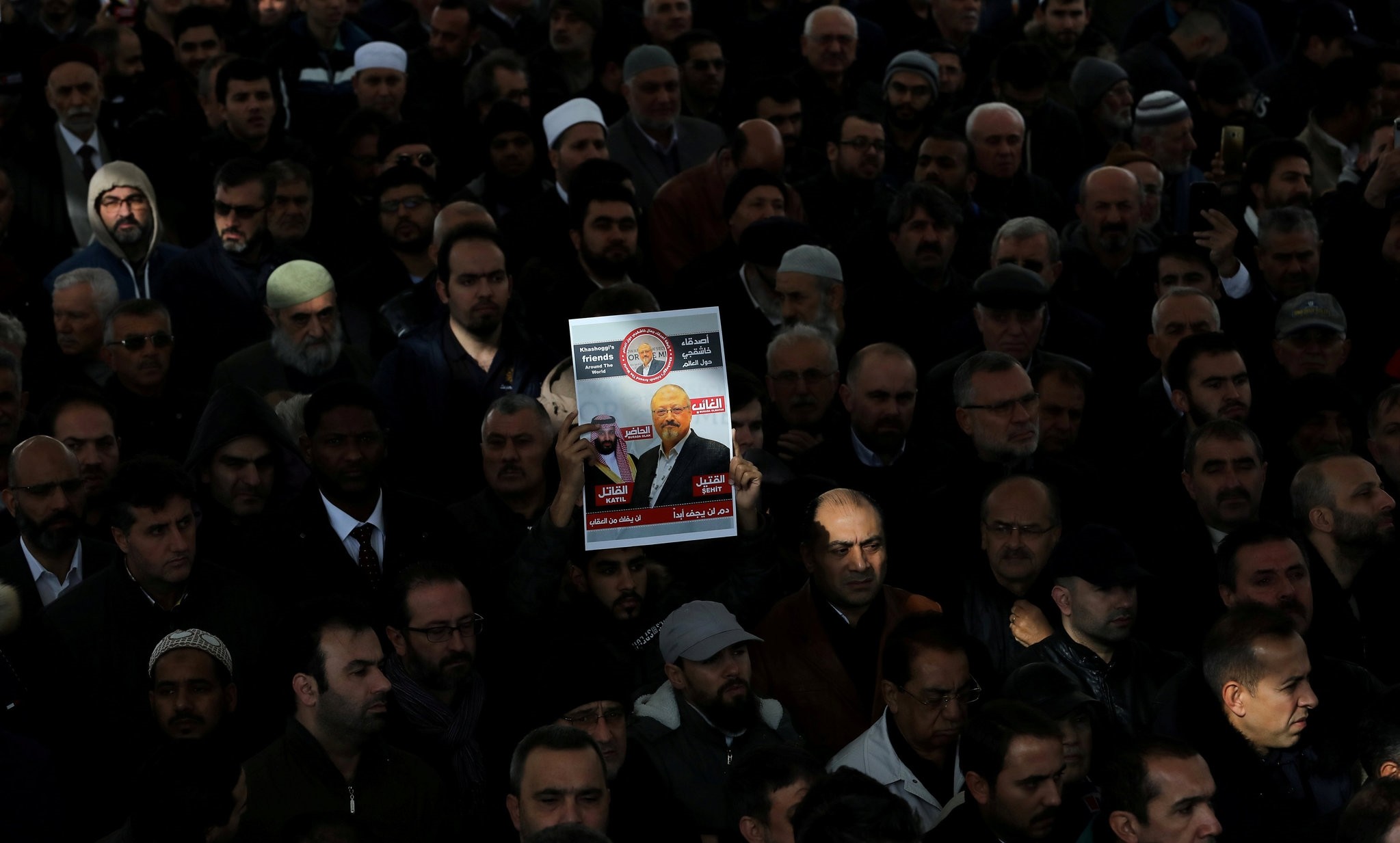 People attend a symbolic funeral prayer for Saudi journalist Jamal Khashoggi in the courtyard of Fatih Mosque in Istanbul, Nov. 16.
by Kılıç Buğra Kanat Nov 19, 2018 12:00 am

President Trump continues to express skepticism about MBS's direct involvement in the Khashoggi murder, while criticizing the inconsistent and contradictory statements from Saudi officials about the killing

Much like in the series of foreign policy crises over the past few years, this U.S. administration looks more divided and confused with Saudi journalist Jamal Khashoggi's murder.

For more than a month now the international media has covered the gruesome details of Khashoggi's execution at the Saudi Consulate in Istanbul. During this time, the Turkish authorities shared whatever information they have with the top governments and intelligence agencies around the world.

On Saudi Arabia's part, it has constantly changed its narrative – after the initial denial to a fistfight and accidental death, before finally accepting that the killing was indeed premeditated.

Two questions, however, remain unanswered at this point. The first is the whereabouts of Khashoggi's body, which was reportedly dismembered immediately after the killing. And there is little information other than this detail.

The second question is in regards to the person behind the killing. Although Saudi prosecutors have accused several men and even asked for death penalty for five of them, the international community demands to know who actually gave the order.

This question, however, has laid bare the apparent divisions between different U.S. institutions and the White House. From the very beginning of this crisis, analysts observed a serious divergence between statements coming from President Trump and reports attributed to anonymous senior intelligence officials in regards to the person who ordered this killing.

President Trump in multiple statements said that the Saudi Crown Prince Mohammed bin Salman, also known as MBS, had assured him that he was not involved. One of Trump's a tweets, for instance, claimed: "just spoke with the Crown Prince of Saudi Arabia who totally denied any knowledge of what took place in their Turkish consulate."

However, shortly after this tweet, American intelligence officials told The New York Times that they are "increasingly convinced that Crown Prince Mohammed bin Salman of Saudi Arabia is culpable in the killing of the dissident journalist Jamal Khashoggi."

Even before that a Washington Post report claimed that the U.S. intelligence had intercepted an order from MBS "to lure Washington Post columnist Jamal Khashoggi back to Saudi Arabia from his home in Virginia and then detain him."

President Trump nevertheless continued to express skepticism about MBS's direct involvement, while criticizing the inconsistent and contradictory statements from Saudi officials about the killing.

A few days ago news broke about the existence of audio tapes of intercepted phone calls between the Saudi operatives, who killed Khashoggi, and a key figure in Saudi Arabia immediately after the killing.

According to The New York Times "While the prince was not mentioned by name, American intelligence officials believe 'your boss' [mentioned in the phone call] was a reference to Crown Prince Mohammed." This assessment directly contradicts President Trump's statements that he hopes that MBS was not involved.

On Friday evening, The Washington Post reported that "the CIA has concluded that Saudi Crown Prince Mohammed bin Salman ordered the assassination of journalist Jamal Khashoggi in Istanbul last month, contradicting the Saudi government's claims that he was not involved in the killing."

This is a major development in the investigation. In the same report, a U.S. official underlined the current position in regards to MBS's involvement by saying "there is no way this happened without him being aware or involved." However, a day after this leak to the press, the U.S. State Department said that "the government had not reached a conclusion about the killing of Saudi journalist Jamal Khashoggi."

Shortly after, President Trump told journalists that "we haven't been briefed yet. The CIA will be speaking to me today… As of this moment, we were told that he did not play a role, we're gonna have to find out what they say."

However, the reports of the previous day stressed that some of the evidence in regards to MBS's involvement was given to the President but he remained skeptical.

The questions that many people are asking today are whether this report will end the inconsistencies between different institutions within the U.S. government and more importantly will it change U.S. policy towards Saudi Arabia.