Change is only possible if US takes active role 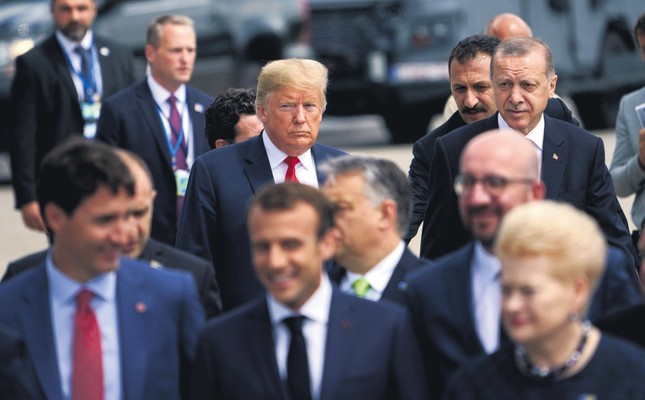 To those who have been following Turkey-U.S. relations, except for some exceptional intervals, the last two decades have been a constant journey from crisis to crisis. Some things started to fall apart with the U.S. decision to invade Iraq. The U.S. administration then failed to take into account the potential impact of public opinion on the future of bilateral ties. The same degree of indifference to the Turkish people and their impact on foreign policy took place following the "hood incident" in northern Iraq.

The damage control of such a major shock to the relations was not taken very seriously in Washington. Following the incident, the explanations that came from some members of the administration was about the timing of the incident, which was a holiday – July 4.

In the absence of a convincing explanation or active diplomacy, the incident has made a significant impact in generating negative attitudes toward U.S. foreign policy in the region. Later the situation in Iraq and perceived disregard of the U.S. administration to the security concerns of Turkey, stemming from the PKK activity in northern Iraq, further aggravated the situation.

One of the aforementioned intervals took place during the first few years of the Obama administration. In line with public opinion in many countries around the world, the Turkish public also welcomed the election of the new president. The expectation from President Obama was high due to the general deterioration of U.S. relations with allies and declining U.S. popularity in international public opinion.

However, in regards to relations with Turkey, this situation started to change with the beginning of the regime atrocities in Syria. The Turkish public one more time reacted to the U.S. foreign policy in another neighboring country. This time U.S. indecisiveness and inaction about the regime's actions generated a high level of disappointment. However, the real shock came following President Obama's decision to assist the People's Protection Units (YPG) in the fight against Daesh.

In the history of bilateral relations, this decision will be potentially one of the most consequential decisions of the U.S. administration. The impact of this decision on public opinion in Turkey was largely ignored again. Turkey was fighting against the PKK for the last 20 plus years by then and as mentioned in the previous paragraph one of the most significant issues of trust in relations emerged as a result of U.S. inaction against the PKK in Iraq.

Now it was not even inaction, it was active support to the Syrian branch of the PKK. Adding insult to injury, in bilateral relations, some U.S. officials started to actively promote YPG members in Syria. Many in Turkey thought things could not get any worse; but they were wrong.

The coup attempt in Turkey was another breaking point. Turkish people watched as the U.S. administration failed to react in a way that supports the democratically elected government in Turkey in the most critical hours of the 2016 coup attempt.

The unwillingness to use the "c" word about what was going in the country in the first White House statement was something that Turks remember from the coup in Egypt. Moreover Turkey's demands for the U.S. to hold into account those responsible for the coup attempt did not result in any action.

Almost all of the Turks knew which group was responsible for the bloody coup attempt and expected the responsible parties who are residing in the U.S. to be brought to justice. However this did not change anything on the U.S. side.

The U.S. administration continued its attitude of not taking into consideration the trauma and shock that Turkish people were going through. For Turkish people, the picture was getting clearer. A NATO ally, Turkey, had two major national security concerns. One of them was helped by the U.S. militarily and the other was hosted in the U.S.

With the beginning of the Trump administration there was another instance of high expectations from the Turkish public. They were expecting that unlike the previous two administrations the new administration will be more sensitive to the national security concerns of Turkey.

However, since then, things did not turn very favorably for the future of bilateral relations. On top of the continuation of the existing challenges in the bilateral relations, several new issues emerged. During the pastor Andrew Brunson crisis, the U.S. not only for the first time adopted sanctions against Turkey but the Turkish public also started to witness the use of extremely undiplomatic language by the U.S. side.

While the Turkish economy was experiencing difficulties, its ally the U.S. adopted trade sanctions against Turkey, knowing their potential consequences. In the meantime in U.S. courts, the Turkish public watched, in another shock, the trial of the deputy CEO of a major Turkish bank.

Now on top of all of these existing challenges we have seen the S-400 crisis in bilateral relations. While the Turkish public is watching the developments, some congressmen are introducing resolution after resolution against Turkey and some members of the administration are using that undiplomatic language yet again.

The attempts to exclude Turkey from the F-35 program and the threats of sanctioning the Turkish economy are taking place under the watchful eye of the Turkish domestic public. The Turkish public does not see any relations that will fit with the "spirit" of alliance relations.

What an ordinary Turk is now seeing is a total disregard of the U.S. for the national security concerns of Turkey and an attempt to impose its demands on Turkey whether it is for its interests or not.

After all of this, some in Washington, D.C. are looking at the public favorability ratings of the U.S. in Turkey and suggesting that Turkey is becoming too anti-American and at the public level at least shifting its axis. The cause of this situation is clear and how to fix it is even clearer. Some in Washington are trying to figure out how to resolve the crisis in relations but the resolution could not be easier. The ball is in the U.S.' court. The public in Turkey can change its perception of the U.S. only after the U.S. takes some steps to improve relations. In the absence of that, the public reaction to the U.S. will only get worse, which will have serious consequences on bilateral relations.