US must curb its loss of credibility with allies 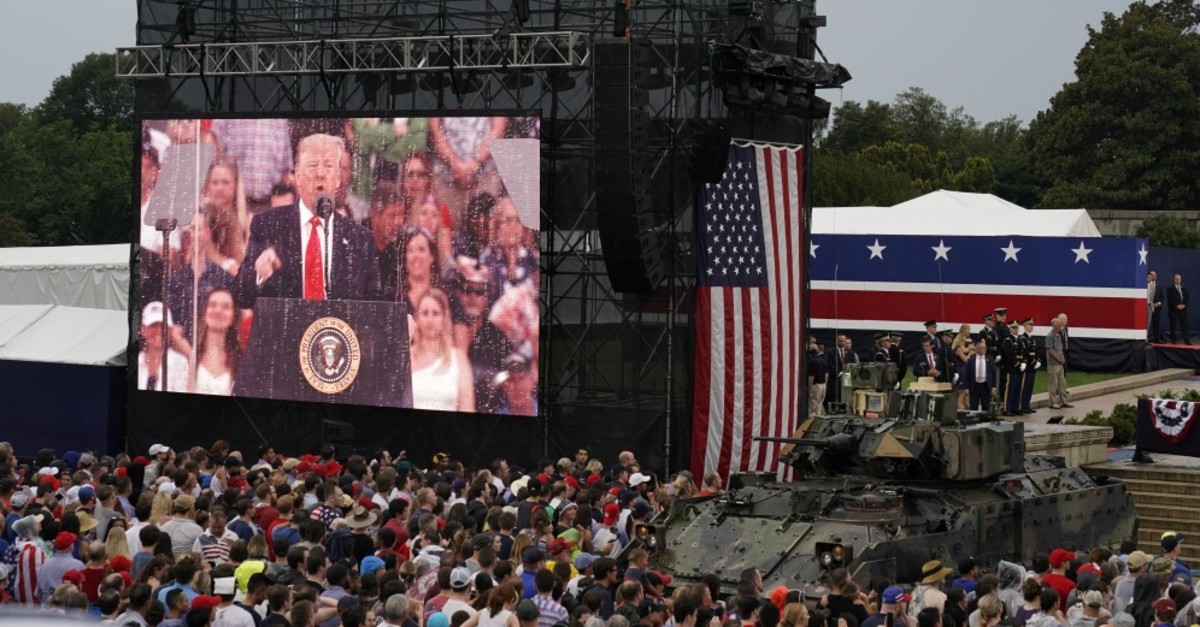 People watch on a giant screen as U.S. President Donald Trump speaks at the ,Salute to America, event at the Lincoln Memorial during Fourth of July Independence Day celebrations, Washington, July 4, 2019.
by Kılıç Buğra Kanat Jul 06, 2019 12:23 am

U.S. foreign policy makers must immediately take action to save the U.S.' image among its allies. If they fail to do so, Washington's credibility is likely to hit zero in the Middle East soon

Although it has mostly not been taken into consideration by analysts, public opinion in Turkey has been an important factor in determining foreign policy behavior of the Turkish government.

It is not something new, but it is something whose influence is consistently increasing. Even though it was neglected at the time, during the March 1 crisis when Parliament refused to allow the U.S. to launch its troops from Turkish soil, it was public opinion against the Iraq War that made some members of Parliament to cast a "yes" vote.

Since then different U.S. administrations have ignored this aspect of bilateral relations. The source of this public reaction against U.S. policies was not analyzed. After a widely circulated poll, Turkey was frequently named the most "anti-American" country but once again, it was not well understood or discussed as to what anti-Americanism really means in the context of Turkish-American relations.

Following the invasion of Iraq by the U.S., this negative attitude toward U.S. policies in the Middle East rose rapidly. Not only the unwillingness of the U.S. to deal with PKK terrorists in Iraq but also human rights violations in Iraq contributed to it.

Later there were different administrations, but this lack of sensitivity to the reaction of the Turkish public never changed. In fact, following the beginning of the Syrian civil war, the U.S. started to act directly against Turkey's national security.

The support to the Syria branch of the PKK was and has been one of the worst blunders of U.S. foreign policy toward Turkey. PKK terrorism has been something that extends beyond party lines in Turkey. A predominant majority of Turkish people considered the U.S. attitude in this issue as a major betrayal of an ally.

In the last two years, the U.S. seemingly worked hard to destroy Turkish people's trust and confidence in Washington. Constantly renewed travel advisories, threats of sanctions against Turkey and glorifying a terrorist group all generated a major reaction among the Turkish people.

A recent public opinion survey in Turkey on the perception of foreign policy issues by the Turkish people demonstrated the outcome of this series of insensitive, undiplomatic and unfriendly attitudes toward Turkey.

A poll conducted by the Center for Turkish Studies of Kadir Has University shows more than 81 percent of Turkish citizens think the U.S. poses a threat to Turkey. This showed a sharp increase from previous years.

In fact, only four years ago the number was 35 percent – though still high for a NATO ally it was nowhere near the current number. Almost 40 percent of Turkish people, according to this poll, consider the U.S. an unreliable country.

And this number is more or less similar among people with different party loyalties. Those who believe that the U.S. is a strategic ally are only around 13 percent. In another question in the poll, where the participants were asked about the most significant problems in bilateral relations, the first two responses were on terrorism.

These two issues reaffirmed the Turkish public's reaction to relations between the U.S. and the YPG. Regardless of the excuse for this, it seems the shortsighted policies of the U.S. administration generated the biggest crisis in confidence with one of the most significant countries in the region.

The poll indicated that the Turkish public does not trust the U.S. when it comes to the national security of the country at this point. The recurring threats to sanction Turkey by different actors of U.S. foreign policy at this point will only deteriorate the situation on the public level.

The frequently mentioned threats of sanctions due to the S-400 purchase and steps to implement them will make the public reaction higher. Public diplomacy projects or other programs cannot fix this loss of trust between the two countries.

It will be difficult to control the damage and mend ties on the public level. The U.S. administration needs to pay attention to this dimension of relations before taking any steps on its relations with Turkey.