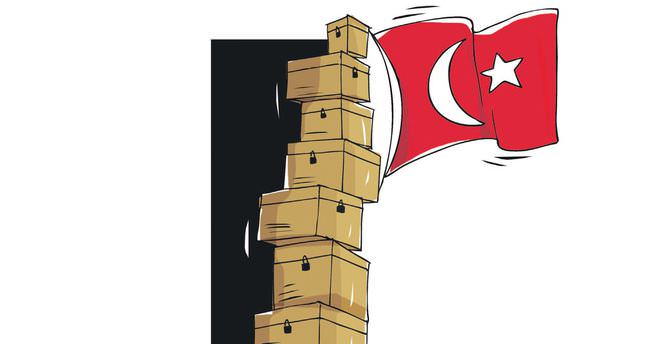 by Mahmut Övür May 29, 2014 12:00 am
On Aug. 10, Turkey will hold the second of three crucial elections as millions of voters will go to polls to pick the country's next president. The local elections on March 30 represented the first round of this prolonged struggle and the parliamentary elections, scheduled to take place on June 7, 2015, will mark the final encounter.

Ahead of the 2014 local elections in Turkey, not only various opposition parties and local players, but also a number of Western governments and observers believed that the vote would mark the demise of the ruling AK Party government. Having failed to defeat Prime Minister Recep Tayyip Erdoğan's government earlier this year, the opposition front turned to future aspirations to undermining his power. This approach has effectively generated an air of chaos in the country since the Gezi Park protests last year and it would appear that the tensions will continue until the presidential election.

During last year's urban revolts, violent mobs had attempted to seize control of the prime minister's offices in Dolmabahçe, Istanbul in order to strongarm the government to resign. When Erdoğan left the country for a series of official visits in North Africa, which had been organized months in advance, widespread rumors that he would never come back from Tunisia gave rise to rampant political pipedreams in the opposition's ranks.

Just as the country slowly patched the wounds of street violence, the Gülen Movement orchestrated an attempt to overthrow the Erdoğan government on Dec. 17, 2013 under the guise of a corruption investigation. As a political move, the corruption charges sought to discredit the AK Party government, which was now the target of an opposition front consisting of Istanbul-based big business interests, various political parties and the Gülenists, a so-called religious community. Never in the country's history had an elected government faced such a serious challenge. The campaign, admittedly seeking to remove Erdoğan from power while keeping the AK Party intact, went to great lengths in order to make the case against the prime minister, including, of course, that he would escape the country before the local elections.

The government, however, managed to survive yet another challenge to its rule as Erdoğan ran an ambitious election campaign throughout the country and, to the surprise of many pro-opposition figures, won another landslide victory on March 30. As such, Erdoğan won the first round against the opposition. Despite the local election victory's importance to the ruling AK Party, there is no doubt that the genuinely historic vote will take place in August 2014.

Across the world, presidential elections take place according to the particular arrangements of each country, typically a direct vote by the people or an indirect election through the legislative assembly. In Turkey, however, the presidential vote has a long history of creating problems which date back to the 1960 military coup that rearranged government institutions and positioned the presidency as a safety valve in case elected governments sought to move away from the policies of the secularist establishment. It was therefore that the office of the president has long been reserved for either former members of the military or senior-level bureaucrats, people who could fulfill the function of keeping civilians under control. It was not until three decades after the 1960 military coup that a civilian, Turgut Özal, held the office.

The Era of Civilian Presidents

In 1989, the Turkish Parliament broke a seemingly incontrovertible rule about the presidency when Turgut Özal, who had served as prime minister since 1983, made a successful bid for the presidential office, where he would die just four years into his seven-year term. His successors, Süleyman Demirel and Ahmet Necdet Sezer, largely served at the pleasure of a handful of military commanders and senior bureaucrats even though both presidents notably lacked military background. During the lead-up to the 2007 presidential election, the first after the AK Party's rise to power in the early 2000s, a number of controversial events shook the nation. In February 2006, an armed teenager assassinated Italian national Andrea Santoro, a Roman Catholic priest, claiming he had killed the missionary in the name of Allah. Three months later, a gunman attacked the Council of State headquarters to kill a judge and injure four others. The seemingly religiously-motivated attacks continued with the assassination of Armenian-Turkish journalist Hrant Dink in January 2007. Finally, later in the year, five men tortured and murdered three employees of Zirve Publishing House in Malatya. The Ergenekon trials, which gained momentum in the late 2000s, partly concentrated on these assaults.

As the targeting of non-Muslim communities by supposedly religious Muslim assailants failed to deter the AK Party government, Ret. Gen. Yaşar Büyükanıt, who served as Chief of the General Staff of the Turkish Armed Forces at the time, issued a memorandum on April 27, 2007 to highlight the military's constitutional mandate to protect the Republic. In response, the government took a strong stance against the military's direct involvement in the controversy.

The military's inability to force the AK Party government into submission gave rise to another challenge from the establishment. The old guard within the judiciary ruled, following an appeal from the main opposition Republican People's Party (CHP), that two-thirds of the parliamentarians, namely 367 lawmakers, had to be present in order for the legislative assembly to have a quorum to hold a presidential vote. Unsurprisingly, the courts had not required a qualified majority when presidents Özal, Demirel and Sezer ran for president. When the courts forced the Parliament and, by extension, the presidential election into a deadlock, the AK Party government called for early elections on June 12, 2007 and won an impressive 47 percent of the vote. Following the parliamentary elections, the ruling AK Party joined forces with the Nationalist Movement Party (MHP) to elect then-Foreign Minister Abdullah Gül as the country's 11th president. Several months later, a referendum introduced several amendments to the 1982 Constitution including a new rule stipulating that the people would elect the president through a direct vote.

The upcoming presidential vote thus marks an unprecedented event in the Republic's 91-year history as millions of voters will go to polls to elect the country's next president, marking the second round in the struggle between the ruling AK Party and the opposition front. While the former campaign will pledge to eliminate all impediments on the "popular will," opposition parties will seek to seize this final opportunity to keep the Kemalist order intact. Since the people have the ultimate choice between the two roadmaps, Turkey is entering perhaps the most crucial election season in its modern history. With the presidential vote just months away, the ruling AK Party enjoys a comfortable advantage over the opposition.

With the official announcement still pending, Erdoğan seems to be the front-runner for the job. Even if Erdoğan decides not to run the party has a wide variety of potential contenders in its ranks including President Abdullah Gül. Furthermore, the AK Party presents the electorate, 45.5 percent of whom recently voted for the party, with a political agenda willing to tackle pressing issues such as the Kurdish question and rapprochement with Armenian authorities. Considering the party's track record in economic development, social policies and democratization, the AK Party candidate will no doubt get a head start in the race.

The Opposition: Is a Unity Candidate possible?

The opposition ranks, in contrast, fester with trouble. Keeping in mind that the most recent local elections marked yet another defeat for the main opposition CHP, the ruling AK Party's main competition seems largely isolated to a handful of secularist strongholds and unable to reach out to new voter blocs. Although the party revisited some of its outdated positions on a variety of issues including the social status of religious Muslims and the Kurds, the local election results clearly established that the outreach attempts proved futile. Unable to appeal to these key constituencies, the CHP campaign barely has a fighting chance in the race. With its prolonged search for a viable presidential increasingly resembling a wild goose chase, the CHP leadership conveys the message that it has not given any serious thought to the issue over the past seven years.

The situation also looks bleak for the MHP, whose lack of preparation, coupled with an extremely nationalist platform which stands in stark contrast with the party's professed ideal to find an all-encompassing candidate, has motivated the organization to run a joint presidential campaign with the CHP leadership. Currently, MHP chairman Devlet Bahçeli appears to be leading efforts with CHP leader Kemal Kılıçdaroğlu pledging his support as both parties meet with pro-opposition NGOs and fringe parties to pitch the idea.

According to Bahçeli, the ideal presidential candidate should be "a nationalist, a conservative with spiritual values, a secularist with democratic values, an individual at peace with the Republic's core values." Luckily, Kılıçdaroğlu's list of preferred traits describes roughly the same type of candidate. The million dollar question now is whether such a candidate even exists, and more important, whether there would be any need for political parties if the opposition's ideal candidate embodied such a perfect combination of different political creeds. To be perfectly honest, it is hard to believe that such seasoned politicians like Bahçeli and Kılıçdaroğlu are unaware of this fundamental problem. The only reasonable way out of this conundrum is for each political party to participate in the presidential race individually.

How about the Kurdish vote?

At this point, the Kurdish political movement and its popular base holds the key to the upcoming presidential vote. Recently, the Peace and Democracy Party merged with the Peoples' Democratic Party (HDP) as part of a broader agenda to improve the movement's electoral performance among Turkish voters. The HDP leadership has already announced that they will opt to participate in the presidential contest individually. It remains unclear how this bold move might influence AK Party Kurdish voters. In the 2010 constitutional referendum, the Kurdish political movement had called for a boycott to reduce turnout but inevitably failed to influence the outcome. While the movement received about 7 percent of the vote in past elections, the Kurdish peace process as well as the widely-acknowledged fact that the HDP campaign is doomed to fail might limit the party's popular appeal. The Kurdish political movement will also have to consider that a large portion of the Kurdish population travels to various parts of the country as seasonal laborers.

In light of that, Turkey appears to be entering a particularly interesting election to vote in what AK Party supporters hope is a head of state with considerable political power. Given how much is at stake, certain groups within the opposition will understandably seek to influence the outcome by calling for street protests and mass demonstrations. Meanwhile, the AK Party government is rekindling ties with big business interests at home and joining forces with foreign partners as Kurdish oil begins to flow, negotiations in Cyprus promise reconciliation and bilateral relations with Israel and the U.S. go back to normal. The political arena not infrequently throws curveballs to its occupants, but the situation at hand promises to spoil the opposition's game plan.
Last Update: Oct 17, 2014 9:10 pm
RELATED TOPICS