Clinton or Trump: Who is better for Turkey? 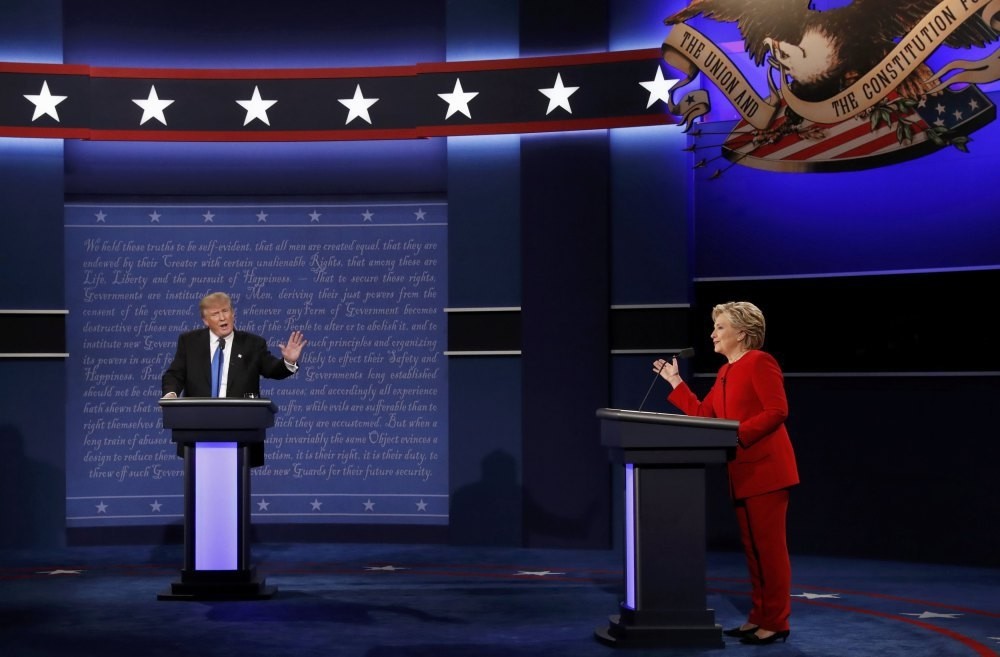 Donald Trump and Hillary Clinton discuss a point during their first presidential debate at Hofstra University in Hempstead, New York, Sept. 26, 2016.
by Mahmut Övür Oct 06, 2016 12:00 am

This is the first time a U.S. presidential election has been of such critical and historic importance to Turkey due to the intensification of bilateral relations

The U.S. presidential race is continuing at full speed. Although opinion polls have revealed that Democratic presidential nominee Hillary Clinton is forging ahead, her Republican opponent Donald Trump has a chance - which in no way can be considered slight - to potentially bringingsurprising election results. Those following the political race within the U.S. believe that Clinton is using the same old rhetoric, in surprising contrast to her campaign for change and her professed democratic views. Clinton has assumed the role of protector of the status quo, failing to bring innovative ideas to the political roundtable aside from her existence as the sole female candidate.

As for Trump, he frightens the public with racist rhetoric aimed at Syrian refugees, Muslims and Mexicans under the guise of making the U.S. "great again," attracting widespread attention by penetrating the status quo like a bolt of lightning.

It is quite likely that Trump could mobilize the "unexpected" voters and attract votes from the fragments of society who protest the status quo. In any case, the global community is following the U.S. presidential race more closely - and warily - than U.S. nationals themselves, knowing that a slight tipping of U.S. political scales could result in the spillage of sorrow and chaos in other parts of the world.

It is no secret that presidential leaders represent a wide range of interests, political ideology and strengths - all of which have been the subject of intense debate regarding U.S.-Turkish relations. This was most clearly seen in New York at the 71st Regular Session of the U.N. General Assembly where we witnessed firsthand the polarized views of Turkish nationals regarding the U.S. presidential candidates.

The question, "Which candidate is better for Turkey?" is a dividing line for most Turks, as Clinton has rallied the support of Turkish Americans and Trump being the favorite in Turkey. The support Clinton has garnered from Turks living in the U.S. is primarily propelled by the Gülenist Terror Group (FETÖ) presence in that country as well as her approach to the Justice and Development Party (AK Party) and the Republican People's Party (CHP). Clinton's ties to FETÖ are not limited to financial support alone, as FETÖ penetrates Clinton's politics deeply. This is quite certainly a source of anxiety not only for AK Party supporters but anyone who currently lives in Turkey. The number of Trump sympathizers in Turkey is on the rise, attributable to Trump's remarks about Turkish President Recep Tayyip Erdoğan and his provocative claims that Central Intelligence Agency (CIA) agents were in Turkey on the night of the coup attempt.

Still, these are not the only criterion used to asses Clinton and Trump. The main criteria regards their perspectives on foreign policy. The idea that Clinton cannot extend herself beyond the role of female representative of U.S. politics and supporter of the geopolitical formation of micro-state-lets in Syria - and other countries - while the U.S. continues its geopolitical efforts to implement its "controlled chaos" policy in geostrategic regions around the world. Despite making remarks which are both racist and exclusive, Trump says that he will focus on existing states and emphasize world peace as the Republican candidate - in stark contrast with the former spearheading policies of the Republican Party that resulted in the Iraq invasion and ensuing chaos in foreign relations in the past. Trump is being likened to former U.S. President Ronald Reagan by powerful U.S. domestic policymakers who hint at a possible new "Reagan era." In short, Trump has clearly stated that he will pursue a policy under which the U.S. will no longer disintegrate established states in foreign countries - in contrast with conservatives who supported the invasion of Iraq and intervention in the civil war in Libya. It remains to be seen if Trump will successfully implement such fundamental political changes; however, the mere utterance of these words captured the eyes and ears of the international audience. A good number of politicians and businessmen in Turkey support Trump rather than Clinton in what is a critical, historic election for Turkey as bilateral relations become increasingly tense. Looking at the whole picture, which candidate do you think is better for Turkey and the international community?
Last Update: Oct 06, 2016 1:41 am
RELATED TOPICS