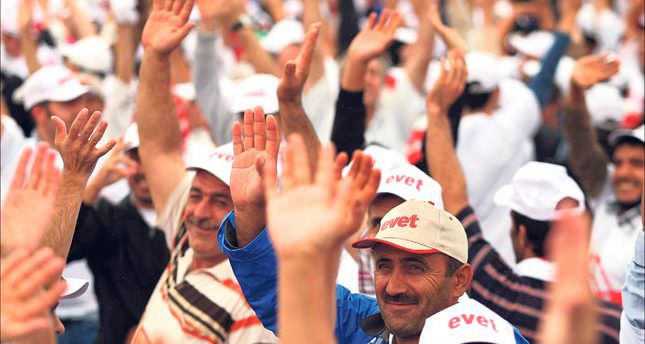 The Western lifestyle is perceived by many to be an object of reliance. However, the actual circumstances in Turkey can be quite different

In the past 12 years, Turkey has spiraled into a very important and fundamental change. The world system, which was initiated with Sykes-Picot and revised at Camp David, now draws reactions from the public, and thus forces change upon itself. Turkey, on the other hand, was an underdeveloped country, struggling with its own internal issues within a completely undeserved passivity. Imagine a country, in which ninety percent of the population was sidelined because they were non-Muslims, Kurds, Alevi or religious, and ruled by a chosen executive elite that rules as they see fit. It is truly difficult to believe, but Turkey, being a country with a large, dynamic population and a multi-cultural empire in its backland, kept skidding for eighty years on an unworthy level. It is this abnormal situation that has begun to change the past 12 years.

The totalitarian, oppressive and bureaucratic state apparatus was transformed with reforms after the election of AK Party on Nov. 3, 2002. The AK Party emerged as the only carrying, political party for this change. The broad, disadvantaged groups wanted better, freer, more humane lives. They leaped at any opportunity, elected populist leaders such as [Adnan] Menderes and [Turgut] Özal, but each time, the requests and initiatives for change were rebuffed by the Kemalist elite guardianship, with coups, secret interventions, assassinations and provocations.

However, the AK Party succeeded by blending the renewal process it found itself in after its National Vision experience and after the Feb. 28 postmodern coup, and by relying on the wind of globalization. By undercutting the system of "people belonging to the state" and "laws for the elite," they aimed to institutionalize the concepts of the government belonging to the people, and equal rule of law.

There have undoubtedly been times of errors, slowness and management deficiencies in this process. However, they succeeded being the only party able to consolidate the people in their hopes of change, and are still the only party in Turkey making politics for the people and the future. For 12 years, there has been, and still is, a silent revolution. Status quo components, with their periodic change of alignments, tried to resist this change. They tried to prevent it, first by being in the tow of the military and the court, then by developing different strategies.

This in and of itself is not a problem. The problem has been their refusal to desist political interferences while doing this. There has been no end to their putsch, memorandums and media and capital supported perception operations. This has turned the lack of a libertarian- interchanging opposition, which Turkey needs the most, into a chronic problem.

The Gezi crisis and the Dec. 17 operation have been the last chains of the never-changing pattern. Turkey is once again preparing for the elections on March 30, 2014, with extraordinary, un-political interferences and a high tension.

It is quite difficult for the West to understand what is going on in Turkey. The AK Party is a religious but democratic-reformist party that has challenged the Western Islamophobic perception. The merging of these two concepts has resulted in confusion in the West.
The media that broadcast Turkey to the West and the [nongovernmental organizations] are in the exclusive possession of the status quo.
Thus, Western journalists, politicians, NGOs are informed unilaterally by segments with a political agenda, who are in an internal battle with the government. This information is then passed through their own media outlets to their own public.

Daily Sabah is implicating a crucial first in breaking this monopoly, and in providing an objective reflection of what is going on in Turkey. Gaining an accurate understanding of Turkey is central to the West because Turkey, due to its geographical fate, is a vital bridge that will bridge the East and West. The AK Party stands as an elusive partner to the West with its interpretation of secularism as libertarian, and by being friends with the West and a movement towards radicals.

I sincerely believe that Daily Sabah will fill this void with all its worth. I am delighted to have joined this family, and wish it all the best in its future publishing career.