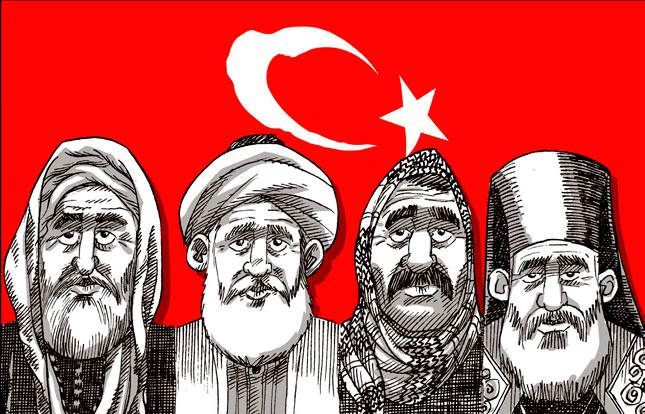 Whatever their background, though, people simply wanted to lead an honorable and free life with a reasonable amount of respect. Even if they had but stale bread to eat, we yearned for a life without discrimination based on identity, belief or race

Unfortunately, I did not come up with the great title above. I borrowed it from a panel discussion organized by the Young Civilians and the Political Vision movement, two of Turkey's leading NGOs, back in October 2007. The aforementioned event featured representatives from the country's "others" whose civil rights, property and even lives fell prey to exclusivist founding principles of the state.

As such, the speakers gave new life to the eternal memories of some of the Republic's unsung heroes: Former Prime Minister Adnan Menderes who was overthrown and executed by the military junta; poet Nazım Hikmet who died in exile; Ugur Kaymaz, who perished from a police bullet; the recently-assassinated journalist Hrant Dink as well as Aziz Nesin and Ahmed Arif; Erdal Eren, a minor executed following the 1980 coup; religious figures like Atıf Hoca of Iskilip who was sentenced to death by revolutionary courts...

Personally, my case was slightly different. I was asked to talk about a non-Muslim with grievances to the state. Hrant Dink, a sympathetic figure whose loss we all mourned, had to be discussed as an entirely separate case.

When I asked whether I had to pick someone famous, the organizers told me I could go with anyone. Thus I offered to talk about my father, whose suffering I knew personally and through different sources - an idea that, at the time, seemed perfect.

I had, however, been completely unaware of the emotional challenges of speaking about him in public. After all, my father's life was a story that brought tears to my eyes even when I was only listening to it. Telling the story was an entirely different level. When the muchdreaded moment came, I unwillingly walked to the stage.

On Sept. 6, 1955, my dad ran to his cramped shoe store that effectively represented all he had in life. When mobs began to target Greek, Armenian and Jewish stores on Istiklal Avenue and eventually rushed down the hill toward Dolapdere along with a number of vandals who were apparently too late for the initial strike, my father ran to his shop, grabbed a knife and began to wait for the attackers.

Whenever I asked him why he would do such a thing, he would say that he had no choice but to defend the establishment that marked, in his words, a thin line between survival and death for his family. At the time, my uncle and neighbors attempted to persuade my father to give up on his store and save his life to no avail.

Eager as he was to stand guard of his shop, my father was clearly scared to death as the mob slowly progressed toward the shoe store, shattering glass and targeting storefronts as they moved. As he motionlessly stood before his establishment, other shopkeepers stared at him in utter surprise as they tried to take cover.

Thus the mob slowly moved toward the shoe store with roars and stones, as my father made eye contact with a few of the people directing the vandals. They must have thought that he was completely out of his mind! They may have thought that the store was so small anyway that it would not be worth the fight - or seen determination to survive in my father's eyes. Either way, they shook their heads, attacked the neighboring Parasko, a Greek meze joint, and moved on. My father, recalling the day, would always tell me that he stood guard in front of his shop until dawn the next day. «That day drained life out of me,» he would often say.

I am aware how grotesque my father's story might sound to many readers, as did a lot of people who were at the event as I shed tears over what he went through. What is still more grotesque, however, is that everyone including religious Muslims, Kurds, Alevis, Circassians, leftists, non-Muslims, Romani people and women had to face similar situations as eight decades went by full of similar stories, extortion and unresolved murders.

For eight decades, however, the state made sure that we did not get what we wanted. Ethnic nationalism, a repressive Jacobin-style secularism and the security state worked to exclude the vast majority of the people from government and treated them as a threat. A limited group of elites ruled over the country's politics, bureaucracy and economy as elected governments unfit for such an arrangement were forcibly removed from power to make way for the junta law. Over the years, the judiciary and the military, among others, evolved into ideological weaponry to ensure that the post-coup government would have no real power to govern the country. Civilian governments received the establishment›s blessing so long as they kept the people in their payroll and provided essential services without interfering in actual policy-making.

Understandably enough, this little game benefited none but the tiny minority it was designed to serve. Turkey's shadow state presented the people with imaginary threats to cling onto power: While fear of religious extremism worked to repress devout Muslims, the mass paranoia of an independent Kurdish state facilitated a massive crackdown against the sizeable ethnic group. Similarly, the state manipulated ethnic nationalism to target non-Muslims and citizens of various other ethnic backgrounds.

A series of traumatic events such as what happened in September 1955 took place against the backdrop of covert state activities as the people ended up assuming responsibility for pillage and plunder. In the absence of intercommunal coexistence dating back several centuries, without a doubt Turkey would have ended up in a bloody civil war. Luckily enough, losses and wrongdoings failed to lead society to the point of no return.

Today, Turkey celebrates the Kurdish peace process that the government announced on Jan. 3, 2013. In over a year, none of the country's young people perished in meaningless and completely preventable armed conflict as parents do not have to bury their children.

Similarly, many Turkish women reclaim their right to education and political representation after decades of unjust obstructions. As the state finally begins to return property that it unjustly expropriated from non-Muslim communities, it provides an opportunity to its exiled former citizens of Greek origin to come back to their homeland. As abandoned churches and historic artifacts come back to life, the state apologizes for the mistreatment and massacre of Dersim's Alevi population under the Republican People's Party. The wind of democratization and human dignity blow with such efforts.

Interestingly enough, Prime Minister Recep Tayyip Erdogan and his party face charges of dictatorship against the backdrop of such historic developments, as a series of operations against the government over the past few months seek to impose a grand design on the political process. Since the initiation of disarmament talks with the PKK leadership, the country has often found itself on the brink of chaos.

There is no doubt that the government has had its fair share of shortcomings and misguided policies during its 12-year tenure. We must, however, acknowledge that the aforementioned attempts to derail the country often represent extra-parliamentary efforts while we push for progress through political and civic means. Due to a lack of much-needed parliamentary opposition, Turkey finds itself tangled in unlawful political designs.

As a critically significant country between the East and West, Turkey and its AK Party government continue to represent an invaluable partner for Western counterparts seeking to bolster their relations with Muslim societies in the east. The country serves as a role model not only for the Middle East but also for aggrieved societies across the globe in their struggles for identity and self-confidence -a path that can only nurture peace and stability.

With the "Realpolitik" of the past century rapidly becoming obsolete, Turkey represents an opportunity to the West in its attempts for a viable alternative for the future.

No government or institution is -nor should be- exempt from criticism. We must, however, criticize in a fair fashion and refrain from pursuing goals irrelevant to improvement under the guise of critique. As the country continues its efforts to establish a fully functional democracy and cleanse itself from its troubled past, all genuine contribution will continue to be appreciated. Yet there is need to understand Turkey in an accurate manner and to approach it with the due respect that a great country such as this deserves.

Turkey and the West continue to function within the terms of mutual need today as they did in past years. In light of this fact, all parties involved would be better served if we approach the country more responsibly and more frankly.