Pushing the limits of distortion until Erdoğan is immobilized 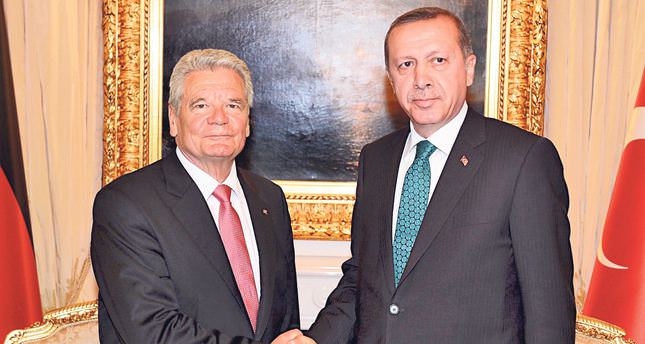 Had Turkey not democratized or developed economically compared to 12 years ago, the coup, which was conducted with the help of the autonomous structure within the judiciary and the media, would have attained its objective

Unilateral statements by Germany's President Joachim Gauck during his official visit to Turkey last week sparked debate but it did not lead to confusion. Gauck's statement was reminiscent of that of Hasim Kılıç, President of the Constitutional Court (AYM) on the anniversary of the court's establishment. Both statements, which were not taken seriously or appreciated by the majority of the public, were results of the same mentality. Some of Gauck's statement reflected reality while others not so much.

This was a choice concerning how he would like to view Turkey, a phenomenon which we as Turkish people encounter constantly.
Interestingly enough, the arguments that were put forward by the president of the Constitutional Court and Germany's president completely matched up with the arguments by those in the Dec. 17 alliance and who are in a continuous power struggle with the AK Party.
Beyond any doubt, some criticisms were rightful.

Otherwise, nobody would have taken it seriously. Freedom of the press, reappointments and reshuffling in the judiciary and the police department in response to the Gülen Movement and Dec. 17 operation, bans on Twitter and YouTube, legislation on the Supreme Board of Judges and Prosecutors (HSYK), the National Intelligence Organization (MIT) and the Internet were being evaluated based only on these sections' argument.

Following Erdogan's outrageous response, Gauck made a statement that amounted to "Nongovernmental organizations from which I obtained information misdirected me." As for the president of the AYM, he kept bashfully silent. Even he was in a state of confusion due to his own statement.

Criticism is something and taking sides in Turkey's harsh power struggle is something else. Nevertheless, let us give a brief summary for those who want to sincerely understand Turkey.

What we are experiencing today is not a political dispute but rather a power struggle. We are not yet a society, but rather large and small communities that live in their own ghettos with their counterparts for 80 years. Turkey is not a state of law and the judiciary is neither independent nor impartial. The media is not a sector that offers objective information and news, it is rather a proponent of the totalitarian power. As for its opponent, the pro-government media, it tries to withstand this struggle amateurishly most of the time. In the past, there was no secularism in Turkey at all. What we call secularism was an umbrella of power under which elites came together. It was also a bat to make religionists submissive, or at least a bat which was intentionally created to keep them away from the public sphere. The nationalism was another name for unionist marginalization and its ultimate task was to remove Anatolian patriotism. The racist unionism firstly eliminated the heterogeneous Anatolian identity.

What you call the national economy was an outcome of the Kemalist mentality that gained its first funding through confiscation of the minorities' properties. It flourished by taking opportunities away from the public and accumulating them in Istanbul on behalf of the state. Parties, labor unions, academia , bar associations, NGOs and even terrorist organizations were institutions that were established to camouflage one-party rule in the name of offering diversity.

Claiming as if these all were not the case, it is impossible to understand last 12-year's striving. Surely, this is known by superior maestros, because distorting reality is only possible by having the perfect knowledge of reality.

I feel certain that Gauck and the media outlets that stood behind him, know very well what we are experiencing today is not a political challenge but a power struggle. It can be assumed that any Western country with an average mind can evaluate the periods before and after the March 30 local elections from a more balanced perspective, by taking into consideration claims made by various parties. Actually, it should be noted that the dilemma of "being able to or unable to express yourself to the West" is an aspect of the power struggle that is related to Turkey and rest of the world. What ensues from this point of view is not the understanding of "whatever we do, it ends in smoke" but a must to run this struggle in a more conscious and decisive way.

Most of the time, expressing oneself well requires having power, means of expression and a proper addressee.

While campaigning for power you cannot expect the other party to understand you well and share their opportunities with you. This ends up with unnecessary intimidation and confusion.

The 12-year period under Prime Minister Recep Tayyip Erdogan has seen a will to transfer sovereignty to the public. If we had gone through the same popular insurrection 300 years ago, people would take to the streets with their guns. Our age is more civilized in appearance.

What has changed today is not the characteristics of war but rather the weapons used in it. Today's battlefield is media. Sometimes an article which is published in an influential Western newspaper can produce the effect of several memoranda for the whole of country.
This is a reality which cannot be disregarded easily.

Had Turkey not democratized or developed economically when compared to 12 years ago, the coup, which was conducted with contributions by the autonomous structure within the judiciary and the media, would have attained its objective. This would have gone down in history as a democracy epic that narrates the toppling down of a "dictator" with the help of the West.

I do not think this has been realized. We have a presidential election ahead of us and some are pretending not to know truth as they do not want to see Erdogan become president.

In short, these sorts of maneuvers are immediately unveiled in the society and create more determination among them.