'One in, one out' is just a nice game name 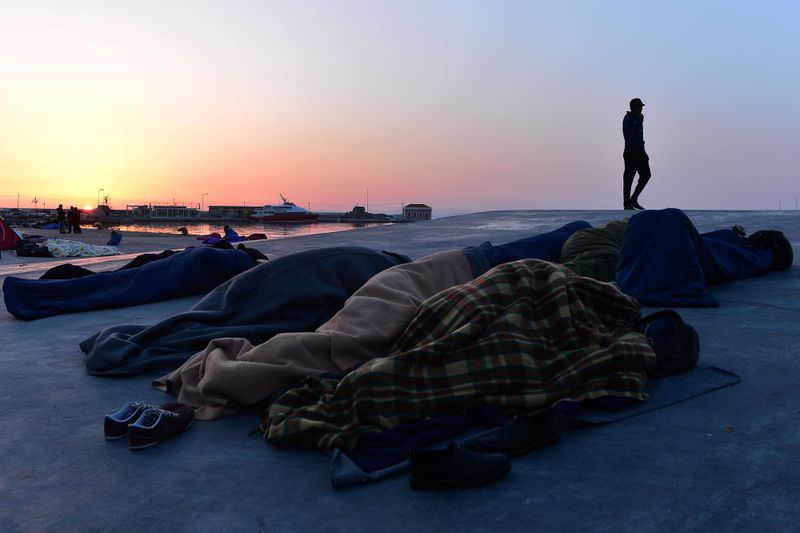 People sleeping in the port of Chios, where refugees and migrants who managed to leave the VIAL detention center a few days ago are camping out.
by Melih Altınok Apr 07, 2016 12:00 am

Due to its over 900-kilometer border with Syria, Turkey is the biggest victim of the wave of refugees that flows from that country because of its ongoing civil war. Turkey has been hosting nearly 3 million Syrians in its territory for many years. In addition to spending billions of dollars on refugees, the government has to shoulder the socio-economic challenges that refugees bring. When the matter becomes a topical issue, the attitude from EU countries that are the main destination for refugees becomes a subject of criticism for good reason, because so far European politicians have preached human rights at official meetings and conferences, but then have not walked the talk. Last year they realized that they could no longer avoid the crisis with this all-too-familiar attitude, as migration and the terror that stems from this dynamism started pushing at Europe's door. Finally, the EU reached an agreement with Turkey after months of negotiations.

The revised agreement between the EU and Turkey is based on a "one in, one out" formula. Although the formula's name is reminiscent of childhood games, it is serious, as it stipulates that one Syrian living in Turkey's refugee camps will be settled in Europe for each Syrian sent back from Greece, and that non-Syrians will never be allowed to enter Europe. What will Turkey receive in return? According to the agreement, the EU will accelerate efforts to allow visa-free travel for Turkish nationals to the Schengen area and will pay some portion of the promised 3.3 billion euros in aid in October. Such great altruism Europe: Have a heart. The bloc's population exceeds 500 million, and EU per capita income is nearly $30,000 in countries where there are just several thousand refugees. Official figures, however, reveal that a total of 2.7 million Syrians live in Turkey where the population is 80 million, and the per capita income is around $10,000. The actual number of Syrians in Turkey is even higher. The same applies to Lebanon, which hosts 1.3 million refugees, and other Middle Eastern countries. I leave it to you to bear these figures in mind and estimate the minimum number of refugees that the EU must take in. Forget international law and justice, how can the agreement be implemented and what it will serve?

Let's suppose that you have convinced Turkey. How will you force desperate Syrian mothers and fathers who run the risk of death by going to sea with their babies in winter to abide by this agreement? How can you guarantee the integration of refugees if you only take those who are healthy and qualified for good jobs like European colonialists that only picked slaves with healthy teeth? Have you forgotten that the terrorists who attacked Paris and Brussels were European citizens? Can you not see that border agreements remain irrelevant, as borders have become vulnerable and terrorism has become global?

The EU must stop deceiving itself, its prospective member Turkey and the desperate refugees. We all know that this agreement cannot save the day let alone bring structural solutions to the refugee crisis. Thus, the EU must fairly share the burden of Turkey and countries like Greece that shoulder the major of responsibility despite being poorer than the EU average, and must make political moves despite the U.S. and Russia to establish a safe zone in Syria to stop the waves of fleeing refugees in the short run and to aim for Syria's Bashar Assad's exit, as he is the root cause of the problem, in the long run.
Last Update: Apr 07, 2016 1:51 am
RELATED TOPICS