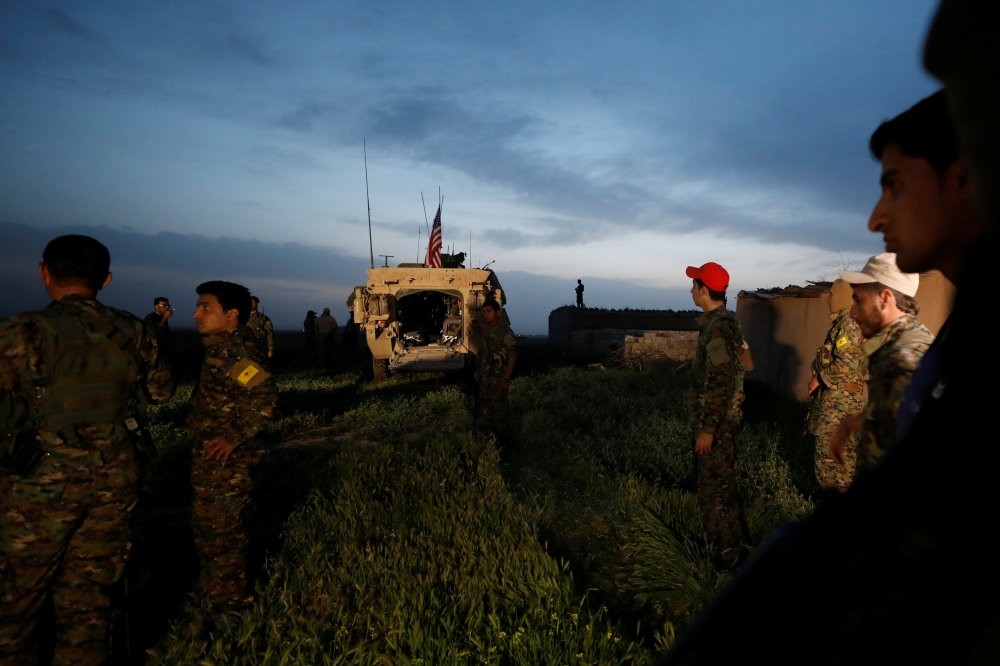 Kurdish YPG terrorists standing near a U.S military vehicle in the Syrian town of Darbasiya next to the Turkish border, April 28.
by Melih Altınok May 11, 2017 12:00 am

Trump's decision to arm PKK/YPG terrorists, which was one of Obama's biggest mistakes, will only cause Turkey-U.S. relations to falter

President Recep Tayyip Erdoğan's U.S. visit, which is scheduled for next week, is crucial for Washington as well as Ankara. The economic and political route Turkey will pursue in the following period is of vital importance with regard to the U.S. presence in the Middle East, which is currently the focal point of the world.

The U.S. cannot possibly achieve any success by placing Turkey on the periphery in the face of agents such as Russia, Iran and Israel, who endeavor to create prerogative spaces in the Mediterranean and the region. Nonetheless, the U.S. President Donald Trump, who came to power with the promise of building a new Middle East policy and abandoning Obama's failed policies, has engaged in some confusing steps since his inauguration.

Prior to the Raqqa operation, the U.S. president approved providing weapons aid to the People's Protection Units (YPG), which is the Syrian-based Democratic Union Party's (PYD) armed wing. As is already known, and as a top U.S. commander has mistakenly let slip, the YPG is the Syrian offshoot of the outlawed PKK, which is responsible for thousands of civilian deaths in Turkey.

The PYD, the YPG and the PKK share the same leadership, same ammunition and same bases. Consequently, the plan approved by Trump is nothing but a strategic and tactical mistake against Turkey, a NATO ally hosting Washington's military bases. Since the Pentagon, which managed to convince the president about the seriousness of the issue, is aware of the legitimacy of the reactions, Pentagon spokeswoman Dana White said the following words on Tuesday:

"We are keenly aware of the security concerns of our coalition partner Turkey. We want to reassure the people and government of Turkey that the U.S. is committed to preventing additional security risks and protecting our NATO ally," This statement by the Pentagon, which points out that the YPG is the only military force that could recapture Raqqa from Daesh, affirms the fact that Washington has yielded to secular versions of the radical militants who organized the 9/11 attacks. It undermines the prestige of the U.S. for it to vouch for terrorists while guaranteeing that the weapons given to the PKK and the YPG will not be used against Turkey.

But how can the new president insist on maintaining Obama's policies when he repeatedly declared that these policies were mistaken? Is he obeying the U.S. deep state and the global powers that loom over Washington, although he could courageously articulate their names while taking the presidential seat? Does he aim to consolidate his power by distracting the attention of the circles that harshly responded to his presidency and could not accept his election victory? Or, is he deterred by the messages and threats made with nuclear alarms?

The Turkish public has given unprecedented support to a U.S. president with the election of Trump and is seeking answers to these questions, which are expected to come to the agenda during Erdoğan's meetings towards the end of May. Hopefully, this crucial mistake that offends and perturbs Turks, who lost thousands of citizens to the PKK and the YPG terror, will be corrected. We are hopeful about that. The president cannot overlook the fact that the trivial acquisitions the U.S. might gain by supporting a group of secularist terrorists cannot be compared with losing the support and trust of a significant ally like Turkey.

The person we are referring to is a smart politician who could take over the U.S. presidential seat with his sharp wit with neither media nor capital support. Or did we make a big deal out of it? Were a couple of radicals correct when arguing that the U.S. cannot change, esteemed president?
Last Update: May 11, 2017 1:12 am
RELATED TOPICS