Whether secular or traditional, hegemonic masculinity still exists in societies 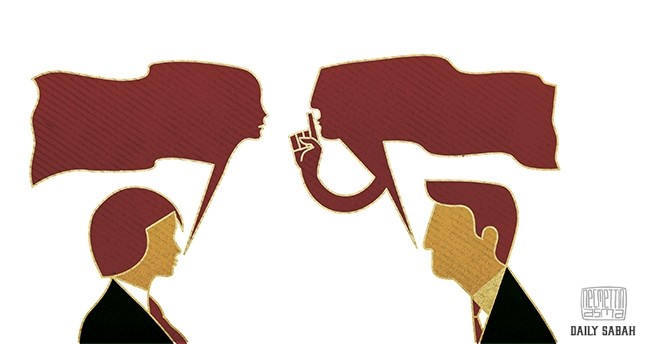 Hegemonic masculinity continues to remain a chronic dogma within societies regardless of being secular or traditional. Thus studies have a lot to overcome

When we say gender studies, we mean studies on the issues of women, men and LGBTQ. Gender studies, however, everywhere around the world, are mostly understood as studies specifically focused on women.

So why is this the case? One reason is because of the huge desire and ambition of women researchers and academics who have the intention to pursue understandings of womanhood, femininity and motherhood and who want to challenge the established societal values imposed on women. Another reason maybe is that women in many places are mostly encouraged to work on women's issues. So gender studies' focus on women has become a boundless area of research and has branched out into many fields, becoming complicated and thriving in interdisciplinary studies.

When we talk of equality and justice between men and women in gender studies, we should not only talk about one side of it, as there is a reciprocal relationship between the sexes, and we cannot understand women's studies without also focusing on masculinity.

Feminist studies have somehow evolved and merged into identity and identity politics. As Judith Butler criticized gender identity politics, when being a women turned into an identity of its own and a legitimate tool in the political sphere, becoming very popular, normative and formative identities of women in a certain period of time and place are built that are simultaneously descriptive, binding and exclusionary of "others." This has been the biggest challenge in feminist theory.

As a matter of fact, masculinity studies were very late to the game and, as a part of gender studies, only started to bear its first fruit in the 1990s. Capitalism, militarism, nationalism, traditionalism and neoliberalism were reevaluated with a perspective of the "personal is political" and masculinity studies found out that men hold the dominant position in gender relations as the real pragmatic users, beneficiaries or hegemons of any established order in various societies and contexts whether it be patriarchal society or post-modern business sectors, and even academia, politics and anywhere else you can imagine.

But one thing soon emerged from this holistic perspective on men. Is every man hegemonic? Are all of them beneficiaries and/or dominant exploiters? Masculinity studies clearly put on the table that many men in various societies are suffering, that they are real victims of the high standards held over men and are affected by the inter-masculine hierarchy and hegemonic masculinity.

Because concepts of masculinity are also something given and shaped by a society, with all its ingredients it is something more than only roles, it is something like a performance that women can perform as well, and it is a sort of teaching that can be posited in different levels.

HOW TO DESCRIBE MASCULINITY IN SOCIETIES AS THE REAL ISSUE

Now, the problem is how we can define masculinity in different regions and at different levels when the near universal terms of feminism, emancipation and empowerment are useless.

Feminist theory started as a universal theory on the oppression and challenges women have faced, and throughout time it created an advanced understanding of the plurality of identities and also accepted that different types of feminism are possible. This has been one of the outcomes of the 25- to 30-year discussion on feminism, considering historical and cultural diversity between individuals and the recognition of the other while refraining from a determinist description.

This evolution of feminist studies occurred through confrontations with the large production of literature.

Without a similarly large production of literature, masculinity studies took advantage of this ripened discussion and focused on the problems of its definition in terms of cultural relativity and claimed that as feminist theory created a universalist understanding of womanhood, it excluded many other identities and, more importantly, restricted the scope of the discussions. Masculinity studies mostly lean on the denial of creating a universal definition of masculinity without a reciprocal discussion and field analysis. Studies claim that masculinity can only be shaped and performed based on culture and historical understanding, thus a single definition of masculinity is not possible, as we can only place masculinity within various forms of feminism and understandings of modernity and masculinity. However, R. W. Connell's definition of hegemonic masculinity says that it is built in every society according to its own context in order to ensure the hegemony of men over women and LGBTQs, which in turn established a gender order. This order may have a different aspect at school, within the family, in the military and at an office, but it always, nonetheless, has a hegemonic character. The concept of masculinities as an irrevocable hegemony, however, is a matter of level and not a matter of kind within the concept of culturally competing and culturally different masculinities.

The challenge here is to decipher intertwined understandings of cultural relativity of masculinity and the hegemonic character of the gender order.

The hegemonic character of the gender order is of course not free from the historical or political social order or tradition of all hitherto existing societies, and is at the same time not diffusible for every individual in a specific cultural context.

Having said this, I want to focus on the generally accepted cultural aspects of hegemonic masculinity in Turkey. We may roughly talk about two types of masculinity. The first, of course, is the usual suspect of the patriarchal model. This has, however, made remarkable progress and has undergone some change. Now it requires a fresh model of analysis to understand the codes of the patriarchal system especially after women's agency became visible during the July 15 coup attempt.

The second type of masculinity in Turkey is the uncontested secular hegemonic model of men. What kind of a man is he? With an excellent wholeness of body, in Foucauldian terms, a nearly perfect human body, not disabled or with any defect, he is middle aged, mostly married with children, who has respect for basic traditions like going to mosque during Eid or being the figurehead and protector of the family in a very traditional sense. He has a specific distance to cultural piety, graduated from university, has a white-collar job and earns a good income. This is the model of the modern, Turkish, secular male imposed on society, which creates hegemony over other men and women. While this hegemonic traditional-patriarchal model has always been the usual suspect, it was rarely mentioned as part of the modern male standards imposed on masculinity. This secular, hegemonic masculinity very much relates to different levels of descriptive and oppressive categories like rural vs. urban, rich vs. poor, educated vs. illiterate and center vs. periphery among men.

MASCULINITY AND WOMEN'S ROLE AFTER THE AK PARTY ERA

Since 2000, women's agency in Turkey has been challenged, with a new setting of distinct political subjectivity, women who are not part of the previously established secular elite who became visible not as alternatives, but as the real game changers in society.

Because of the power of the image, it was easy to observe any change concerning women, but it has rarely been analyzed in Turkey on behalf of any change regarding men or masculinity. Religious men also detached from their previous gender order settings and challenged both the traditional or secular impositions on men. For example, in the last 15 years, the Justice and Development Party (AK Party) has done away with military tutelage over politics, which means that the military, as one of the most important institutions in the country in terms of defining secular masculinity, has dramatically lost credit. The masculine domination by Turkish militarism diminished and the number of the conscientious objectors increased. This has all happened in a country where performing one's obligated military service is seen as the second step of manhood after circumcision.

Mainstream media was a backbone, producer and reproducer of this understanding of secular masculinity in Turkey, but it has now opened up to new depictions of masculinity, as examples of rural men have become visible in TV series, which have also become very popular in the Arab world, although they are still very hegemonic.

Now we clearly see Muslim men's agency has multiplied along with concepts of Muslim masculinity, although it has continued to maintain its hegemonic character.

Turning back to the starting point, masculinity studies have questioned a unique and universal acceptance of hegemonic masculinity and opened space for cultural diversity within a specific context, yet it has still left open the question of the settings of hegemonic gender order.