It's a girl! International Women's Day 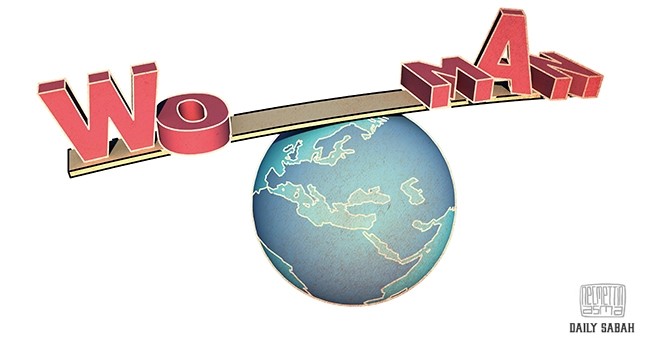 Gender walls are still prevalent today, with evolved traditional barriers continuing to affect women in all facets of life

When parents and their closest relatives first hear the sentence, "It's a girl," their response differs tremendously depending on the societal expectations from the baby girl. For some cultures a baby girl is a blessing, while for others, it is a lifelong cause of anxiety, a misfortune for the family. Irrespective of the traits attributed to the baby girl, the identity of women in their respective societies swings like a pendulum over her future.

This identity is actually a reflection of what changes the society needs to undergo. There remains considerable distance in the progress needed for women to reach their deserving place in societies in terms of political identity, participation in social life and equal access to opportunities. This means that when a baby girl is born, she carries a huge burden and needs to fight and overcome all kinds of gender walls throughout her life, regardless of her social background. The kind of society or the context may change, but the wall remains as one travels from east to west or from modern democratic societies toward more traditional ones.

These gender walls also differ depending on the environment and include lack of education, access to clean water or food, war, violence, sexual abuse, wage discrimination, body size discrimination, impossible standards of beauty, challenges faced in family and child care.

There are thousands of articles, studies, movies and books about how societies impede women from advancing by limiting their access to resources and opportunities, which should be seen mainly as technical problems. Issues such as hunger, birth rate, education et cetera, are more linked to problems of political economy rather than a matter of gender issues and necessitate long-term strategic planning through the presence of political will and international cooperation to produce a comprehensive solution.

GENDER ATTACKS NOT OVER IN MODERN TIMES

On International Women's Day, there are still serious problems faced by women in the developed societies of the so-called First World. One of the oft repeated fallacies in the developed world is to restrict women's issues within the bounds of technical problems and being satisfied with progress just because women are now earning a living, allowed to travel alone, receive education and make personal choices as "liberated women." Feminism has attacked traditional values as the source of all the factors that force women into submission and through its struggle for suffrage, the re-making of social structures in work life, education and within the family altered our lives forever.

I would neither deny nor object to the effect of feminism on breaking traditional society's submissive structure, which made womanhood a synonym for motherhood and wifehood, rendering her invisible in the rest of a functioning society.

However, without crafting an adequate answer and formulating a methodology for women in different societies, feminism created a mode of action that was translated into a "constant attack" to the detriment of resolving many of the most intractable problems.

Perceiving the patriarchal society or the tradition as the sole cause of the gender wall was a perspective that spread from Europe to rest to the world in the late 1950s through striking European literature that described a thoroughly indigenous European experience.

Only in the 1990s did feminist literature realize that feminism was not a one-size-fits-all term, and that there was not a single understanding of feminist theory. The original feminist perspective unquestionably arose from a struggle against tradition. However, the top-down, west to east, liberated to unliberated formulation of the modernization theory left out the effects of cultural diversity, reproduction rights, family structures.

The concepts of industry vs. family, modernity vs. tradition, work life vs. child care distracted most Western societies from the family structure, which has resulted in today's Western state-sponsored programs to subsidize families, increase the birth rate to prevent a demographic decline.

Attacking tradition or patriarchy for the sake of modernity to such an extent risked putting nothing tangible in their place. A reinterpretation of the established values rather than destroying them is a topic that has been openly discussed by women from different societies in the last decade. Excluding the role of religion, or Christianity in the European case, created a level of discontent among female activists, which recently rejected the exemplification of a homogeneous secular female agency.

Tradition was, yes, a means to impose submission, a historically inferior status for women, forcing obedience, but it was also the means to present the accumulation of centuries-long human experience and allowed the continuity of family through generations and greased the wheels of the functioning of society.

Tradition is also not a set of absolute rules but a constantly changing reflection of societies. Due to its depiction as frozen in time immemorial in the modernism debate, tradition failed to adapt to the times as it had in the past and never had the chance to convert itself based on the needs of women in modern society. The resulting destruction of the traditional society, with its inherent checks and balances, left women even more vulnerable and created a new set of problems in our societies.

Unfortunately, modern societies and the Western understanding of feminism created female agency not free from gender walls and distances. Family remains a gender wall for women, along with a myriad of burdens produced by modernity.

Married women with children in most modern societies face extreme difficulties, not due to strict working hours, but because they are also burdened with the duties of the family. The glass ceiling is a term of discrimination not produced by tradition but is purely an outcome of modern perspective imposed on women that they have to be presentable, young and fashionable, but at the very same time, they should not pursue a top career.

Women, when forced to conform to "ideal" body-size measurements and anti-aging standards, enter a vicious circle that extort their well-earned money, which could be used for themselves and their family, just to become accepted as proper members of society. If they refuse to conform, they are destined to be isolated and valueless.

It is obvious that with or without tradition, women continue to suffer. They are forced to manage an impossible array of responsibilities by balancing a family, career, education and their lives. From the conservative perspective, the family is a prerequisite for everything, but many times, it fails to produce the necessary answers to the problems mentioned above. Modern societies, as exemplified by their treatment of women, are producing modern traditions to suppress and impose a new set of rules that make women's lives much more difficult. Still, many questions linger: How will a mother raise her child with an ongoing professional life and social appearance while men still have little roles for the family? And how will women confront the ludicrous standards imposed by the capitalist modern society?