2017 full of Western indifference to Muslims 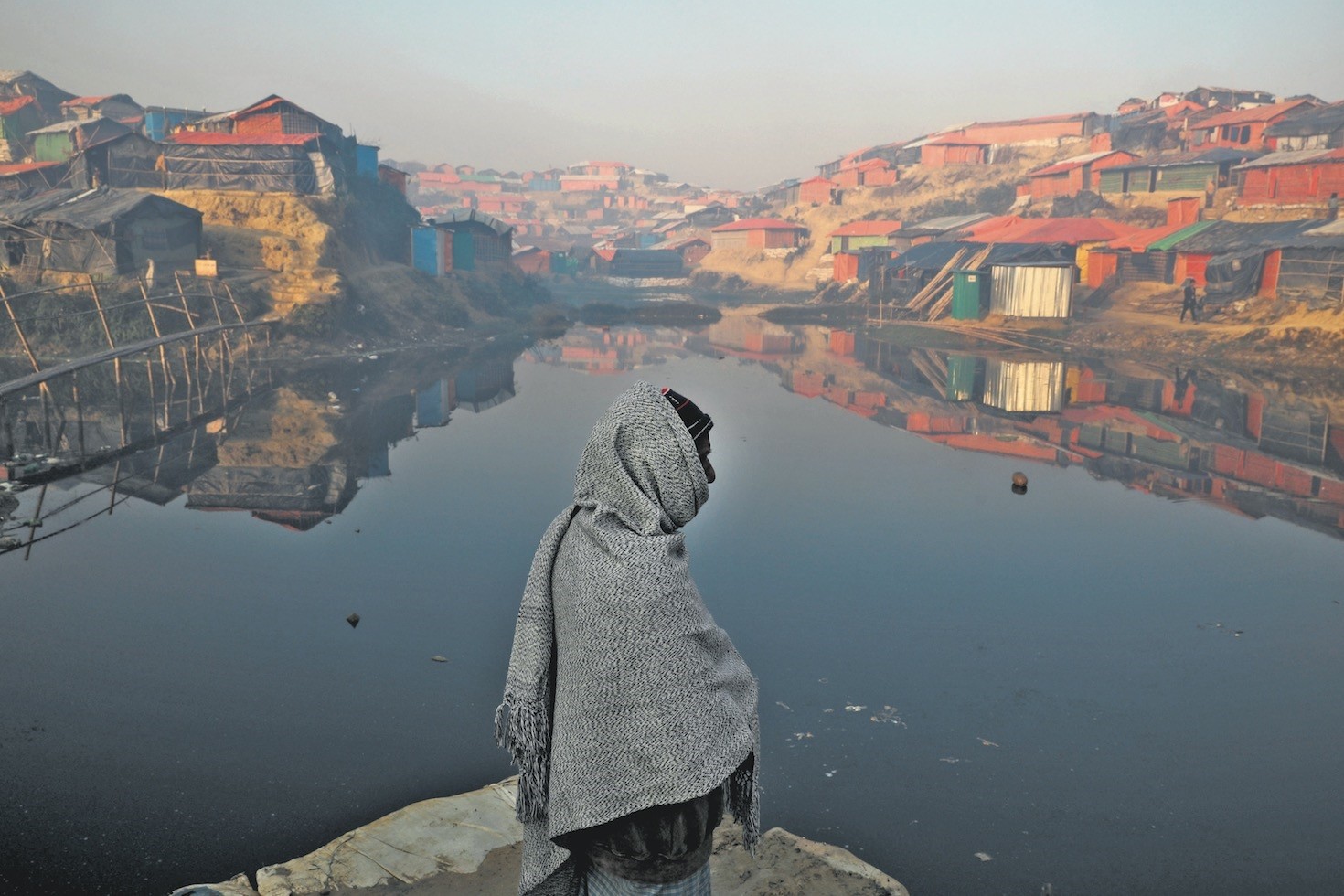 A Rohingya refugee stands next to a pond early in the morning at the Balukhali refugee camp, Cox's Bazar, Bangladesh, Dec. 26.
by Meryem Ilayda Atlas Jan 01, 2018 12:00 am

The international system as we know it is pushing all of us toward an apocalyptic future. It is insane to allow things to advance as they had in 2017. The grand narrative of "civilization" is no more. Injustice and cruelty are spreading all around, with a lack of tangible resistance to this devolution deafening. The year 2017 will be seen by the future generations as one of the years when the world became a worse place.

Terror attacks, nuclear threats, civil wars, proxy wars, forced migration and ethnic clashes were aggravated by the irresponsibility of leading powers. The retreat of a dominant power may be seen by some as an encouraging development. However, narrow priorities of states and ever-growing domestic problems suffered by many countries have produced a chaotic environment where limited understanding of conflicts is preventing the formulation of comprehensive solutions to our problems. The world has never been this indifferent to suffering since the Bosnian Wars. Even worse, nowadays, it is usually the victims who are blamed.

Aime Cesaire, in his "Discourses on Colonialism," says: "A civilization that chooses to close its eyes to its most crucial problems is a stricken civilization. A civilization that uses its principles for trickery and deceit is a dying civilization." A more perfect analogy for today's Europe cannot be made. As millions of Syrian refugees flooded into Europe, the EU adopted a siege mentality rather than mobilizing its resources to help fellow human beings. How long can Europe preserve its prosperity and peace when its neighbors are facing the biggest disasters in centuries?

What is unique in this day and age is that the leading powers not only work to resolve the world's problems but rather compound them with their irresponsibility. People and their leaders need to resist recklessness for the good of humanity. President Recep Tayyip Erdoğan's leadership in mobilizing the opposition to U.S. President Donald Trump's controversial decision to recognize Jerusalem as Israel's capital and the U.N. General Assembly's decision to condemn the American move was one of the few actions that redeem trust in our common humanity.

Palestinians have demonstrated the fact that their minds remain immune to colonization despite the world order collapsing around them. They are the guardians of the long Islamic history of Jerusalem and eventually history will trump "interests."

Some interests also will be written adversely to the West. Being indifferent to what is happening in Myanmar, Syria, coups in Venezuela and Zimbabwe, only supporting the civil groups and democratic initiates when necessary, shortly being hypocritical to all people living in the "risk societies."

Drawing red lines for your own country, concerns only about your own security, observe only "your democracy" makes it impossible to speak up for a universal ethic.

After the Paris attacks, all the world leaders poured into Paris. They stand and united together. These attacks and all terror attacks wherever they happen in the world should be condemned at the highest level and at every opportunity. Including the Charlie Hebdo attack, even though I do not find any value to mock with the sacred values of Muslims, a group already suppressed and disadvantageous in French society, yes, indeed, we are all very sorry. We feel the proximity and intensity of the threat and the feeling of loss because we have the same here. However, we are still far away to develop a comprehensive understanding for terror, still arming proxy groups in the field to a region that exports terror all over the world.

We Muslims are expected to turn the other cheek every time we are attacked. European Muslims continue to be on the firing line of hypocrisy. In 2016, 1,500 Islamophobic attacks happened in Germany. That number fell to 718 last year, which is cheered and welcomed as progress. Still, each and every one of these hundreds of attacks is a symbol of bigotry, prejudice and racism's victory over humanity and decency.

No European country is immune to Islamophobic actions. Meanwhile, Muslims are put in a very difficult position to find evidence from Islamic jurisprudence that Islam is not genuinely and essentially violent. We journalists and academics are being asked about the same stereotypical questions everywhere and every time when we visit Europe.

Questions are about the incompatibility of Islam and democracy, about violence, financing of terror, et cetera. We are being tasked with proving ourselves innocent of these charges. I personally view such interrogations as invasive. They are examples of hidden fascism, an attempt at nullifying their complicity in Islamophobia. Intellectuals are, or at least should be, capable of determining what is good and bad in their own societies. At least, that is what intellectual honesty demands from us. When there is a lack of honesty, nihilistic ideologies take over. These nihilistic ideologies, like those followed by the Nazis and Daesh militants, are naturally violent and normalize the mistreatment of the other, whoever they may be.

Today, we apologize for slavery, apartheid, Hiroshima, colonialism in Africa, and the genocide of Aborigines. For these apologies to be perceived as sincere, we should demonstrate our intention not to repeat them ever again. And this can only happen if we truly take action to resolve the many catastrophes occurring all around us.

Every passing minute is an opportunity to say, "O.K., I am not responsible for these tragedies in the Middle East, Yemen, Syria and Iraq, but at least I feel the responsibility to alleviate their suffering. I need to understand and help. I shouldn't turn my back on the needy. Denial and rejection is tacit acceptance of these crimes."

Tens of millions of refugees around the world are the community most susceptible to violation and abuse. Whole generations and cultures are drowning in the Mediterranean Sea.

As Ulrich Beck says, we are building walls because we think building walls is cheap but dialogue is costly and uncomfortable. That is why we are now turning into "risk societies," seeing the other as a threat and less wise.

There is nothing more costly to humanity than building walls between countries and cultures. Borders are necessary only to mark a capacity, not for humanity.