History will judge the perpetrators of Gaza massacre and their accomplices 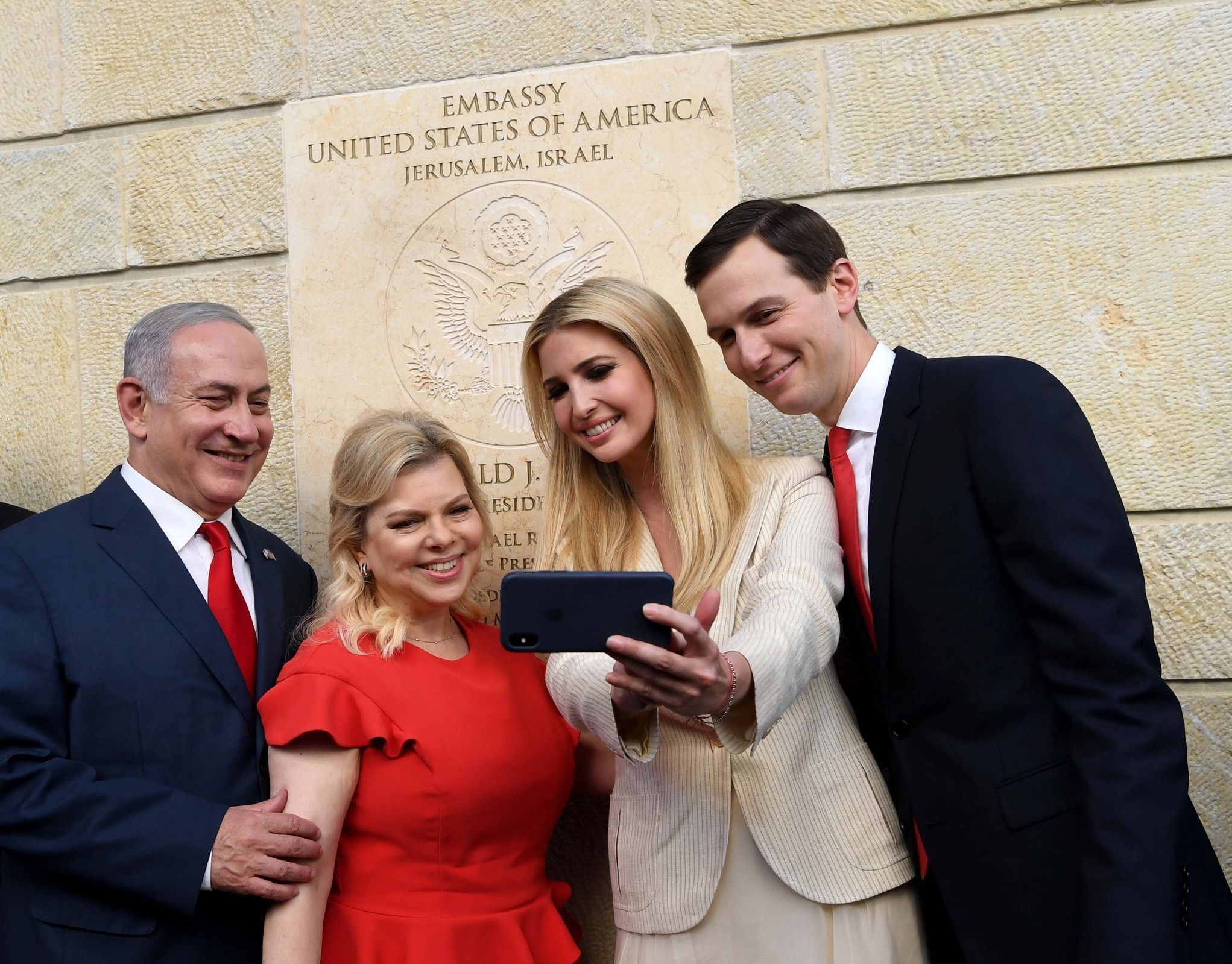 Israeli Prime Minister Benjamin Netanyahu with his wife Sara and the daughter and the son-in-law of the U.S. president, Ivanka Trump and Jared Kushner, take a selfie during the opening of the U.S. Embassy in Jerusalem.
by Meryem Ilayda Atlas May 17, 2018 12:00 am

The silent complicity of Arab leaders in this week's massacre, along with American and Israeli aggression, will be remembered by future generations

On one side, there are Israelis and Americans – wildly overjoyed, they sing songs and celebrate. On the other side, there are Palestinians – being targeted with bombs and bullets. For a whole day, the entire world witnessed this ruthless act of disregard.

On the same date, Ivanka Trump went down in history with her fancy clothes, amid elaborate rituals at the dedication ceremony of the U.S. Embassy in Jerusalem – just as 62 people were killed and thousands wounded on the anniversary of the Nakba.This isn't the first time in history, nor will it be the last, when oppression has taken place in the world. And it is not just taking place in Jerusalem either. Ever since the world came into existence, there have been the oppressed and the oppressors, who killed and massacred innocent people without even leaving their corpses in peace.

As a matter of fact, Jerusalem has witnessed plunder, fire and the death of its residents on many occasions. But, at no point did history record looters and destroyers. They were only remembered as troublemakers, spreaders of disorder and murderers. Their names were forgotten. Regardless of their allegiance, they were frowned upon by all religions and cultures.

This is how it worked thousands of years ago as people gave birth to legends, recited poems and passed their knowledge orally. But history has always made a careful distinction between people that promoted order and the rest. This was the case even back in the day when there was no technology or written records.

Today, the situation is quite different. Ever since the first U.S. invasion of Iraq in 1990, everything has happened on live television. In 2014, the bombing of Gaza was broadcast live to the world. So was the killing of 61 Palestinians and the elegant reception at the new U.S. Embassy in Jerusalem. Everything is on record.The U.S. and Israel spectacle deeply hurt millions of people. America is a serious threat against world peace. But we have full confidence in history. Those who have created the situation today, for certain interests and those who turned a blind eye to what is happening, will be judged by history and by the collective memory of people around the world.Of course, history won't just tell the tale of Israel and the U.S. dancing on the dead bodies of innocent people. It will also record the lack of reaction from the Arab and Muslim world. Emboldened by U.S. President Donald Trump, Israel just conquered Jerusalem. Al-Quds is gone and the Arab countries appear to have made their peace with this move.Today, the Arab world is in a worse condition than ever before. The Palestinians are weak and the Palestinian Liberation Organization weaker. President Mahmoud Abbas does not want to take a strong position. With his position in danger and his approval rating at an all-time low, he finds himself in a difficult predicament. Recent surveys indicate that 70 percent of Palestinians want Abbas to resign. This kind of internal division further weakens their position.

Israel successfully disconnected the West Bank from Gaza and Jerusalem. Now, there is a perception that Gaza, the West Bank and Jerusalem are three distinct entities rather than parts of a single entity. At the same time, Europe and the U.S. continue to provide financial assistance to President Abbas to breathe new life into his administration. For them, the most important question is Israel's security. Although Palestinians see the security cooperation as the biggest problem, Abbas is unwilling to stop.

Although Arab governments are not necessarily weak, they are certainly uninterested in the Palestinian issue. They are not in a position to make decisions. They are part and parcel of the aggression against Gaza and Jerusalem.

Arab leaders are completely lost within the so-called deal of the century. This deal means that Muslim countries, controlled by the U.S. and Israel, experience thousands of conflicts of interest. Egypt's Abdel-Fattah el-Sissi, for example, is a loyal ally of Israel. He is trying to mount pressure on Hamas and recently offered to stop the Great March of Return.At the same time, Saudi Arabia, Egypt and the United Arab Emirates are openly siding with the U.S. Their interests compel them to not assume a strong position on Jerusalem.

For the Palestinian people, Jordan is another big loser. Although the King of Jordan derives his legitimacy from his role as custodian of both Islamic and Christian sites in Jerusalem, it would appear that those artifacts were lost a long time ago. Politically and economically weakened, Jordan is in no position to speak up.Turkey is the only bright spot in the region – I do not say this because I am Turkish but because this is a fact. Turkish President Recep Tayyip Erdoğan has assumed a moral position on Jerusalem. History will tell how Turkey cared deeply about this issue when no one else dared to speak up. Yesterday, there were protests in provinces all across Turkey. The country declared three days of mourning to honor the dead.

On the eve of Ramadan, the Palestinians' loss has broken our hearts. Left with the ability to do nothing but pray, the Islamic world will now feast in iftar in safety and peace.