Turkey steps into a new age 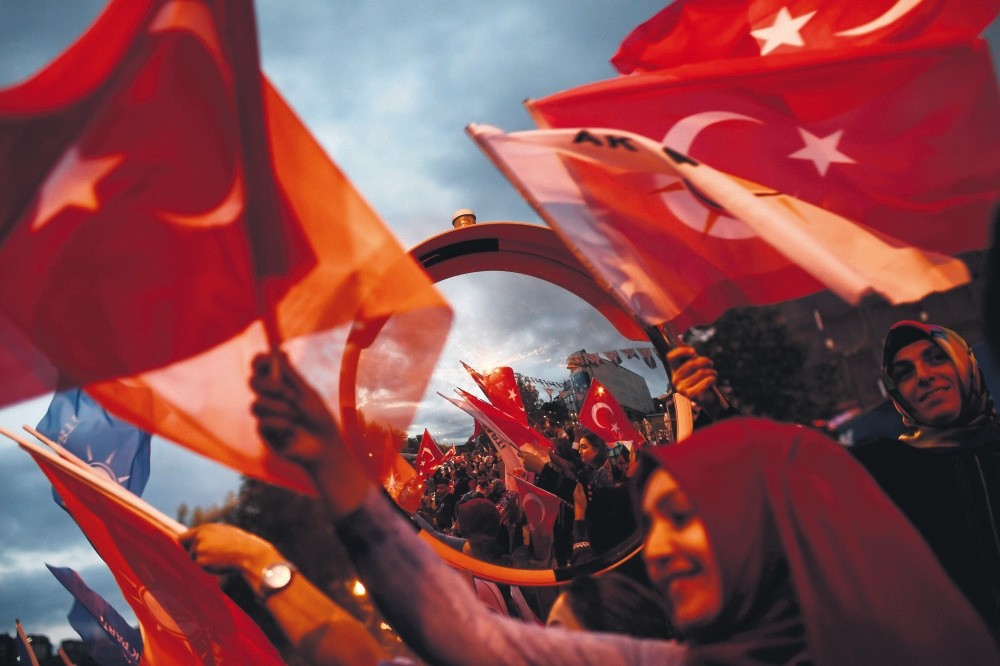 People celebrate President Erdou011fan's and the AK Party's victory in the presidential and parliamentary elections, outside the AK Party headquarters, Istanbul, Sunday.
by Meryem Ilayda Atlas Jun 25, 2018 12:00 am

The results of the Sunday vote show that the Turkish people welcome the system change, demanding more from their state for a brighter future

Most people, who lived through Turkey's serial economic crises in the '90s, would agree that the fragile coalition governments of that era were to be blamed. Simply, the electorate accused small parties and an unstable political environment for the poor management of the economy throughout the decade. That, however, has become just a bad memory.

After ruling the country for 16 years, the Justice and Development Party (AK Party) – this time with its coalition partner the Nationalist Movement Party (MHP) – has been re-elected with a majority in parliamentary votes. President Recep Tayyip Erdoğan, on the other hand, secured a resounding victory in the presidential election, amid an atmosphere of heated debate over the country's economy.

The most consequential debates in the build-up to the elections, however, centered not on the economy rather on President Recep Tayyip Erdoğan's continued stewardship.

The recent spate of bad news related to the economy was not seen by the electorate as a sign of economic mismanagement or a signal of chaos and instability. One thing we can be sure of is that none of the developments discredited Erdoğan in the eyes of the voters, who took their reference points from the economic achievements spanning over more than a decade and not from a short-term crisis that is driven globally.

Voters still remember the old Turkey, which more resembled a poor Balkan nation – gated and partially open, silently ready to do the bidding of its NATO masters, without any character and struggling with malfunctioning state services.

One bitter memory many people will still remember is the 1999 İzmit earthquake and the state's inability to treat and care for the victims in its aftermath. It was a turning point that inevitably paved the way for the rise of a new political party.

Those who remember the coups in Turkey's recent political history also invested their future in the AK Party.

The Turkish middle class grew by leaps and bounds under the AK Party. The higher standard of living also became visible among the middle class and expectations from the government grew proportionally. Demand for better education, health services, university graduates, the number of people going abroad, housing and the number of people asking for loans to buy cars and houses increased as well as prices.

However, the long-term debt now poses a threat to the long-term prosperity of the new middle class, which is mainly the new consumer class. This growth in consumerism has both good and bad effects on the economy. The vibrant consumer economy is always feeding and growing expectations; facing new challenges and unprecedented problems. So, the economy as a driving force for the motivation of voter behavior is not simply an arbitrary economic function that can be corrected with a change of ruling party.The fact that the economic growth and democratization Turkey has reached a considerable level is one thing but to where the country will move from here is another.

Even though snap elections are usually not desirable for the electorate, voter behavior yesterday showed that these elections were a welcome process for the system change.

After the switch to the executive presidency was approved in last year's constitutional referendum, the country's administrative and bureaucratic hierarchy was in a limbo between the old and the new. With this victory, voters have clearly backed the institutionalization of the new presidential system and are expecting it to solve the economic problems while continuing reforms.

Turkey's population is young and dynamic. Still, those who remember the old, malfunctioning country with trepidation influenced the elections' outcome. But that may change – not as a result of the oppositions' attempt to attract conservative voters, but with the results from young voters born in the '90s.

These people are not necessarily anti-AK Party. But having grown up in the AK Party-ruled Turkey, they have embraced the expanding public space, the timely and proper provision of various services, the welfare state, megaprojects and even issues like Alevi and Kurdish identity in the political sphere.

The current electorate may have been won over by the AK Party election campaign that focused on megaprojects, bridges, a giant airport in Istanbul and tunnels beneath the Bosporus. However, the future electorate will probably see these projects as something usual, something that a state needs to provide. Those young voters will demand more institutionalization and civic developments that will drive Turkey's political atmosphere in the coming years.

Meryem İlayda Atlas is Editorial Coordinator of Daily Sabah. She is board member of TRT, the national public broadcaster of Turkey. Atlas also serves as a visiting scholar at Çanakkale Onsekiz Mart University.
Last Update: Jun 25, 2018 1:38 am
RELATED TOPICS