Violence by French police in the spotlight 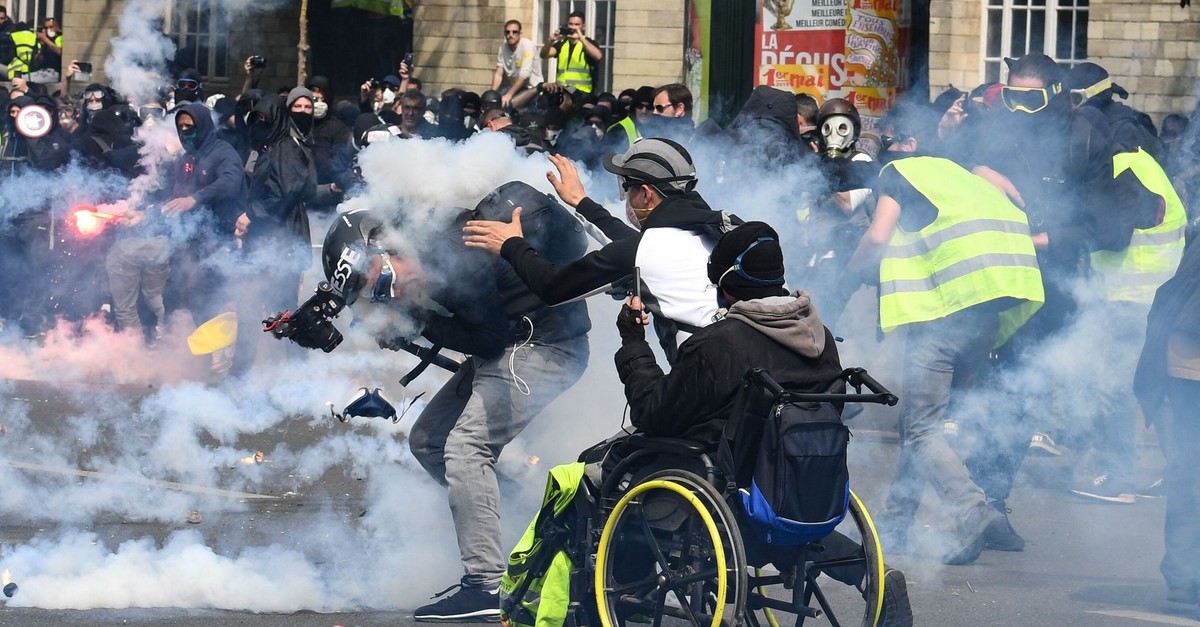 It began on Nov. 17, 2018 as a protest against fuel price rises and quickly evolved into a middle-class revolt and subsequently into a movement against French President Emmanuel Macron, who is seen as "favoring the bosses." It spread across France with university students and even high school students joining in protests. It has turned into a movement, without a leader for the moment, having an anthem of its own, a manifesto and symbols. The "yellow vest" movement, which has led to many social incidents, can provide key clues to future historians. If we are to describe the gilets jaunes (yellow vests) movement, which has been going on for months now, in a concise way, we can say that the French, who have mastered street protests to perfection since the French Revolution, have exhibited their style once again.

They are the veteran protesters of the modern world. Of course, we do not know yet if these protests will be an inspiration to the world as in the 1960s. The yellow vests could not unleash a wave of protests yet but showed their own style and created a global impact. At the least, it has not remained as a movement triggered by "fuel price hikes" and prone to easy manipulation by the government, but exhibited the French style.

The government's initial response was to suppress the protests without paying attention to the demands of protesters. It resorted to force and with great ferocity. According to figures released by the government, at least 11 people died, around 8,400 others were detained, over 2,000 were injured in the protests and 1,796 people received prison sentences.

The depths of the violence

A closer look at the mayhem shows that the violence left 21 people with eye injuries and 204 others with head wounds. Some 68 people sustained leg injuries, while 41 others were wounded in the chest, 16 people in the waist, 13 in the hand and five people lost a hand.

The treatment of the protesters by the French police has been condemned many times by the European Union. Dunja Mijatovic, Council of Europe commissioner for human rights, called on France to show more respect for human rights while dealing with the yellow vest demonstrations, refrain from introducing excessive restrictions on freedom of peaceful assembly and ban the use of tear gas. But these warnings went unheeded. Despite the grim tally, French authorities continue to crack down hard on protesters to maintain public order.

As the protests went on, such scenes have become common. With mutual violence rising, reports on police brutality against yellow vests do not cause as much outrage as before. As the police got tougher, yellow vests went so far as to ransack and set ablaze famous luxury stores on the Champs-Élysées, the most expensive street in Paris, in a show of anger at the upper classes.

Journalists covering yellow vest protests are no different than demonstrators when facing police violence. Among the injured, 56 are journalists, and French to boot. Intending to prevent their image from being tarnished, both protesters and police are somewhat more careful toward representatives of the international media. Several cases of assault on journalists reported in the international media may not have been noted down or found their way into the reports of watchdog groups, since they are not French citizens. French journalists, whose reports on demonstrations the protesters are unhappy about and whom the police try to prevent from taking footage of protests, have already brought the matter before the court on a number of occasions.

Reporters Without Borders (or Reporters sans Frontières [RSF], a Paris-based media watchdog) issued a report on the use of violence against journalists during the yellow vest protests. Indeed, there are ample images and videos on the Internet that reveal how the police rough up journalists and break their cameras. In other words, the French police "cannot deny their use of clash" against journalists. At most, they can offer a security-oriented explanation, claiming that they are not journalists at all, or that it was unclear why they were there. Hence, the RSF report gives the names of journalists together with their media organizations and states that although wearing "Press" helmets or vests identifying them as members of the press and name badges that also indicate their organization, these journalists who work for legal media outlets were deliberately targeted by the police.

According to the report, French police usually target the cameras of correspondents when they are taking photos and fire at them at "close range." Of course, that the photojournalists are targeted most often is not mere coincidence. They are the ones who get caught in the middle of the violence or consciously rush to the "clash scene" in most cases. I chose the word "clash" on purpose. For it paves the way for many kinds of lawlessness. The targeting of journalists when they are easily identifiable as members of the press can be covered up for this very reason as "caught in the middle of clash" or "accidentally harmed." However, as stated in the RSF report based on complaints reported by journalists at police stations, the journalists were subjected to violence not because they "found themselves in the middle of violence" or "were accidentally hit," but were deliberately hit in the back of the neck or back. In some easily accessible videos on the Internet, it is clearly seen that journalists and their cameras are being targeted despite shouting that they are members of the press. To give some examples, Yann Foreix, a photographer for the newspaper Parisien-Aujourd'hui en France, was intentionally hit in the back of the neck by flash-ball rounds on the Champs-Élysées, lost consciousness and was rushed to hospital. Simon Louvet, a reporter for the news website 76actu, was attacked by police while filming a heavy-handed arrest in Rouen. He reported on Twitter that a policeman "aimed his flash-ball gun at me" and that a policewoman "struck my left hand with her baton."

Thibaud Moritz, a photographer for the newspaper Libération, reported that a policeman fired a flash-ball at him while he was covering a protest in Bordeaux. Jérémie Lusseau, a photographer with the Hans Lucas Studio, said he was directly threatened by police while covering a violent arrest. "You'll be next, I'll smash your mouth and your camera," one of the policemen reportedly told him.

In another video shared on social media platforms, which can be watched online, French journalist Nicolas Gregoire uncovered the police violence towards two journalists in Toulouse. It's obvious that what is targeted here is "journalism."

Surely, they are unhappy with the coverage of incidents. So much so that, even the correspondents of world-famous French news agencies also get their share of violence. Journalists report that police typically confiscate their cameras and other professional equipment, along with protective equipment including helmets, goggles and gas masks. In this case, fearing for their safety, correspondents are forced to stop covering the incidents.

For the police, confiscation of a reporter's professional equipment is a way of driving away the journalist at the moment. Véronique de Viguerie, a recipient of last year's Visa d'Or award, refers to the confiscation of a bag containing two masks and two helmets for her and a fellow freelance photographer while covering the protests as a deterrence policy. If journalists do not surrender their cameras or equipment, they are threatened with arrest. RSF called on the French ombudsman to investigate the many reports of serious targeted police violence against journalists.

Unfortunately, no police officers have appeared in court yet for these assaults. President Macron seems to have stepped back to placate the protesters. But it's not hard to see that a series of lawsuits for damages await the government. The issue of reaching a compromise with protesters becomes more complicated for Macron with each passing day.

While French journalists grapple with police violence, attracted by the appeal and uniqueness of the yellow vest protests, hundreds of reporters from around the world rush to France. Among them, there are even some media outlets that have not opened an office or kept a regular correspondent in France before. Visa requests for reporters of some media outlets were rejected on the grounds, "They have not done journalism or been accredited in France before." In other words, they were told that they are not wanted at all for the moment.

But violence against journalists does not come only from the police. Protesters also attack the journalists on the ground frequently. On Dec. 8, 2018, a Turkish-speaking protester assaulted a TRT correspondent working on the ground. In the past, Turkey has repeatedly pointed to the danger of the anti-Turkish opposition that is carefully supported, particularly in France and Germany, moving from rhetoric to action. But this would be the subject of another piece.

Protesters usually vent their anger on media buildings and journalists whom they consider to be publishing pro-Macron news reports and covering the incidents in a biased way. Groups of protesters gathered in front of the offices of news channels France Télévision and 24-hour TV News and shouted "collaborators!" and "you report false news."

There are videos of yellow vests breaking the cameras of reporters despite not knowing which media organization they work for and accusing them of "being puppets of the establishment." I have talked with a friend, a journalist working in France, who spoke on condition of anonymity and said: "We are targeted by both sides and looked upon with disfavor. Sometimes I just wonder if we are really needed because everything is already spread through social media before we write the news stories. The protesters take videos and photos of every incident and post them on social media, thus creating their own stories." Also, this journalist friend thinks that protesters are not wrong to perceive the mainstream media as an instrument of the establishment.

Perhaps the debate going on among the media, protesters and the journalists working on the ground shows that we have entered a very egalitarian order of inequality.

As you may remember, during the protests in Tahrir Square and across Egypt in 2013, the protesters taking instant pictures and videos and posting them on social media was a new phenomenon. That new phenomenon evolved into a fashion and played a critical role in shaping the Arab Spring.

That unfettered and excessive information flow has not remained limited to Arab societies only. During the Gezi protests in 2013, a massive amount of disinformation spread on social media by users ended up being taken seriously by global media and even appeared in news reports. Nowadays, the yellow vest protesters are using social media very actively and shaping the narrative of their actions and opinions. It seems like it has become difficult to avoid the instruments "used in some countries to condemn some things," even for the very nations that produce and support these instruments. Yes, everything is out there and on social media, and this piece is probably not even needed either