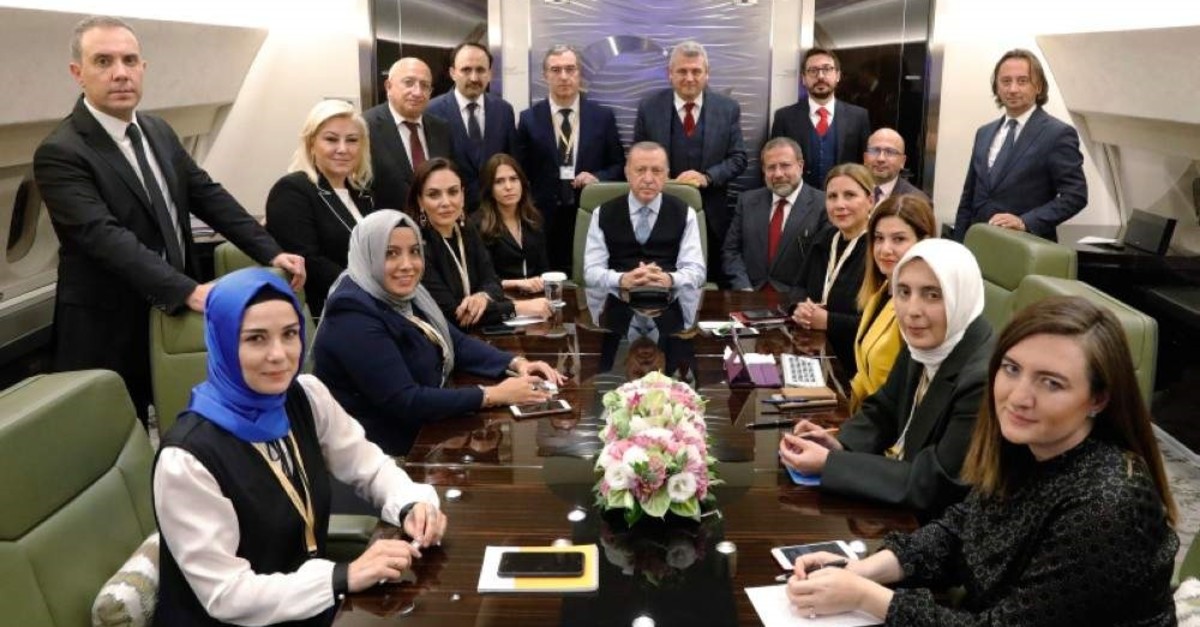 In this photo taken late Tuesday, Oct. 22, 2019, President Recep Tayyip Erdou011fan poses for photo with Turkish journalists in his plane on his way back from Russia, near Ankara, Turkey. (Presidential Press Service)
by Meryem Ilayda Atlas Oct 23, 2019 1:40 pm
Turkey aims to set up the safe zone in northeastern Syria as soon as possible to facilitate the voluntary return of refugees with the support of international actors while it respects and upholds the territorial integrity of the country, President Recep Tayyip Erdoğan told reporters in the Russian Black Sea city of Sochi on Wednesday.
The president was addressing reporters a day after Turkey and Russia reached a groundbreaking deal to establish a safe zone in northern Syria. Under the scope of the deal, YPG terrorists will retreat 30 kilometers within 150 hours, followed by Turkish-Russian joint patrols in the area 10 kilometers into Syrian territory.
“Around 1 million people can be resettled in the area that will be made a ‘safe zone’ under the scope of Operation Peace Spring,” President Erdoğan said, adding that the number can reach 2 million with the inclusion of Raqqa and Deir el-Zor provinces.
However, the president noted that this is not something that Turkey can handle alone and the country needs international support.
“We worked out the costs, made necessary plans, and prepared our projects regarding the matter. We even presented booklets to some 17 leaders whom I talked to at the United Nations General Assembly,” Erdoğan said.
The president noted that Turkey expects this issue to be discussed at a meeting of international donors in Geneva, where the first meeting of the Syrian Constitutional Committee will be held on Oct. 29-30.
“We want to establish residences, health facilities, schools and more to enable the return of Syrians,” the president said.
Russia supports Turkey’s involvement in Ayn al-Arab (Kobani)
Regarding the Syrian city of Ayn al-Arab, referred to as a so-called canton by the PKK-linked People’s Protection Units (YPG), Erdoğan said Russia has always supported Turkey’s involvement, contrary to the U.S. stance. He criticized the Obama administration for dropping weapons, ammunition and other supplies to YPG terrorists there.
“If Turkey is hosting 350,000 people from Kobani, the Obama administration holds main responsibility for this,” Erdoğan said, as he dismissed claims about Turkey not hosting and Kurdish refugees. He continued by saying that Turkey is also hosting Yazidi and other Syrian refugees and does not discriminate against any of the 3.6 million Syrians in the country.
The president highlighted that the Syrians are the real owners of the area and Turkey is only in the region to ensure this.
“We are not an army of occupation,” Erdoğan said, indicating that the Turkish military will leave after its job is done.
Ayn al-Arab is also on Turkey’s agenda and will take care of the process in coordination with the Russians, the president added.
Turkey has no problems with Kurds
The president expressed Turkey’s frustration about the term “Kurds” used by its allies to refer to YPG terrorists.
“Kurds this, Kurds that... We have no problems with the Kurds there. Our problem is only about YPG terrorists,” Erdoğan said, as he noted that both Russians and the Americans refer to YPG as Kurds.
“I told them last night that this is disrespectful to our Kurdish brothers and sisters. Please don’t use this. We are fighting against the PKK and YPG terrorists,” Erdoğan said and added: “It does not matter what race or religion the terrorist comes from. A terrorist is a terrorist.
Erdoğan made reference to the Daesh terrorist group, saying that there are British, German, French and Dutch members of the group.
“Now when defining Daesh, which ethnicity should we highlight?” Erdoğan said, adding that it is not logical to include ethnicity when defining terrorists.
No change in Turkey’s plans if YPG fails to withdraw
The president noted that the deal between Turkey and Russia stipulates that the joint patrols will not be conducted in Qamishli because there are Russian and Assad regime soldiers there.
He said that Russian President Vladimir Putin expressed determination to ensure their withdrawal from the area.
“There are no changes in plans if the U.S. or Russia do not hold their promises as per the agreements,” Erdoğan said, highlighting that Turkey is determined to resume its operation if its allies fail to keep their word and the YPG fails to withdraw 30 kilometers to the south.
Erdoğan noted that he reminded Putin about the possibility that YPG terrorists may join the Assad regime army instead of withdrawing but the latter assured him that it would not happen.
“We will not let them,” Putin assured Erdoğan.
Turkey, Russia and Iran spearheaded the Astana peace process to end the Syrian conflict in Nur-Sultan (formerly Astana), Kazakhstan's capital. The trio have held over a dozen meetings to discuss the Syrian crisis.
Syria has been locked in a vicious civil war since early 2011, when the Bashar Assad regime cracked down on pro-democracy protests with unexpected ferocity.

Meryem İlayda Atlas is Editorial Coordinator of Daily Sabah. She is board member of TRT, the national public broadcaster of Turkey. Atlas also serves as a visiting scholar at Çanakkale Onsekiz Mart University.
Last Update: Dec 20, 2019 1:11 am
RELATED TOPICS