Pinning all hopes on a dictator 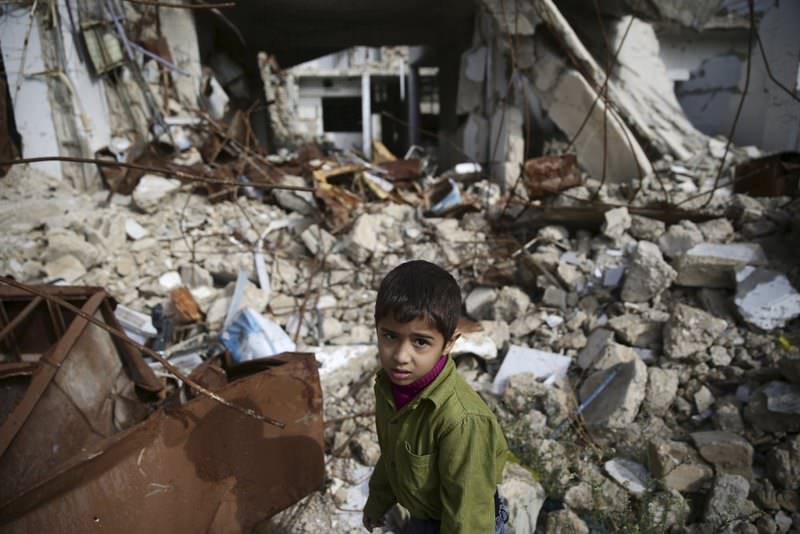 A boy walks amid buildings damaged by Russian airstrikes in the eastern Ghouta town of Douma in Damascus, Syria.
by Nagehan Alçı Oct 28, 2015 12:00 am

Russia's support for the Assad regime and the U.S.'s avoidance of taking action to end the violations in Syria have been strengthening Assad's position in the international system

New developments have taken place in Syria where things are now going in favor of President Bashar Assad following Russia's direct involvement in the war. The most important development is Assad's recent visit to Moscow. What will this visit change? Official statements indicate that Russia's airstrikes in Syria and its methods for fighting terrorist groups were addressed during the visit. In an interview on Russian state-run television on Saturday, Russian Foreign Minister Sergey Lavrov said the Free Syrian Army (FSA), which fights the Islamic State of Iraq and al-Sham (ISIS), might be supported with airstrikes and argued that U.S. coordination is needed to this end.

Meanwhile, there are ceaseless developments and claims suggesting that Russian President Vladimir Putin's administration, which has involved itself in the war under the pretext of fighting ISIS, makes new moves every day in order to secure Assad's position of power, and the West is paving the way for Putin to save Assad. A German website called Die Freie Welt published a piece that says: "If Putin's support for the Assad government succeeds, it will determine the faith of all of us." Although the U.S. administration seems to work on a formula in which Assad will be impermanent, it is not troubled with leaving the field to Putin and his policies at the expense of fighting ISIS without shouldering any responsibility.

As one can remember, in last week's column I touched on the particulars of my meeting with an important source who summarized Ankara's foreign policy's position on Syria. Ankara argues that Assad gave rise to ISIS, which threatens the whole of the world, instead of the Syrian opposition, which threatened Assad alone. The source offered credence to this argument saying that former al-Qaida members were released from prison and the regime was not engaged in any direct fight against ISIS despite battling with FSA. This argument is confirmed by the fact that Assad increasingly gains strength as an alternative to ISIS. Unfortunately, a bloody-minded tyrant, who is responsible for the death of thousands and displacement of millions, is striving to gain strength as an actor against a terrorist organization that butchers people and blemishes the name of Islam. The same source said that 80,000 out of a total of 2.5 million Syrians migrated to Turkey because of ISIS and other reasons, and the remaining migrated because of the regime.Due to the panic caused by ISIS and the incapacity of President Barack Obama's administration, Assad, who is the chief architect of this desperate picture, has again come to be taken as an interlocutor. This clearly shows the failure of the international system. Ankara has acted correctly since the beginning by opening its doors to millions of refugees and objecting to a dictator's atrocities. The failure of the international system and the U.S.'s avoidance of taking action despite the many violations of red lines has led to assertions that Ankara pursues a wrong path. But what is wrong is not Turkey's path, but the world's unscrupulousness. However, Ankara does not have the chance to impose its own policy. Therefore, it tries to minimize this injustice as much as possible and initiate a transition period. History will definitely condemn the international community for Syria and Turkey will make new history with the refugees it embraces.
Last Update: Oct 28, 2015 2:06 am
RELATED TOPICS