Humanity is dying beside us 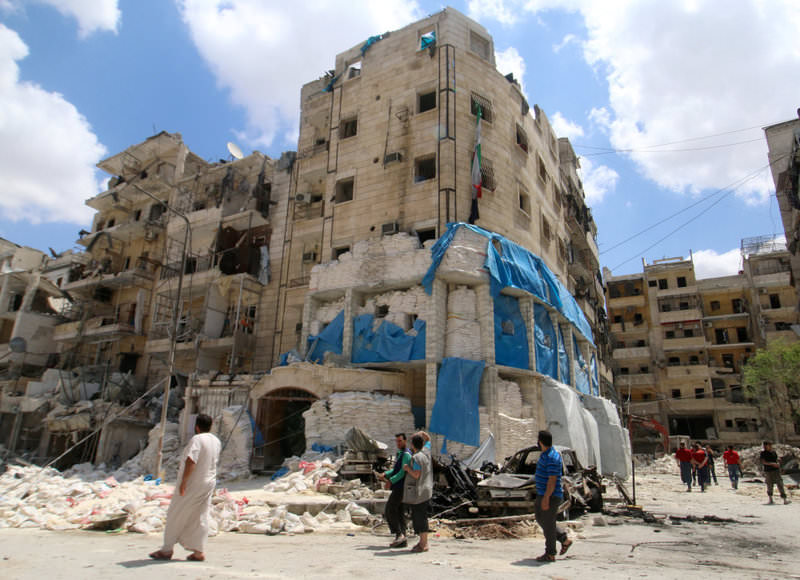 People inspecting the damage at the al-Quds hospital after it was hit by airstrikes, in a moderate-held area of Syria's Aleppo
by Nagehan Alçı May 04, 2016 12:00 am

While Syrian regime forces backed by Russia pummel Aleppo, devastating the civilian population and cutting off aid routes, the White House continues to be non-committed to stopping the carnage

May 2016 will go down in history as a month of shame. A long history, a great amount of humanity and an old civilization is being demolished in Aleppo, a fate the whole world has remained indifferent to. As the nightmare scenario, which Ankara has voiced since the beginning of the Syrian civil war, is coming true step by step, the great powers are consistently preventing Turkey from getting involved in Syria. Meanwhile, Syria's Bashar Assad, who has been blatantly slaughtering his people for more than five years, is striving to regain Aleppo through one of the bloodiest massacres that Syria has experienced in this war.The death toll has exceeded 200 over the past 10 days, and more than half of the dead are women and children. The people of this huge city are dying one by one and the survivors now lead a life in darkness in underground shelters with no electricity and hardly any water. Humanity is in peril. In early February, the Assad regime closed the humanitarian corridor between Turkey and Aleppo, besieging opposition groups with the support of Russian fighter jets in northern Aleppo. Now, it aims to close the Castillo-Handarat road, which is the only way of escape for opposition forces in the center. This road provides passage to Idlib in central Aleppo and to the opposition-held area that spans from Idlib to the Turkish border.

With the aim of blocking this road, Assad has overtly violated the cease-fire, which other actors pretend is still in force, for the entire world to see. The whole of the city has been overwhelmed by airstrikes. Even though this picture is as clear as day, the U.S. and Russia still pretend to seek a solution to the Syrian crisis in Geneva. They have reached an agreement that encapsulates only northern Latakia and eastern Guta. Russia is the root cause of this humanitarian plight. Certainly, we must criticize the U.S. for pursuing an unstable, self-seeking and dishonorable policy, but things would be completely different now were it not for Russia, which has been providing overt support to the murderous Assad regime all this time.

Washington called on Moscow to exercise its influence on Assad to stop its offensives in Aleppo. Certainly, one cannot think that Assad can maintain attacks without the support of a great power. Well, what did Moscow do? Nothing. It has not yet responded to the U.S.'s call. Furthermore, the Russian Defense Ministry has announced that some groups will not be included even if a cease-fire is ensured. In short, the Assad regime is openly carrying out airstrikes on civilians in central and western parts of Aleppo to reclaim the city with the support of Russian war crafts. On the other hand, Shiite militias and Assad's troops fire artillery in the south. Reports say that opposition forces and al-Nusra Front are battling against regime forces and militia in the town of al-Ays in southern Aleppo.

Even though it is claimed that the Democratic Union Party (PYD) fights against the Assad regime, one can clearly see the cooperation between the two in Aleppo. The PYD and Assad, who previously worked jointly to close the corridor that spanned from central Aleppo to Turkey, are now joining hands to close other corridors. On Monday, United Nations Secretary-General Ban Ki-moon said the cease-fire must be extended to include these areas in the face of this terrible picture. U.S. Secretary of State John Kerry went to Geneva to discuss the situation. However, all these calls and meetings do not go beyond a wish unless Russia is stopped. People are dying with every passing minute. I think things would be different if the U.S. had intervened in Syria as it did in Bosnia even though it is late. Unfortunately, mankind is dying beside us every day.
RELATED TOPICS