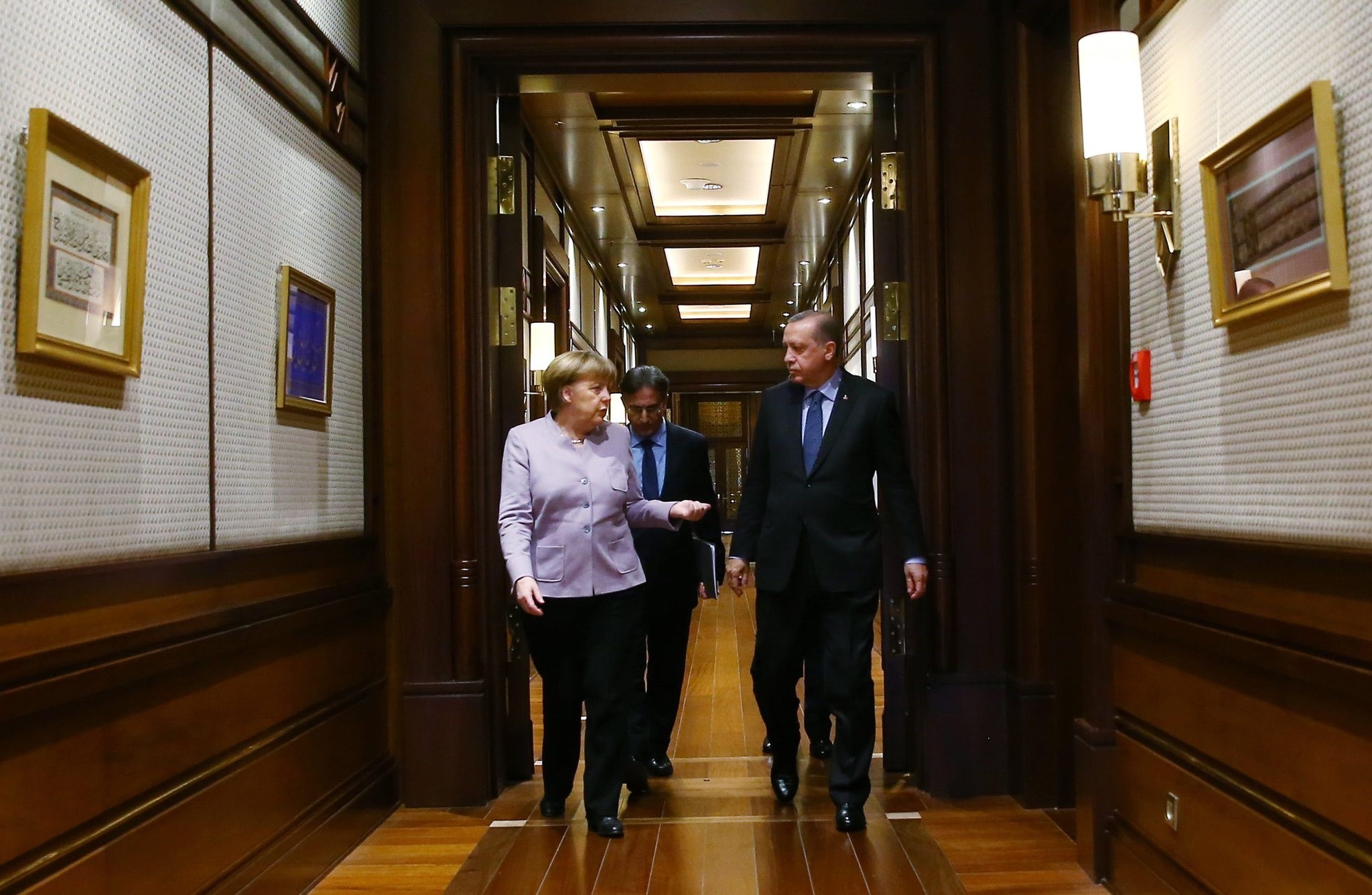 President Recep Tayyip Erdou011fan and German Chancellor Angela Merkel arrive for a press statement after a meeting in Ankara, Feb. 2.
by Nagehan Alçı Sep 06, 2017 12:00 am

Since attacking Turkey favors German politicians in their campaign for the upcoming elections, it is impossible to expect rapprochement between Turkey and Germany

The tension between Germany and Turkey has been ongoing for a while. The two countries, who have long-established relations of alliance and friendship, have issued harsh statements against each other as their divergence continues. But what are the reasons underlying this tension? Is there any chance for rapprochement between the countries?

The main reasons for the tension can be collected under several titles. Relations had their first major breakdown following the July 15 coup attempt because Turkey believed that Germany did not side with the country in the face of the atrocious coup attempt. Frankly, Turkey was not wrong about that, and Ankara has lost its trust in Germany since Germany tepidly and belatedly condemned the attempted coup, it did not take a stance against the Gülenist Terror Group (FETÖ) leader Fetullah Gülen who orchestrated it, and did not take any initiative regarding the FETÖ operatives in Germany despite all the warnings Turkey sent. While this is the main problem for Turkey, in February Germany reacted to the arrest of journalist Deniz Yücel, a dual citizen of Germany and Turkey, and considered it unlawful. Despite that, President Recep Tayyip Erdoğan and other top state officials defended the arrest of Yücel and sent a message to Angela Merkel via the incident. Following this unresolved crisis, another German citizen named Peter Steudtner was arrested on allegations of espionage during a humans right meeting held on Istanbul's Büyükada island, which escalated the diplomatic spat. Germany warned its citizens to be careful in traveling to Turkey, leading to a dramatic decline in the number of German tourists visiting Turkey.

In addition to the ongoing tension caused by the coup attempt issue, the issue of İncirlik Air Base also came onto the agenda. In May, Germany granted asylum rights to a number of soldiers, diplomats and judges who are alleged to have sided with the coup attempt. After that, Turkey did not allow German parliament members to visit the German base in İncirlik. Relations reached a new low due to that and German troops began to withdraw from the base in July.

Meanwhile, Germany accused Turkey of engaging in espionage in Germany regarding people suspected of having links to FETÖ. An investigation was kicked off in March. Also, a list the Turkish National Intelligence Organization (MİT) submitted to Germany's Federal Intelligence Service (BND) came under the spotlight.

On top of all these developments, President Erdoğan's and other ministers' scheduled meetings in Germany were prohibited in the run up to the April 16 constitutional amendment referendum in Turkey. Having canceled their meetings and rallies, Germany directly intervened in Turkey's internal affairs by actively taking up a stance against the "yes" campaign, which heightened the tension.

Germany goes to the polls on Sept. 24. Apparently, blasting Turkey in the face of such a background favors German politicians. Therefore, it is not possible to expect reconciliation in relations before the elections. But restoring the troubled relations after the elections would favor both countries. If Germany supports Turkey with regard to the July 15 coup attempt and FETÖ, Turkey will tone down its rhetoric and might re-evaluate Germany's requests about detentions and arrests.