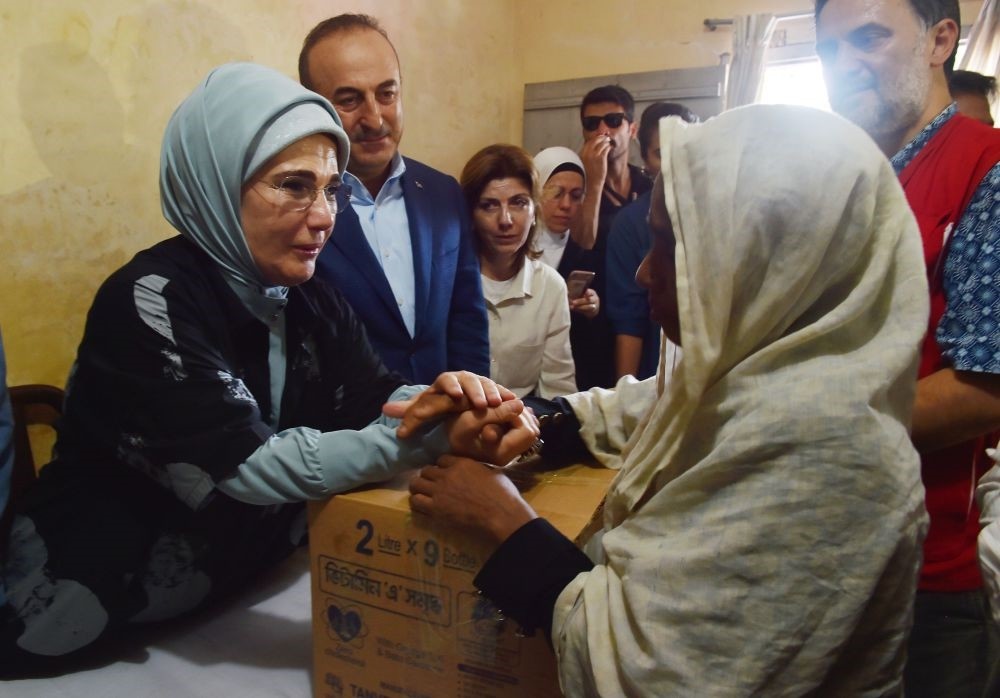 First Lady Emine Erdou011fan, left, and Foreign Minister Mevlu00fct u00c7avuu015fou011flu, second from left, give out aid boxes during their visit to the Kutupalong Refugee Camp, which is home to Rohingya Muslims who fled from Myanmar in Cox's Bazar, Sept. 7.
by Nagehan Alçı Sep 14, 2017 12:00 am

With an urgent telephone call I received last Tuesday, I embarked on the most enlightening experience of my life. The telephone call was from the Turkish presidency inviting me, on short notice, to first lady Emine Erdoğan's visit to the Rohingya Muslims who have taken refuge in Bangladesh.

Packing up hastily, I got on the plane heading to Bangladesh the next day. Along with the first lady and her son Bilal Erdoğan, Foreign Minister Mevlüt Çavuşoğlu, Family and Social Affairs Minister Fatma Betül Sayan Kaya, Justice and Development Party (AK Party) Deputy Chairperson in Charge of Human Rights Ravza Kavakçı Kan and Serdar Çam, the head of the Turkish Cooperation and Coordination Agency (TİKA), which extended a helping hand, were also on the plane.

After nearly a seven-hour flight, we arrived in Bangladesh's capital, Dhaka. It was around 2:30 a.m. when we landed. After getting some three to four hours of rest, we headed to the airport again early in the morning. We needed take a one-hour flight and follow a land route in order to arrive at the camp where the Rohingya were taking refuge.

When we landed in Cox's Bazaar, which has the closest airport to the camp, I realized that I must be ready to see much sheerer poverty than I saw in Dhaka, the capital of the world's poorest country. I saw endless commotion, chaotic traffic, where no concept of lanes seemed to be known, and swarms of people and animals outnumbering vehicles on the road. The vehicles were constantly honking in the jam.

After the short flight, we got in cars waiting for us and it took two hours to reach the camp in the midst of this chaos. When we finally made it to the Kutupalong camp, my perception of space and time seemed to have jumbled.

A similar chaos was also prevalent at the camp. Bangladesh suffers such an extreme level of poverty that the camp was not very different from the rest of the country. It was overcrowded and had extremely poor sanitary conditions.

As soon as we entered the camp, we found ourselves in the midst of a large crowd. The first lady, ministers and the delegation members sat around a table in a small cottage and listened to the stories of those who fled from Myanmar. The stories were all a disgrace to humanity.

The story of a young woman who escaped into the woods after her children were killed before her very eyes, the struggle of a young man whose arm was cut off, elderly people who have difficulty in walking, the ones whose parents were killed. Bearing witness to a human tragedy first hand was an excruciating experience.

Meanwhile, the temperature was at least 35 degrees Celsius (95 degrees Fahrenheit), and the humidity was so high that one can hardly breathe. Emine Erdoğan was barely able refrain herself from bursting into tears while listening to the stories.

Later on, we wandered around the camp. The ground was covered in mud. As we try to slog through the sticky mud, the Bangladeshi foreign minister wanted to stop the delegation since the conditions were really bad, but they did not stop walking. The first lady, Foreign Minister Çavuşoğlu and the delegation accompanying them kept walking until they toured the entire camp. Meanwhile, a photograph showing Emine Erdoğan hugging a Rohingya woman was taken.

The conditions at Kutupalong camp are really poor. The number of people has already exceeded the capacity of the camp. Since Aug. 25, around 270,000 people from Myanmar have taken refuge in Bangladesh, most of whom are at this camp. The accommodation facilities, food and hygiene conditions are far from being sufficient. People sleep on the muddy ground and most of the children have no clothes on.

Turkey has delivered 1,000 tons of aid to them. The aids consisted of four staples: Rice, sugar, oil and lentils. As President Recep Tayyip Erdoğan told the journalists accompanying him upon his return from Kazakhstan, the purchases will be made from this location to revive the Bangladeshi economy. Also, step-by-step aid of tents and clothing are planned.

Turkey's sensitivity to Rohingya Muslims set an example to the rest of the world. The first lady's visit to the camp also attracted the attention of the Western media. Meanwhile, President Erdoğan brought up the issue during Organization of Islamic Cooperation (OIC) summit in Kazakhstan, and a declaration has been penned in this respect. He also plans to bring up the subject during next week's U.N. meeting in New York.

The massacre of Muslims in Myanmar, which has been the greatest tragedy in recent years, has passed into history as a disgrace. Amidst all this, Turkey stands out again as the most conscientious country, raising its voice loudly and clearly against the massacre.