Domestic and foreign troubles in Iran 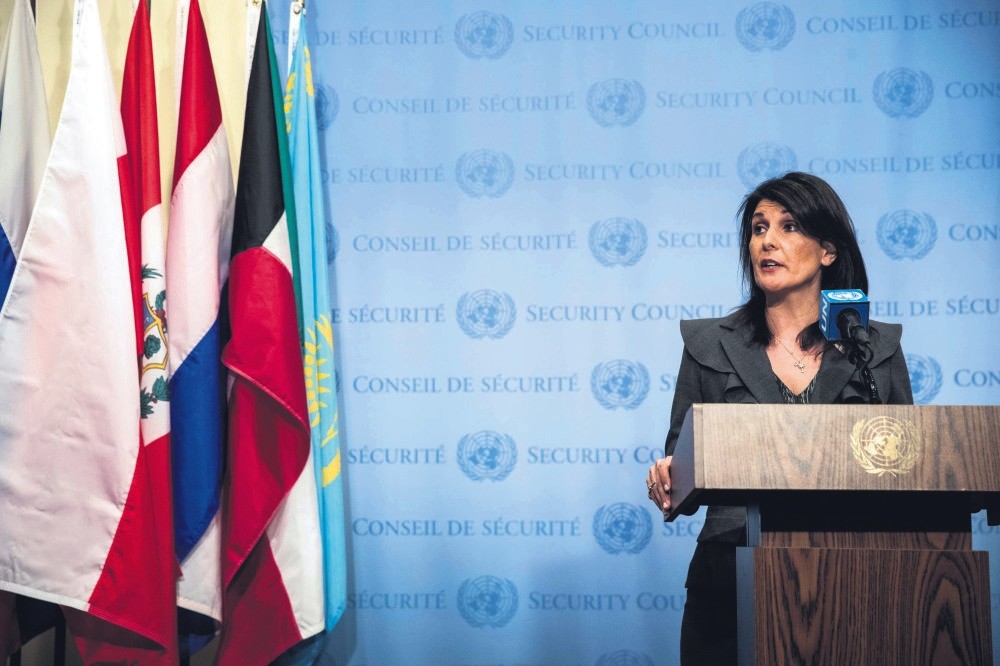 U.S. ambassador to the United Nations Nikki Haley speaks during a press conference, urging the U.N. to convene to discuss the ongoing protests in Iran, U.N. headquarters, New York City, Jan. 2.
by Nagehan Alçı Jan 04, 2018 12:00 am

The wave of Middle Eastern uprisings has now hit Iran, and it seems that it will have long-standing impacts on the country's policies

Questions about what is happening in Iran are probably the most frequently asked concerning developments in the world at the moment. Are the protests, which started last Thursday with an increasing daily death toll, the voice of the masses who are rebelling against the economic challenges in the country or are they an operation organized by the U.S. and Israel? Is there any difference between these protests and those in 2009? And most importantly, will this process grow into a revolution?

It is difficult to find definite answers to these questions, but we can come to a conclusion at least by comparing and assessing the latest developments. These protests, which started in extremely conservative cities such as Mashhad and Qom, stemmed from economic troubles this time. Iran has very high unemployment and rising financial difficulties. The protests in 2009 began with the alleged fraud in the presidential election. Reformist politician, Mir-Hossein Mousavi and Mehdi Karroubi alleged that the election, which was won by Mahmoud Ahmadinejad, was rigged. Then, protestors in northern Tehran, which has a wealthy and secular population, went to the streets.

Now, Tehran is coming up from behind, and mainly conservative young people are hitting the streets. One remarkable thing is that the current president of Iran is reformist Hassan Rouhani.

There is clear tension between the elected president and the mullahs in the country. Rouhani symbolizes the change against Supreme Leader Ayatollah Ali Khamenei and is approaching the protesters more moderately. Khamenei says that a direct external force is organizing the events, giving a signal of intervention. Such an intervention may also turn into an intervention against Rouhani.

For me, the frustration caused by the collapse of the nuclear deal signed during former U.S. President Barack Obama's era under current President Donald Trump's administration has a big part in these protests. The Iranians, who had have lived under sanctions for years, hoped that they would be relieved with the nuclear deal, but the collapse of expectations has led the accumulated tension to burst.

On the other hand, there is the Syrian civil war that has been going on for years, and the Iranians see what is happening to their neighbors. That is why they will be cautious about an insurgency like the Arab Spring.

Of course, I do not mean that foreign powers have no finger in these incidents. There are U.S. and Israeli agents in the country, and they are trying to expand and manipulate the protests. One of Trump's main targets is to subvert the Iranian regime. Moreover, the U.S. sold a horrendous number of weapons to Saudi Arabia this year. He wants Iran to be undermined from inside and then the regime subverted. However, we cannot say that the protests are entirely a Western conspiracy. There is definitely domestic grounds and umbrage that gave rise to them.

It is important to note that Iran has gained much strength as a result of Russia's influence in the Syrian civil war in the past few years. There is the U.S.-Saudi Arabia bloc against the Russia-Iran bloc and it is clear that they want to redesign the Middle East through a Sunni-Shiite conflict.

At this point, Turkey should be very careful. The Foreign Ministry's call for sobriety on Tuesday was quite befitting. The meaningful and critical position for Turkey is to stay out of events with a unifying approach and make an effort to prevent the fire from growing.