The pros and cons of an Afrin operation 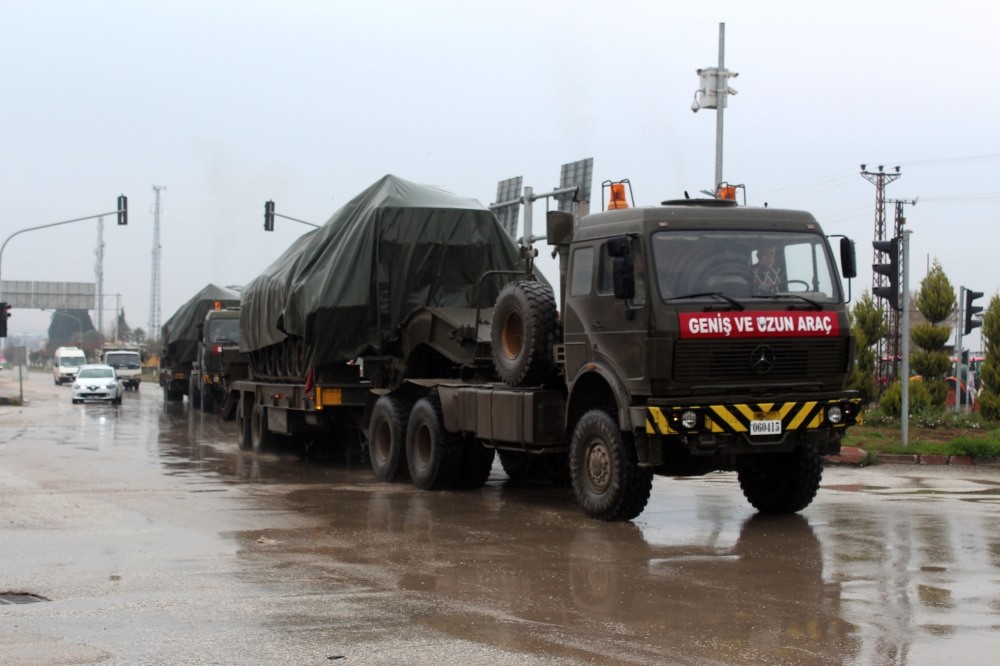 Trucks carry tanks in Turkey's southern city of Hatay as Ankara prepares to launch a counterterrorism offensive against PKK-affiliated elements in Afrin, Syria, near its border, Jan. 16.
by Nagehan Alçı Jan 18, 2018 12:00 am

The Afrin operation has been ready to launch for almost a week, as Turkey cannot remain silent to threatening developments, including the defiance of the Democratic Union Party (PYD) and its People's Protection Units (YPG), arrogant statements issued by the U.S. and the groups' mobilization in northern Syria and Iraq with the support of the U.S. To that end, President Recep Tayyip Erdoğan has been strictly opposing U.S. support to the YPG, reiterating that Turkey is ready to intervene in Afrin.

The Turkish Armed Forces (TSK) has deployed 10 tanks to the border. Upon Turkey's diatribe, Colonel Ryan Dillon, the spokesman for Operation Inherent Resolve (OIR), remarked that the Pentagon would not impede Turkey's operation. In other words, the U.S. is also ready for such an operation. But what would Russia's response be? Moscow will probably not object to Turkey's self-protection move against such a threat. I also would like to point out that Russian President Vladimir Putin and Erdoğan had a telephone conversation last week during which this issue must have certainly been brought up.

So, what will be the pros and cons of the Afrin operation? First, it must be noted that Afrin, which is entirely controlled by the YPG, is located across from Turkey's Hatay province. The group allegedly positioned around 200,000 to 400,000 civilians in the city to form a shield. The TSK has taken the required measures to get ready for an operation and collected all the necessary data, footage and intelligence about targets. If the Air Force starts the operation, the YPG will probably be hit through pinpointed targeting. Of course, mobilizing land forces in the first place would be much riskier. Meanwhile, dissident groups can also be incorporated in the operation. But it must be extremely careful to prevent any harm to civilians. If the YPG is eradicated from Afrin, the PYD will receive a major blow.

Accordingly, a number of German newspapers have reported that the fall of Afrin will bring an end to the Rojava dream. If an Afrin operation is successful, the YPG will get stuck east of Jarablus, which means a substantial loss of power to the group. Nevertheless, it is obvious that the U.S. wants to form a YPG corridor through Iraq and Syria.

Therefore, Russia's position can play a key role at this point. Russia might prefer the control of Assad in northern Syria to the U.S., which wants to position the YPG as a buffer zone against the Russia-Iran-Assad alliance. Afrin is of critical importance for Turkey since infiltration by the outlawed PKK is made via this location to a large extent. The city functions as an operating base. Only last week, five suicide bombers were apprehended on the border. According to academic and journalist Bora Bayraktar, this area also threatens the region Turkey cleansed in Operation Euphrates Shield, and many attacks targeting Azaz are organized there. Furthermore, Afrin can be united with Idlib after it is captured from the YPG. For all these reasons, an Afrin operation is crucial.

The U.S. overtly supports the PYD forming a state or establishing at least a federative structure and acts in line with this motivation across Iraq and Syria and has formed a force from the YPG at our border to expand its sphere of influence. Meanwhile, Russia's influence in the region has been consolidated to a great extent. The country tries to impede the PYD yielding to U.S. control by siding with the group. However, the latest U.S. moves have surely unsettled Moscow. Turkey has to develop versatile policies, protect its border security and rule out threats. It is not easy to perform all these tasks simultaneously. Consequently, if Turkey achieves the cleansing of Afrin, it will have a much stronger position when the balances in the Middle East are reshuffled."