Afrin offensive not a choice but an obligation 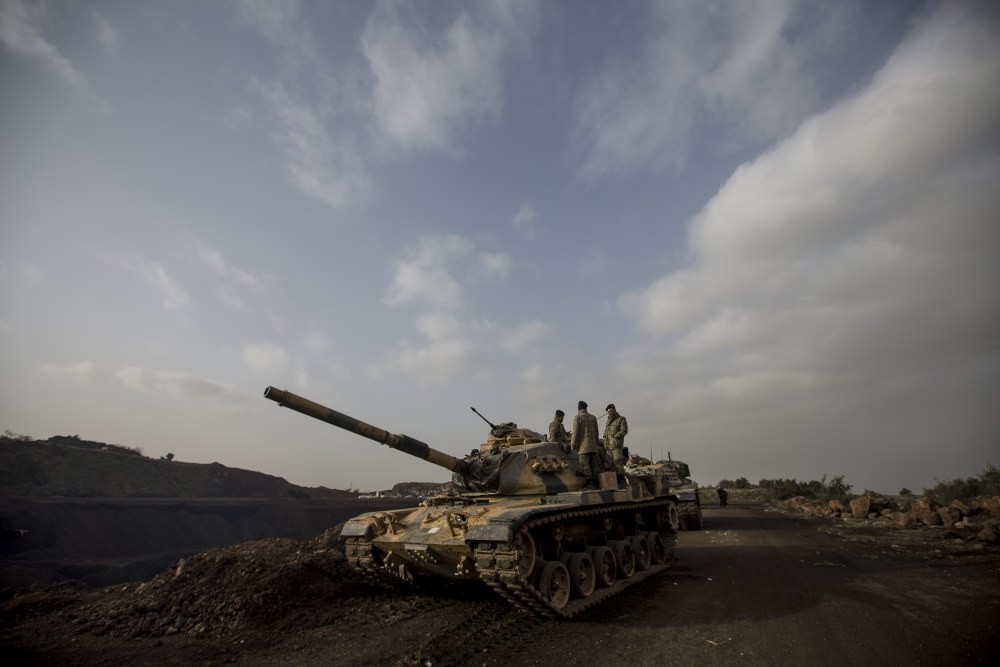 Turkish soldiers prepare tanks before crossing the Turkish-Syrian border, in the Hassa district, Hatay, as part of Operation Olive Branch that was launched to eliminate terrorist positions in northern Syria, Jan. 22.
by Nagehan Alçı Feb 01, 2018 12:00 am

Turkey has legitimate rights to carry out its cross-border operation in Afrin, yet the Trump administration fails to notice its ally's concerns and bilateral relations have hit rock bottom

Turkey's Afrin operation is about to enter its second week. Our Western friends, especially the U.S., have to acknowledge that Operation Olive Branch is one of the most critical turning points in Syria.

Turkey's rightful fight against the outlawed PKK and its offshoot People's Protection Units (YPG) through its own means has the potential to influence the balances in Syria as well as the international negotiations on Syria. We are approaching a period during which the cards will be reshuffled in Syria – where the main actors are the U.S., Russia, Iran and the Damascus regime.

For many military experts, the progress of the Afrin operation up to this point indicates that the Turkish military is not acting hastily. The operation might be advancing slowly under the present circumstances and plans, which is crucial to minimize collateral damage and assure progress. Currently, there is progress in the rural areas of Afrin at seven distinct points. This progress is occasionally being consolidated with strategic retreats. We can see an increase in this number in the upcoming days. Thanks to this, the YPG is being undermined and distracted. The terrorist group is mostly in firm spots in an attempt to prevent losses. Turkey, on the other hand, is decreasing the YPG's resistance capacity, particularly in the city, by targeting the group's logistic bridges and ammunition storages.

It is known that the YPG had been making considerable preparations for a while, but they did not take the Turkish Air Forces into account. Consequently, the jets, unmanned aerial vehicles (UAVs) and helicopters are directly affecting the progress in the field. The Turkish military is battling under harsh circumstances. Meanwhile, there is intense diplomacy. It is obvious that common ground with Russia has emerged while the main problem is likely to be experienced in relations with the U.S. However, the immediacy of the threat has reached such an extent that Turkey cannot afford to prioritize bilateral relations. Plus, given that the U.S. has not kept any of its promises so far, what the statements from U.S. officials mean for Turkey can be grasped more clearly.

As a Turkish journalist who studied international relations, I have always defended the importance of the strategic alliance between Turkey and the U.S. Radical figures in the Turkish media have been labeling me as an adherent of the U.S. for a long time, but I would like to say for the present situation that the U.S. is in chaos, as illustrated by the latest contact between President Recep Tayyip Erdoğan and U.S. President Donald Trump. As Foundation for Political, Economic and Social Research (SETA) Foreign Policy Director Ufuk Ulutaş argues, those who want to poison the bilateral relations in the White House and Pentagon hand a text to Trump. Trump does not read it, but issues statements in such a way that the subjects not discussed in the White House look as if they were mentioned.

The U.S. continues to demand from Turkey without giving anything back, even though Turkey has been an ally of the U.S. all along. Statements have been pouring out of the U.S. Lately, U.S. Secretary of State Rex Tillerson brought forward the issue of a buffer zone. But the question is if the U.S. wants this buffer zone free from terror for the entirety of the Turkish-Syrian border or if the country only wants it on the Afrin border due to the ongoing operation.

Even in the face of Operation Olive Branch, the U.S. has not exerted any effort to respect Ankara's concerns about threats and resolve the security issues the U.S. created. The country is acting so arrogantly that it cannot foresee the possible troubles the U.S. will encounter due to this obstinacy. From the special representatives to newbie analyst candidates, the U.S.'s Syria policy is handled with arrogance and obsession with power rather than rationality.

What they cannot get is that providing border security is not a preference but an obligation for Turkey, and the country can run the risk of losing a great deal in order to accomplish that.