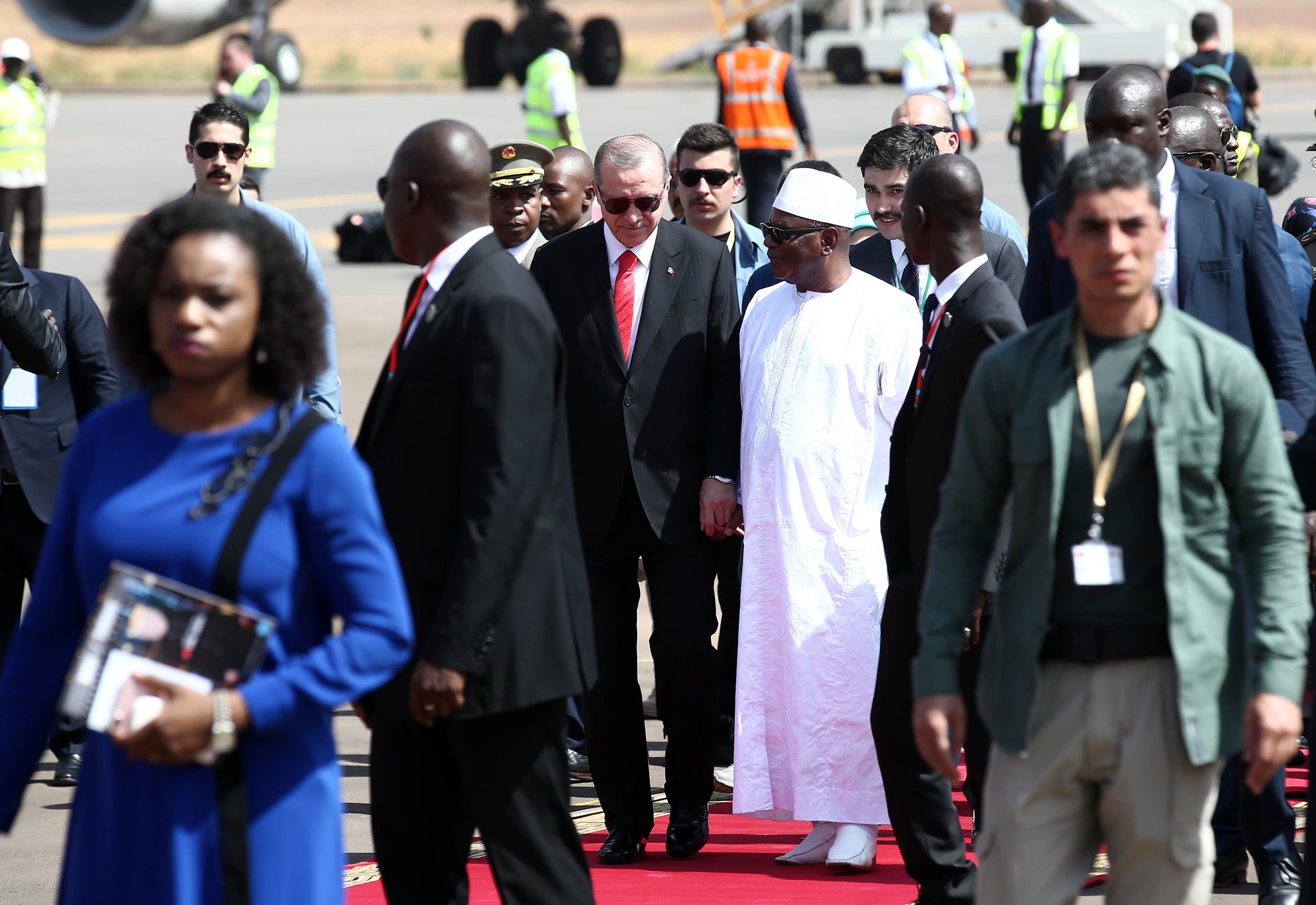 President Erdou011fan and Malian President Keita walk after Erdou011fanu2019s arrival at Bamako airport as part of his diplomatic visits to four African countries, Mali, March 2.
by Nagehan Alçı Mar 08, 2018 12:00 am

Last week, I had a chance to take part in President Recep Tayyip Erdoğan's West Africa tour along with his delegation. The tour, which was comprised of Algeria, Mauritania, Senegal and Mali, has been significant in terms of portraying Turkey's changing image and power over the past years.

Over the past decade, Turkey and President Erdoğan have given hope and courage to the peoples of this unfortunate continent, who have been colonized and deprived by the West for centuries. I can see this hope very clearly every time I set foot in Africa.

During the latest tour, it was worth seeing how warmly and enthusiastically the people welcomed Erdoğan while the tour was considered a great occasion on the agendas of the countries.

In Algeria, Erdoğan occupied all the captions and headlines in the media. The reopening of Ketchaoua Mosque, which was restored by the Turkish Cooperation and Coordination Agency (TİKA), was a meaningful gesture for Algerians as the mosque was closed down during the colonial period and therefore symbolizes tyranny in the country. Besides, many considerable agreements have been signed in the country. The agreements made in economy, culture and infrastructure will consolidate the ties and improve cooperation between the two countries.

Mauritania, meanwhile, is a poverty-stricken country located in a desert that has remained untouched to a great extent. Fishing is the leading economic activity in the country, which is also known as the land of hafizes. The number of people in the fishing business heading from Turkey to Mauritania is increasing each day. A part of the sea bass served in restaurants located by the Bosporus comes from this country.

The welcoming ceremony Mauritanians organized for President Erdoğan was worth seeing. Men and women of all ages were waving at us as they poured into the streets as if the entire country were outside at that moment. I saw that their joy was genuine as Erdoğan instilled in them with hope and self-confidence after years of colonization.

Although Senegal is more dynamic and developed compared to its neighbors, the long-lasting French colony left profound traces in the country and thus became a part of daily life. The official language of Senegal is French, and it is possible to see the French influence in the main squares of the capital city Dakar. But it is said that over the recent years, Turkey has been the second most influential country in Senegal following France. Erdoğan's Turkey has sparked great excitement in the country as he raises his voice against injustices across the world, especially within the Islamic world.

Our last stop was Mali, one of the least fortunate countries in the world. It is hard to depict the level of poverty in Mali. Although the per capita income is $780, the real monthly income for the majority is actually around $50 on average due to the unjust income distribution. In the capital city Bamako, almost all the houses are shanties that do not even have bathrooms. People meet their most basic needs on the streets. On top of all the poverty, they are confronting the terror caused by Boko Haram. During our visit, top security measures were taken everywhere since attacks against tourists are often organized.

The hope Turkey embodies and the increasing business volume are crucial for Mali. Turkey and Erdoğan provide them with the belief and persistence to break their ill fate.

Turkey seeks progress by cooperating with Africa with a focus on mutual interests, unlike the colonizers who tormented the continent. This policy will offer an antidote to the colonialist mindset remaining from the past.