How Western allies lost Turkey after the coup attempt 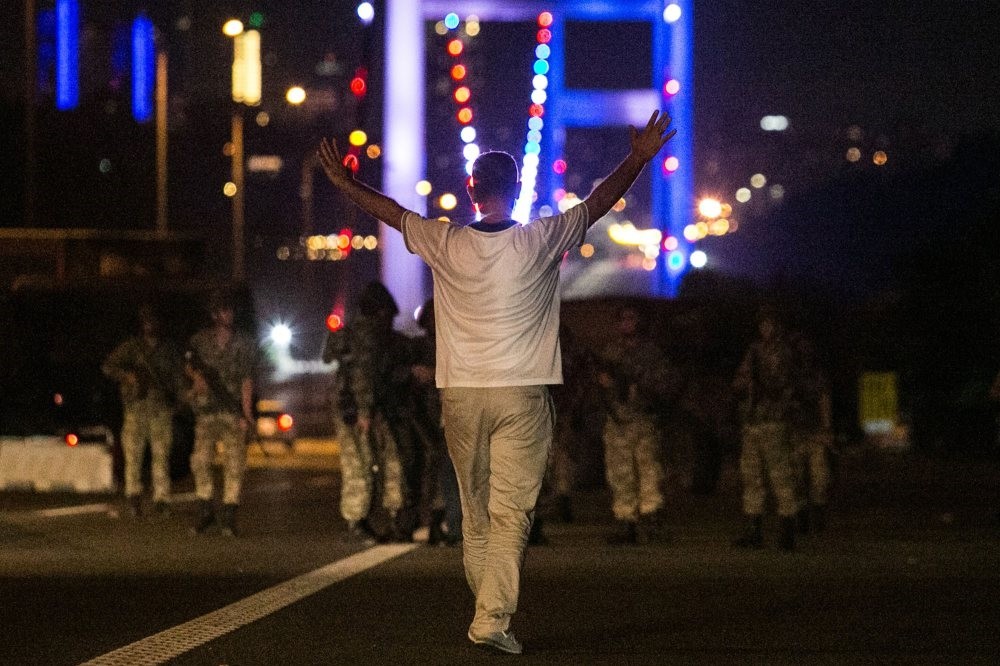 A civilian approaches Gu00fclenist putschist officers with his hands up at the entrance to the July 15 Martyrs Bridge, in Istanbul on the night of July 15, 2016 when Gu00fclenist terrorists attempted a deadly coup, killing 249 people and wounding thousands.
by Ragıp Soylu Jul 06, 2017 12:00 am

The Turkish people, who believed that they were righteous in their democratic resistance more than ever and expected worldwide sympathy, faced sad Western apathy and disdain.

In an impressive milestone in Turkish history, people last year flocked to the streets and prevented a full-fledged military takeover for the first time in Turkey. Yes, it was a healthy sign that Turkish democracy reached a point where coups were not tolerated, yet the popular uprising against a military regime also carried the risk of anti-European reactionism and paranoia about Western powers.

This is why in an article published last year, I humbly tried to convey a message to our allies: "I believe the United States, the European Union and Turkey's Western allies must support the democratically elected government with more than just simple words. Western leaders should show solidarity with the people of Turkey by attending or at least sending their envoys to the protests in the streets of Turkey. Undoubtedly this is a milestone in Turkish history, and its further success also depends on how the international community embraces it."

One can argue that setting a better course is each society's own responsibility, not Turkey's allies, for the sake of its own interest. However Turkey had a deeply traumatized public psychology that needed more Western support than mere statements. Instead of visiting Turkey, joining the crowds to celebrate Turkish democracy and encourage people to get over this violent incident, Turkey's allies focused on the aftershock spillovers.

I remember the Turkish people I know here in Washington and Turkey chastising all the Western leaders who were vocal against Ankara for their mistreatment of the coup plotters. "They don't care about us. They haven't shown any genuine sympathy for our loss other than some diplomatically crafted empty bunch of words. But they were eager to condemn what happened to the soldiers who tried massacre unarmed civilians," said one of my friends last year.

Thanks to the selective release of footage, assailant soldiers who killed dozens have become the victims in the eyes of international media outlets, because angry crowds have beaten them and in some cases, killed some soldiers in self-defense. One American Uber driver I met last month, who used to serve at İncirlik Air Base in the late 1990s, was shocked to learn that those beaten soldiers were indiscriminately killing the crowds on Istanbul's Bosporus Bridge – now known as the July 15 Martyrs Bridge. He thought angry "Islamist" mobs attacked them for no reason. "Weren't soldiers doing their job?" he asked me, underlying the secular fabric of the Turkish military.

It took more than six months for a head of state, Theresa May of Britain, to visit Turkey following the coup. Americans had a better sense of the situation and at least they sent U.S. Chairman of the Joint Chiefs of State John Dunford two weeks after the coup attempt. Yet his visit was also overshadowed by the fact that he was in Turkey for technical purposes, to ensure that İncirlik Air Base was functioning as usual, and the cooperation against Daesh was going smoothly. In late August, then-Vice President Joe Biden met Turkish leaders in Ankara, which had a great impact on Turks who were still furious at ambiguous messages that came from Washington on the night of the coup.

While Western allies not doing a great job of ensuring President Recep Tayyip Erdoğan or showing support, Russian leader Vladimir Putin sensed the opportunity and was among the first three leaders who called him to ask about his well-being. Erdoğan reciprocated this move with a state visit in August to Russia, which unnerved many Western officials.

All of my views on this issue can look futile to many. But societies become rather impulsive in certain traumatic incidents. The July 15 coup attempt was among these unfortunate disasters. The Turkish people, who believed that they were righteous in their democratic resistance more than ever and expected worldwide sympathy, faced sad Western apathy and disdain. All this further destroyed mutual trust and the friendship between Turkey and its allies, that is the fact of the matter.