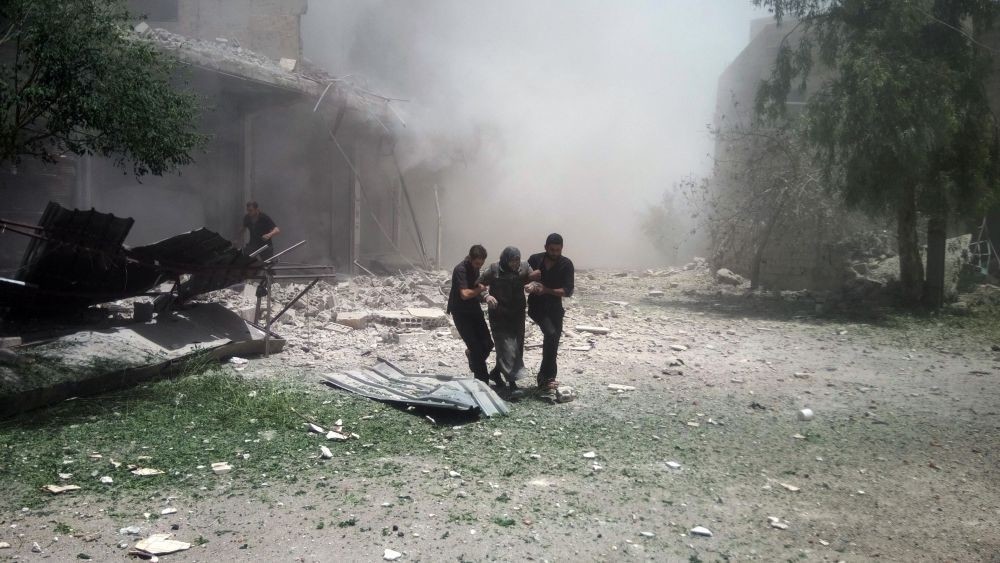 A cloud of dust is seen after a building collapsed as a Syrian woman is helped to leave the area following air strikes in the town of Kfar Batna, Damascus.
by Saadet Oruç Jun 13, 2016 12:00 am

Without achieving a concrete result in Syria and leaving the country in total chaos, the U.S. administration has become a tool for Assad's consolidation of his bloody authority and power

The RAND Corporation recently announced its second perspective on the future of Syria, suggesting an independent body to ensure peacekeeping in different parts of a "new Syria," which is not Washington or other regional actors.

The report, "A Peace Plan for Syria II: Options for Future Governance," is signed by James Dobbins, Philip Gordon and Jeffrey Martini.

Publishing an initial study at the end of 2015, the think tank had then suggested U.S. control the Kurdish-held parts of Syria while Russian guarantee was being proposed for the Damascus regime-held parts. Turkey and Jordan were the guarantors of the Sunni opposition-held parts of the country.

But now, instead of Washington or Moscow or Ankara, "non-engaged and therefore more neutral parties" to provide the role of guarantors to enhance security in a newly shaped Syria, which can be analyzed that the RAND Corporation is proposing the United Nations take a strong role in Syria.

The report also talks about the formation of a Kurdish autonomous area in Syria, but with a more realistic expression concerning the unacceptability of such an entity by Ankara.

The aim of the two RAND studies for Syria's future is declared as "arguing for practical steps aimed at reducing the fighting in Syria to provide more time for a national transition process."

The second report was published in such a circumstance that Washington is being prepared to welcome its new expert as the U.S. presidential race is heating up

So we can assume that at least the basic principles of the current U.S. administration are likely to be followed by the incoming administration.

Syria is a main failure of the Obama administration and is seen to be the battleground gained by the enemies of humanity's universal principles.

Both guilty of atrocities, Russia and the forces loyal to Bashar Assad that it backs seem to be the ones winning the battles in Syria.

And according to information leaked between the lines in the RAND report, someone in Washington might be seeking ways to withdraw from Syria, leaving the ground, perhaps, to the United Nations.

Assad's crimes against humanity in Syria are ignored in the future plans of the U.S. leadership as well as the Syrian opposition and their goal of getting rid of the dictator in Damascus and even the goal of wiping DAESH out from the country.

Without achieving a concrete result in Syria and leaving the country in a total chaos, the U.S. administration has become a tool for Assad's consolidation of his bloody authority and power.

This is game over for the Obama administration's Syria policy, which will mark the dirtiest page in the legacy of a U.S. president who came to office with promises of hope.

Another country that will elect its president next year is France. And the social and political atmosphere and strikes in the country are becoming the stage of noteworthy discourse from political figures.

As the increase of far-right votes is the key in the upcoming elections, every day we can hear statements from possible candidates that target ultra-right voters.

Following statements from Woman Rights Minister Laurence Rossignol and Prime Minister Manuel Vals that targeted women who wear headscarves, former President Nicolas Sarkozy took a step forward and declared that "those who want to live in France, which is a Christian country, must respect that reality."

France as the main source of secularism with its Laicity Law of 1905, at the same time has the largest Muslim population in Europe and, as far as I know, is a secular country. And since when has France been defined to be a Christian country?

Perhaps, Mr. Sarkozy, everything is legitimate for the elections.

As a final note, Sarkozy is not the favorite in the French presidential elections for the time being, according to the French media.
RELATED TOPICS