Turkish referendum through the eyes of European fascism 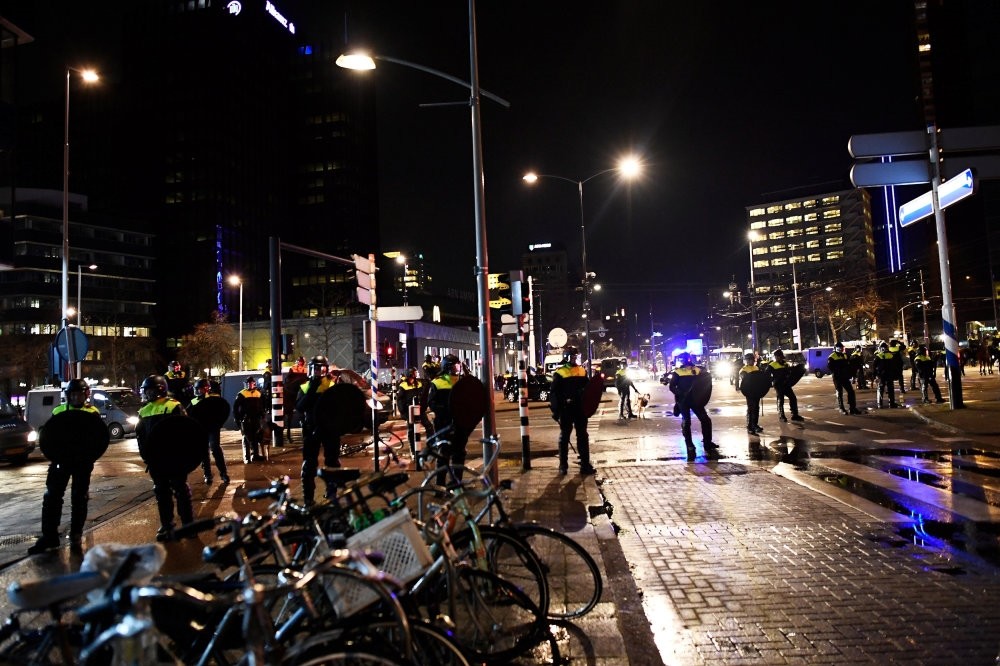 Dutch police stand guard during clashes with Turkish people protesting the Dutch government's scandalous treatment of a Turkish minister near the Turkish Consulate in Rotterdam, March 12.
by Saadet Oruç Apr 03, 2017 12:00 am

As Turkey approaches its critical vote for a presidential government system, Europe has restored fascism over its argument about the Turkish referendum. Let us be frank, the policies implemented by some European countries between July 15 and April 16 constitute clear discriminatory and imposing steps against Turkey.

Not all, but most of the European states do not respect the choice and will of the Turkish people in the April vote. We witnessed the same disrespectful behavior by European countries against Turkish people on the night of July 15, when Turkish people showed heroic resistance against a military coup but was left alone and even criticized by Europeans.

The Netherlands's scandalous treatment of Turkish ministers, Switzerland allowing a placard that read "Kill Erdoğan" in a pro-terror demonstration against Turkey, Germany's permitting of pro-PKK rallies and the preventing of Turkish ministers from meeting fellow EU citizens of Turkish origin in their countries, all indicate the European countries fascistic attitude. Turkey has been preparing itself for a years-long expected referendum and it is quite normal to organize events in European countries to meet with Turkish people in those countries. However, Turkey unfortunately faced discriminatory and aggressive opposition for that opinion.

"If you do not think like us, you do not deserve the right to survive," that is the current motto of Europe's German parenthesis and it shows the chaotic atmosphere of how a fascist ideology is on the rise in European countries.

All the world is witnessing how European countries are surrendering to fascism and their arguments over Turkey for the referendum and the July 15 resistance are unacceptable. Nothing or no one can explain this unfortunate enmity.

The headlines of European newspapers, statements by their decision makers, which are always in an aggressive and hostile position, confirm a serous front established to destroy Turkey's own destiny.

And an image of European leaders together with the Pope at the Vatican is historical proof for the real face of the 28-state union. Let us keep this photo in our memories and if someone happens to try to accuse Turkey for "Islamism," please show evidence of "Christianism."

The City Where History is Being Written on Stones

We visited our country's southeastern city of Diyarbakır on Saturday for a meeting held by President Recep Tayyip Erdoğan about the upcoming April vote.

As presidency staff preparing for the election campaigns, we made our way to the city center from the airport. Posters hung from the balconies of local houses welcomed us and some even had messages inviting President Erdoğan to have a tea. Another placard read, "Reisim hoşgeldin" (Welcome my leader).However, another sign touched me more than any other one in the city, it read, "Our President, welcome to the city of Diyarbakır, the history of which is written on stones."

Diyarbakır is a city on which steps of endless hostile social and political engineering have been taken so far. And recently, the PKK terrorist organization tried to destroy this city by digging ditches in the streets. It tried to damage the culturally rich town by attacking mosques and historical buildings.

However, the habitants of the city, themselves, used their own judgment against terrorists and they did not let them continue their violence and terror.Diyarbakır is now, hopefully, getting prepared for the new presidential government system, which will pave the way for the participation of the youth of the city for politics rather than terror.

"They take you to Qandil [the mountaintop headquarters of the PKK terrorist organization], but we invite you to Parliament," President Erdoğan said in his speech in Diyarbakır. He emphasized that the state is the state of everybody in the country, without making any discrimination among Turks, Kurds, Bosnians, Circassians or anyone for that matter. The president also expressed Turkey's determination to defeat PKK terrorism. The Diyarbakır meeting's summary confirmed that the habitants of this city have started to get into harmony with the state after being hurt by PKK terrorism for years.
RELATED TOPICS