'Mom, have you ever seen an orange ladybug?' 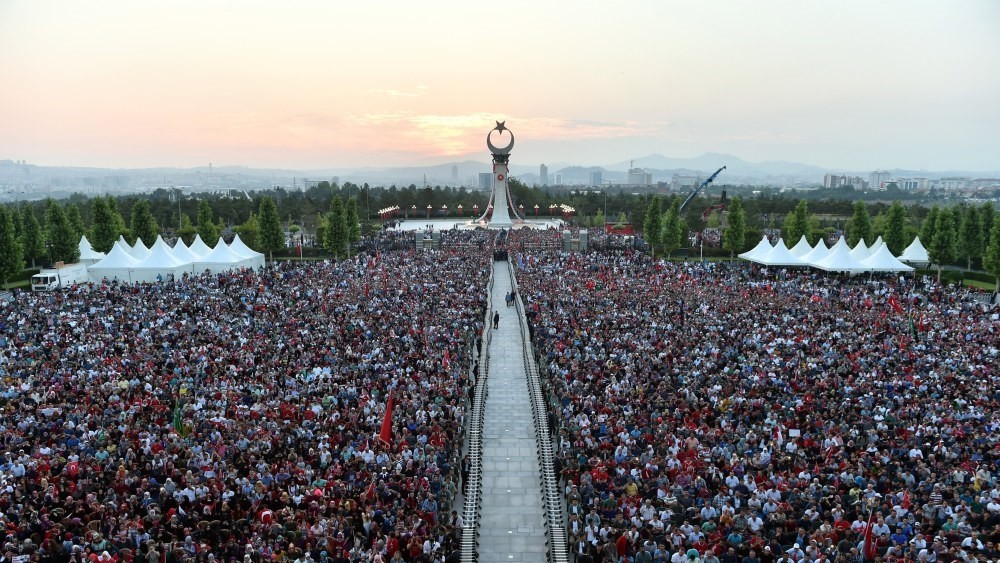 The crowd at a ceremony to mark the first anniversary of the failed coup attempt in front of the new monument for martyrs at the Presidential Palace in Ankara, July 16.
by Saadet Oruç Jul 21, 2017 12:00 am

Children's questions are always full of innocence and their imaginations are always able to describe reality in the clearest form. I must confess that it comes from the fact that we do not have any single reality other than the undestroyed dreams and the fairytales of our children.

Let me tell a true story of a child I recently saw:

Following a nearly 12-hour meeting of the National Security Council (MGK) and the Cabinet, President Recep Tayyip Erdoğan and Prime Minister Binali Yıldırım surprisingly visited the Monument of Martyrs erected just in front of the Presidential Palace in Ankara's Beştepe district. It was nearly midnight and thousands of people were there during the official visit to pay their respects to the memories of those who were killed on the streets in the July 15 coup attempt. At that moment, the people were surprised to see the two leading figures of the country's politics at such a moment.

Children accompanying their parents were also there, watching the president with great interest, and one of them greeted Erdoğan, receiving a response as if from a grand-dad, and not the leader of a country. Meanwhile, the crowd was trying to speak with the two leading politicians and to take some selfies, just as the hundreds of thousands of people gathered in Istanbul to commemorate the first anniversary of the coup attempt. Watching this unexpected and very natural gathering from a distance, a little girl playing with something on the ground drew my attention.

"Mom, look there is an orange ladybug here. Have you ever seen an orange ladybug?" she was shouting to her mom and watching the president with a happy smile on her face. Apparently, that little girl was dreaming of a fairytale and telling her mother about it. She was able to dream peacefully at such a moment when the two leading figures of the country were gathering with their people one year after a very bloody coup attempt in which 249 people were killed and another 2,000 were wounded. What she was indeed able to do at that moment was to dream. Yes, only dream. It was of course thanks to the spirit of the martyrs who fearlessly took to the streets to defend their country on the night of July 15.

Contrary to the children of Syria or Iraq or any other country, experiencing international operations or civil wars, Turkish children can still keep their dreams and fairytales undestroyed because of the historic and heroic resistance of the Turkish people against the coup attempt.

And then I asked myself whether we have any other reality than the undestroyed fairytales and dreams of our children. I guess, the answer is no.