Catalonia and the collapse of the EU's sacred regional policy 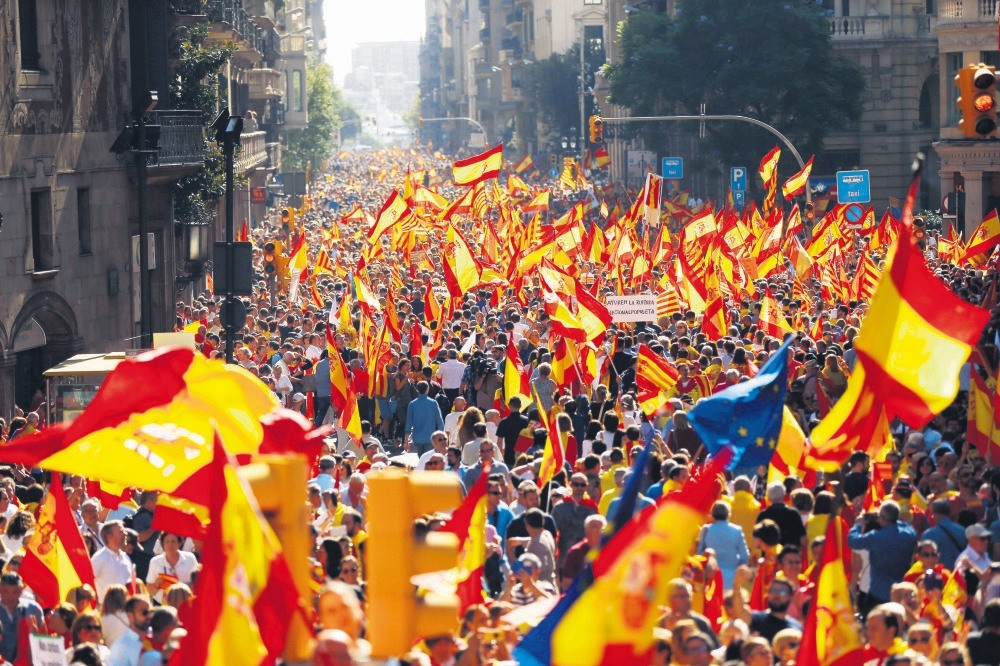 Thousands of people march to protest the Catalan government's push for secession from the rest of Spain, Barcelona, Oct. 8.
by Saadet Oruç Oct 10, 2017 12:00 am

The EU's strategic policy on regions, designed to enhance quality of life, solidarity and support for less-developed regions, failed to recognize the Catalans' freewill and choice

The recent referendum held in Spain's autonomous region of Catalonia has revealed that the basic policies of the EU, including its regional approaches, have already collapsed.

The situation between the central government in Madrid and the Catalan region, as well as the EU's dilemma in the aftermath of the referendum, are both noteworthy.

Single-handedly, the independence referendum in Catalonia confirmed the hypocrisy and the double standards that have dominated the political environment of the 28-member bloc.

One-third of the EU's budget has been spent on its regional policies, which aim to make Europe's regions and cities more competitive and stronger. As a result of the referendum, the unity and sovereignty of member states have been strongly accentuated.

Despite the Catalan region's demands, the EU did not take a mediating role and placed emphasis on the importance of the Spanish constitution.

Even the scenes of police violence designed to block the vote did not receive any serious reaction from EU institutions, which defended the right of Spain to protect the requirements of its constitution.

The EU's strategic policy on regions, designed to enhance quality of life, solidarity and support for less-developed regions, failed to recognize the freewill and choice of Catalans.

More than 90 percent of the Catalan electorate support independence from Spain, a fact minimized and even ignored by the EU as a whole.

Currently on the agenda, Madrid's revision of the current status of Catalonia, which may lead to the implementation of Article 155 of the Spanish constitution, paves the way for the central government's control over autonomous regions in the case they pose a threat to the stability and security of the country.

Supporters of the Madrid central government in Barcelona are now organizing a counter protest for next Sunday, which may escalate the already tense situation in Catalonia. Efforts to reverse the current equilibrium dominate the political scene in Spain.

The long-awaited speech from Catalan President Carles Puigdemont on Wednesday night focused on the recent address of King Felipe VI of Spain, who accused the Catalan leadership of "unacceptable disloyalty" in place of addressing the independence announcement.

Despite that Catalans are preparing to announce their independence, they did not, ironically, refrain from asking for support from the Spanish monarch. Puigdemont said that the king had missed an opportunity to mediate in the political and constitutional crisis that has engulfed the country. Interestingly, an actor who is defending the people's right to determine their own fate in an attempt to create a more democratic picture is now asking for help from the king. Even though the monarchies in the EU states that have them are mostly symbolic in stature, critical times often set them as keys for solving crises, as with the case in Spain.

Moreover, the so-called EU values such as the freewill were also set aside when it came to the political calculation made in Brussels regarding the Catalonia issue.

Likewise, the EU was thrown into chaos in the aftermath of the Brexit vote, and the Catalan dilemma has now also deformed the spirit of unity among the people of the EU. A different approach to state structure is being introduced in light of the Brexit and Catalan referendums. We could perhaps argue that the rise of the far right and nationalism is also influential in this new trend.

Now, all eyes have turned to Puigdemont, who announced on last Tuesday that his government would declare independence by the beginning of this week.