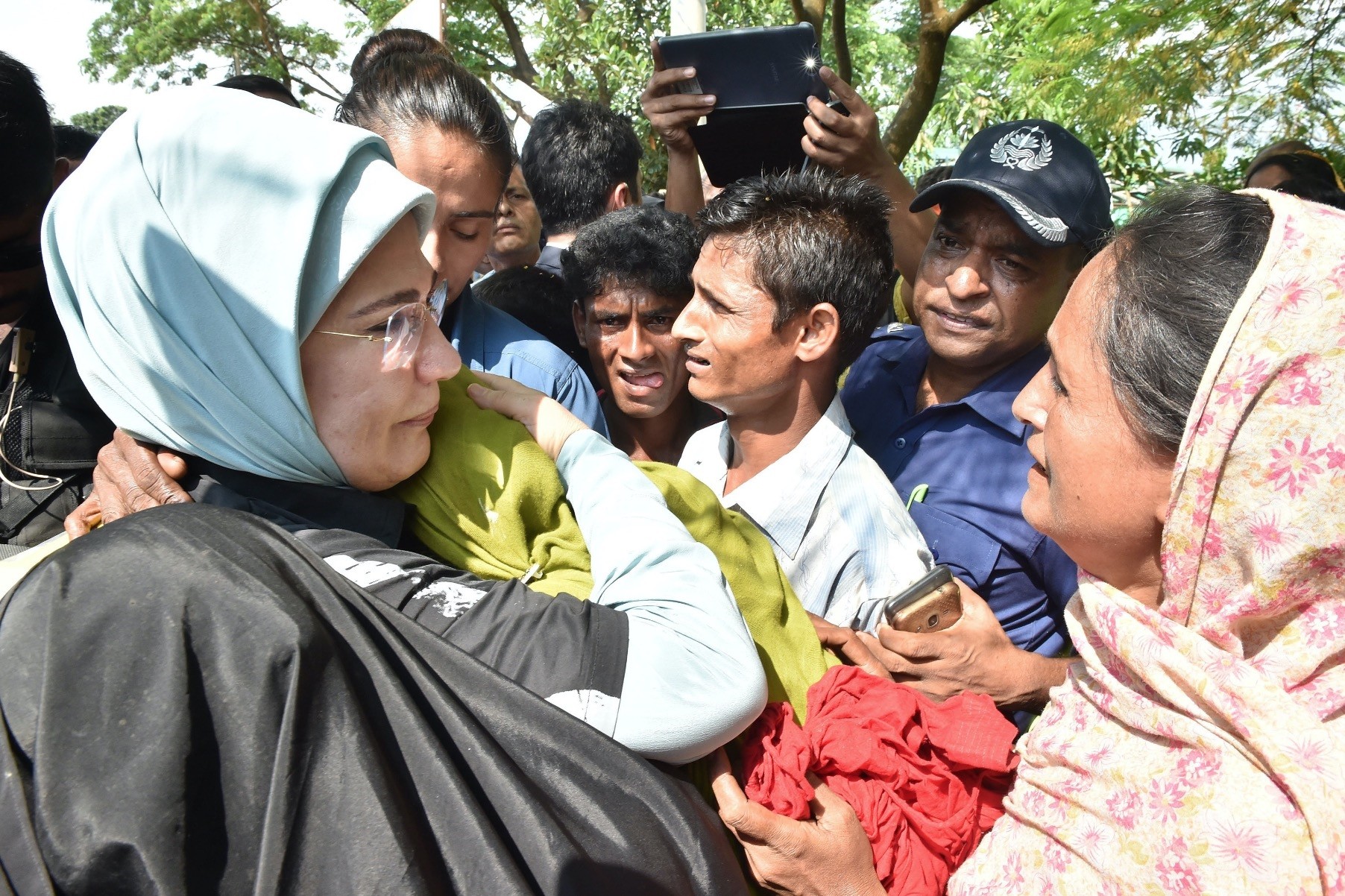 First lady Emine Erdou011fan (L) hugs a Rohingya refugee who fled from the Myanmar government's brutality at a makeshift camp near Coxu2019s Bazar, Bangladesh, September 2017.
by Saadet Oruç Sep 14, 2018 12:00 am

First lady Emine Erdoğan's humanitarian campaign promises hope, not only for the suffering Rohingya people but also for many other helpless people around the world

In a world where the needs and suffering of "others" is not a matter of concern for the majority of global decision makers, Turkey serves as an example of humanitarian foreign policy. In addition to the efforts of President Recep Tayyip Erdoğan and senior government officials, first lady Emine Erdoğan has become known for her humanitarian services, raising hope for oppressed people all over the world.

This week, the first lady received an award at an international forum in London in recognition of her humanitarian services.

"The Turkish nation is a philanthropic nation with a deep-rooted history of charitable foundations," she said, in her acceptance speech after receiving the Humanitarian Service Recognition Award at the Global Donors Forum. The first lady stated that, "Turkey is the largest donor of humanitarian aid in the world in ratio to its gross national income."

"I receive the Humanitarian Service Recognition Award on behalf of such a noble nation which represents the conscience of humanity," expressed the first lady. Her recent assistance for Rohingya Muslims in the Arakan region created awareness on the atrocities suffered by them.Hosting around 4 million Syrian and Iraqi refugees and spending $32 billion on their needs, Turkey has become well-informed on the solutions needed to abate the refugee crisis. While the European Union faces one of its biggest crises because of refugees on its border and its refusal to shelter people in need of basic things, Turkey once again serves as an example.

Yes, it is a fact. Western societies reject any reconciliation with other identities, such as Muslim refugees and foreigners. Thousands of people have lost their lives on refugee boats during their passage via the Mediterranean Sea from North Africa or the Middle East to Europe.

As European decision makers prefer to keep refugees outside their borders, the number of refugee boats sinking increases, which raises the question of whether steps are being taken to prevent the flow of refugees without taking into consideration human casualties.

When it comes to Palestine, Gaza, Somalia or any African country, Ankara is able to present a different vision in foreign policy that takes the suffering of people into consideration. Turkey follows a different vision on Africa, which suffered centuries of colonialist policies of the Western states. This vision depends on mutual interests, the reconstruction of oppressed countries and complete renewal. Turkey's approach rejects the old tradition that "when elephants fight, it is the grass that suffers."

Regarding the developments in Idlib, Turkey again defends the right of survival of innocent people, while other actors make brutal calculations that may lead to another catastrophe.

Erdoğan emphasized the importance of a cease-fire during last Friday's summit held in Tehran with the participation of the Iranian and Russian presidents. Now, Turkey's arguments are being supported by leading actors in international bodies, including the United Nations. Where injustice has become a principle of the "modern" world, Turkey's foreign policy saves the honor of humanity.