Erdoğan's summit diplomacy and the legacy of the Antalya summit 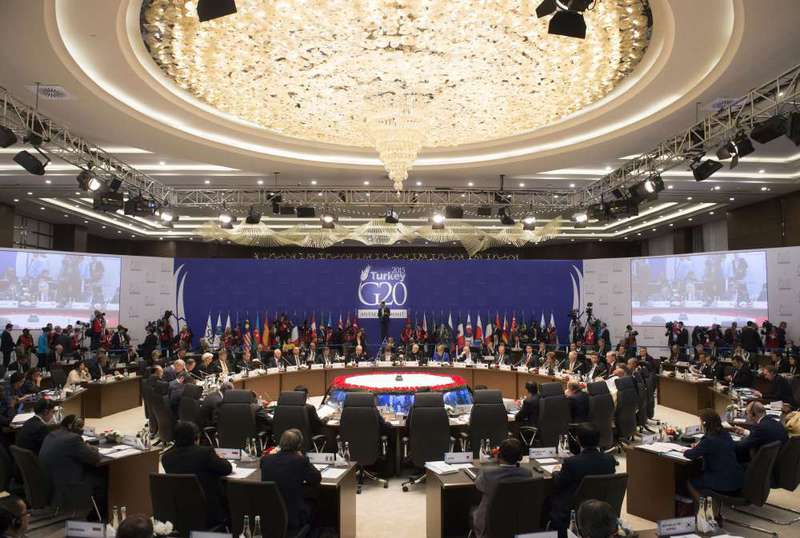 World leaders at the G20 summit in Antalya discussed many issues ranging from the global economy to the refugee crisis and the threat of terrorism.
by Sadık Ünay Nov 17, 2015 12:00 am

The G20 Leaders Summit in Antalya started, as ever, with colorful scenes displaying world leaders, business tycoons and civil society mentors operating in a cheerful theater of global governance despite the shocking news that came from Paris only hours before. The heinous terrorist attacks in Paris, which took the lives of at least 130 people, obviously changed the mood and had a substantial effect on the flow of discussions toward more emphasis on security issues, the war in Syria and global cooperation against terror. After all, while the summit was still in progress, news have arrived that French air force jets were bombing DAESH targets in Raqqa, Syria in a move that was interpreted as retaliatory action by many observers. The potential rise of another wave of neo-fascism and Islamophobia in Europe, as well as a radical transformation in the attitude of EU leaders toward liberalizing refugee policies were raised as serious concerns.

Meanwhile, global media outlets continued to give updates on the Paris attacks and at the same time focused on planned and ad hoc bilateral meetings among the global leaders at the G20 platform. The meeting between President Recep Tayyip Erdoğan and U.S. President Barack Obama provided ample PR material thanks to friendly gestures among the two, and in the press conference Obama made an additional gesture by using DAESH instead of ISIS to refer to the terrorist organization for the first time. In Paris, French President François Holland was also using the same term to lament the terrorist attacks committed in a way to confirm the conceptual victory of the terminology that Erdogan insisted on using in order to refute the claim of a terrorist organization to represent an Islamic state or caliphate.

Turkey attached great importance to the success of the G20 summit and the impeccable organization around the beautiful surroundings of Antalya will be surely remembered for years to come. In terms of the subject matter on the agenda, Turkey's particular contributions on the inclusiveness front have been quite substantial thanks to the foundation of Women 20 (W20), Youth 20 (Y20) and Academy 20 (A20). Furthermore, the emphasis on inclusive development through empowerment of small- and medium-sized enterprises (SMEs) was well placed as seen with the organization of the first Global SME Finance Forum. Thematic contributions to agricultural and rural development and energy efficiency and sustainability are also to be commended along with the monitoring mechanism that was founded to follow the implementation of structural reforms by member states.

Erdoğan brought all these contributions to the attention of a global audience in his typically sharp style by placing emphasis on justice and advising the tycoons in the B20 Forum to sacrifice some of their profits and share the money they create with working communities. This virtuous approach not surprisingly attracted praise from the global representatives of labor unions, which stated the need for leaders stressing socio-economic justice. Needless to say, Erdoğan's unrivalled political communication skills with the global leaders and his able use of body language dominated much of the domestic and international media coverage from the summit, providing a rich reservoir of visual material for social and conventional media pundits.

In its essence, the most important legacy of the G20 Leaders Summit in Antalya will be a renewed self-confidence and "can do" psychology for Turkey in global politics and the world economy following months lost amid political instability and terror attacks. The summit gave a strong signal to the international audience that Turkey is an indispensable political and economic partner in the world system that continuously stresses peaceful and value-oriented approaches to humanity's common problems. It galvanized the image of strong and reliable political leadership, predictability in governance and enthusiasm for structural reforms. The coming months are likely to herald a new period of reconstruction through constitutional reforms that might evolve toward a presidential system, democratization attempts and structural changes in the economy. The moral boost provided by the G20 summit to Turkey's renewed self-confidence and will for domestic transformation will be felt for many months to come.
Last Update: Nov 17, 2015 1:49 am
RELATED TOPICS