Turkey's referendum is a litmus test for European democracy 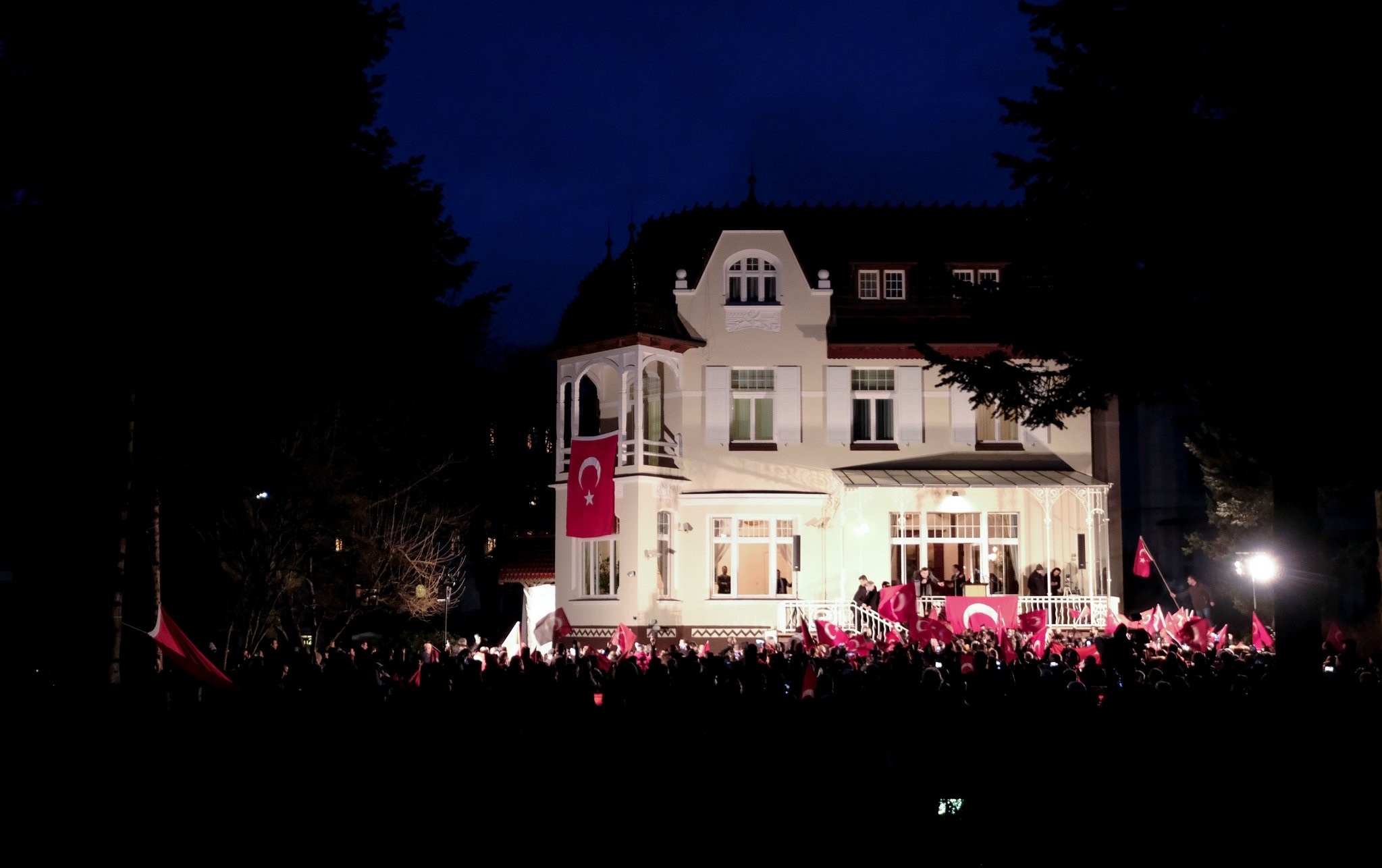 Turkish people gathering at the residence of Turkey's consul general in Hamburg to protest the German gov't after Turkish Foreign Minister Mevlu00fct u00c7avuu015fou011flu's meeting on the upcoming referendum in Hamburg was cancelled by German officials, March 7.
by Sadık Ünay Mar 11, 2017 12:00 am

The referendum campaign for a presidential system, which represents perhaps the most internationalized electoral contest in Turkey's political history, has also turned into a litmus test for the democratic credentials of key European countries

As the heat keeps rising in domestic politics on the campaign trail for Turkey's constitutional referendum, a series of unexpected moves by European leaders in contravention of the rule of law are rapidly internationalized the issue. The critical referendum on April 16 represents the harbinger of a new era in Turkey's governing structure and the official elimination of institutional tutelage forms if the transition to a presidential system is approved through popular vote. Systemic change is vital as it will end the division of managerial authority between the executive branches of the Presidency and Prime Ministry, alleviate weaknesses in the democratic regime that have so far paved the way for occasional interventions by the army or infiltration attempts by sinister organizations such as the Gülenist Terror Group (FETÖ) and prepare the ground for more effective macroeconomic management.

In a nutshell, the projected transition to the presidential government system is thought of as a comprehensive institutional restructuring aimed at improving the effectiveness, strength and performance capacity of the Turkish state, while forming direct linkages between political representation and democratic legitimacy. Yet, the towering political presence of President Recep Tayyip Erdoğan as the unique political actor who could push for such a radical institutional transformation unavoidably attracts the attention of the global community to the usual "who wins?" question. The general conclusion reached indicates that the democratically elected president (read Erdoğan) will be a much more powerful figure after the systemic change by bypassing existing channels of institutional tutelage and progress faster in his global agenda.

It is exactly at this point that a domestic electoral issue became internationalized, and especially key members of the European Union became involved in different forms of competition with Turkey, including Germany, the Netherlands and Austria, carelessly entered the frame on the "no" side of the campaign. In a clearly coordinated and semi-authoritarian manner, European political leaders tried to prevent the extension of political campaigning among the millions of Turks living on their soil, cancelled public meetings in which Turkish ministers were invited and exerted pressure on civil society institutions leading the campaign work.

Obviously, every democratic state has the right to make its own decisions when it comes to allowing campaigns for an ongoing political process abroad and enjoys autonomy in public policy. However, it is also within the confines of universal civil rights and liberties to organize peaceful meetings, events and demonstrations to support or oppose a political agenda. Given the fact that around 5 million Turks live around Europe with more than 1 million carrying Turkish passports along with their European citizenship, it is conceivable that every crucial political development in the homeland will have repercussions for the expat community.

Moreover, it has become a custom for Turkish political parties to campaign across Europe on the eve of every major election to gather the support of the Turkish community abroad. Therefore, when German, Dutch or Austrian authorities simultaneously start to produce superficial pretexts for cancelling campaign programs on the eve of this referendum, we can only come to the conclusion that they feel strong unease about the potential repercussions of a "yes" vote on Erdoğan's statute and Turkey's global standing.

On the other hand, it is a poorly kept secret that Germany and other European countries have been providing safe havens for the majority of terrorist organizations and illicit networks perpetrating various forms of attacks on Turkey, such as the PKK, the Revolutionary People's Liberation Party-Front (DHKP-C) and FETÖ, for years. Members and sympathizers of these terror organizations experience no difficulty whatsoever in organizing political meetings, demonstrations, or events in European capitals, while the addresses of various Turkish ministers across Europe were blocked through bureaucratic meddling.

Recent electoral polls suggest that a "yes" vote will easily emerge in the referendum given Turkey's current political configuration in which the incumbent Justice and Development Party (AK Party) and the Nationalist Movement Party (MHP) are collaborating. However, the referendum campaign for a presidential system, which represents perhaps the most internationalized electoral contest in Turkey's political history, has also turned into a litmus test for the democratic credentials of key European countries. The double standards, subjective attitudes, undemocratic blockage attempts and hostile rhetoric of European leaders feeling pressure from rising far-right and neo-Fascist movements will not be forgotten. While Turkey continues to consolidate its democracy, the future of European democracy seems in tatters.
Last Update: Mar 11, 2017 1:05 am
RELATED TOPICS