Chemical attack and US retaliation: PR stance or policy shift? 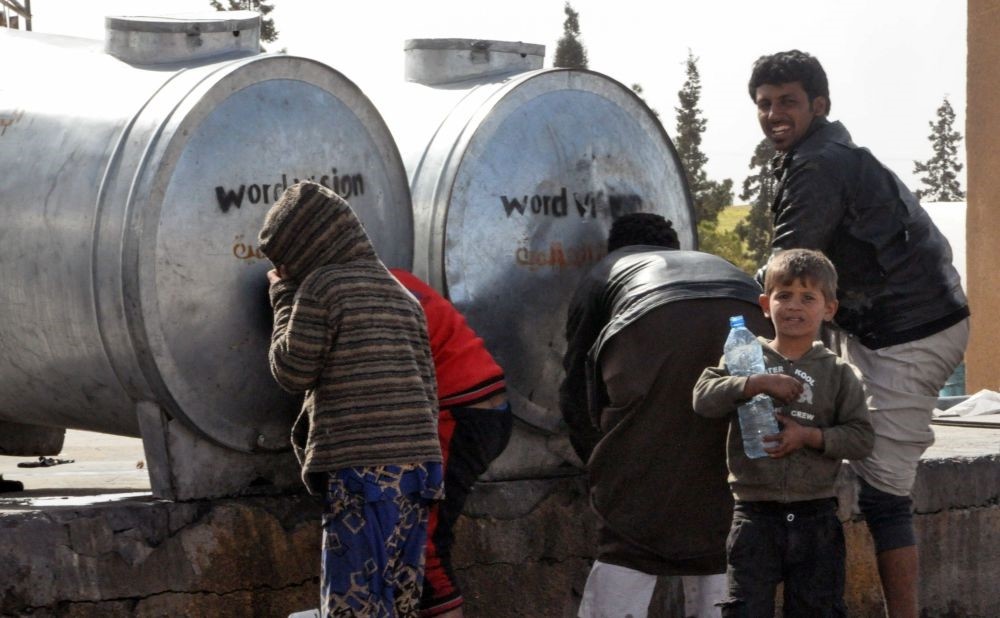 Displaced Syrians, who fled the countryside surrounding Daesh stronghold areas, are drawing water from tanks at a temporary camp in the village of Ain Issa, April 6. (AFP Photo)
by Sadık Ünay
Apr 08, 2017 12:00 am

Whether the missile attack was intended as just another PR opportunity for Trump or it represents a real turning point in the U.S.'s Syrian policy remains to be seen

The flow of history seems to be accelerating in the prolonged and bloody Syrian War, juxtaposing great power rivalries, regional backstabbing and widespread human suffering on the ground. On Tuesday, the whole world witnessed one of the most despicable chemical attacks by Assad's regime forces in recent years in the Khan Sheikhoun town of Idlib province, which brutally killed more than 100 civilians, most of them women and children. As expected, this war crime and crime against humanity, which turned a town into a toxic kill zone, incited outrage among the international community in the face of the ever-increasing impunity of the regime over the course of the war.

Tuesday's attack represented the largest and most toxic chemical attack in Syria since the preceding attack in August, 2013, when over 1,400 civilians were murdered by Assad's forces in the suburbs of Damascus with sarin gas. While chlorine gas attacks have become almost routine in Syria, this attack was qualitatively different, as numerous people collapsed outdoors with suffocation, suffering from fluid in their lungs, unconsciousness, spasms and paralysis; pinpointing the use of nerve agents and other banned poisons.

In terms of international politics, this milestone attack signified the collapse of the compromise reached following August 2013 under the leadership of the U.S. and Russia for the elimination of Syria's chemical weapons arsenal. As is well known, there was lots of strong political rhetoric from the Obama administration, full of "red lines" and threats of retaliation, but in the end, the U.S. failed to act on its promises; paving the way for Putin's successful and proactive entry into the Syrian war theater in the following months, which changed the balance of power on the ground.

Since 2014, there were many instances during which the Assad regime used chemical weapons with impunity in local assaults, relying on the support of Russia and Iran; as well as the presumed apathy of the U.S. and the EU. The Khan Sheikhoun chemical attack was the latest brazen statement of impunity, which came during a major international conference in Brussels where the EU officials were discussing the reconstruction of Syria; and — another distant vanguard — Chinese President Xi Jinping was officially visiting Donald Trump in the US.

Pretty much everyone in the international community was convinced that among the warring parties on the ground, only the Syrian military had the technical ability and political motive to carry out the aerial attack that struck Khan Sheikhoun, but the Russian propaganda machine was quickly activated to disseminate an alternative narrative. Accordingly, the warplanes of the regime had — almost accidentally — bombed a storehouse controlled by the opposition containing toxic substances to be used in chemical weapons; a story hardly believed by anyone, especially given the fact that hospitals treating the wounded were also bombed soon after. Infuriated by the inhumane chemical assault, various governments (including Turkey's), humanitarian agencies and NGO's demanded swift action from the U.N. Security Council (paralyzed since 2011), to prevent a repetition of the assault; while pressure started to mount on the Trump administration on the basis of their grandiose promises to "make America Great again."

As for Donald Trump, who has been underlining the Obama administration's fatal failures in the Syrian crisis, the chemical assault posed a major challenge, exposing contradictions in his personal position on military intervention in Syria. Following the chemical attack in August 2013, Trump had infamously shared tweets urging President Obama not to interfere in Syria militarily as there was "no upside and tremendous downside" for the U.S. But in his new position as the U.S. president, Trump started to strongly criticize the indecisiveness of Obama in the face of a chemical threat transgressing the so-called red lines; and stressed that the "reprehensible attack" against innocent people in Khan Sheikhoun cannot be ignored by the civilized world. Following his tough statements, the Shayrat Airfield near Hums, which was used by the Assad regime for the launch of the chemical attacks, were hit by around 60 Tomahawk missiles, displaying direct retaliation for the chemical attack.

Whether the missile strike was intended as just another PR opportunity for Donald Trump to demonstrate the upgraded posture of the U.S. in global security matters, or represents a real turning point in American foreign policy towards Syria, remains to be seen. After all, it was only days ago that the administration declared that their priority in Syria was fighting Daesh, and pushing for regime change was not on their agenda, because Assad represented a "political reality." But if Trump wants to galvanize his posture as a strong global leader who can challenge Putin and if the American war machine is truly committed to entering the Syrian theater against Russia with full force, then the whole world shall brace for rising geopolitical tensions.